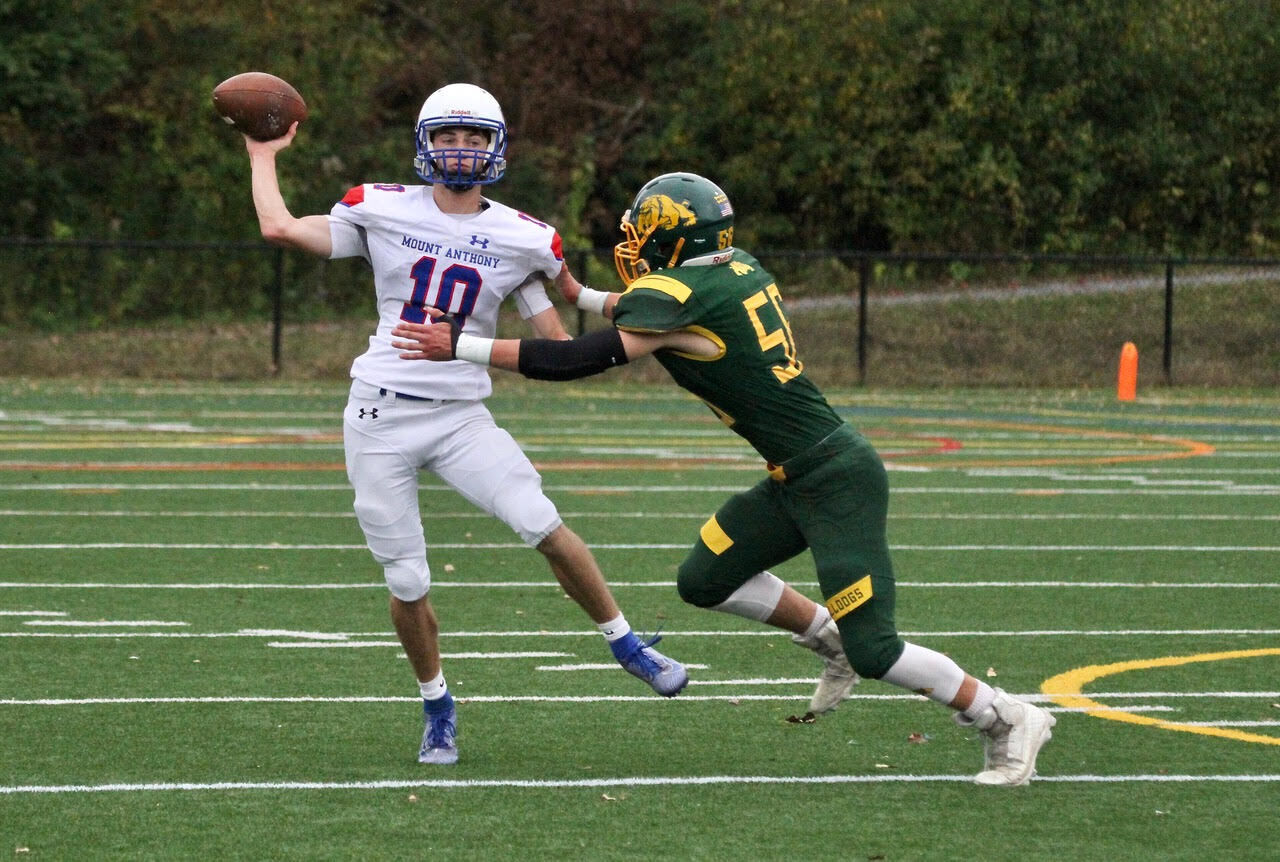 MAU quarterback Tanner Bushee threw five touchdown passes and also had a rushing TD versus Burr and Burton on Saturday. 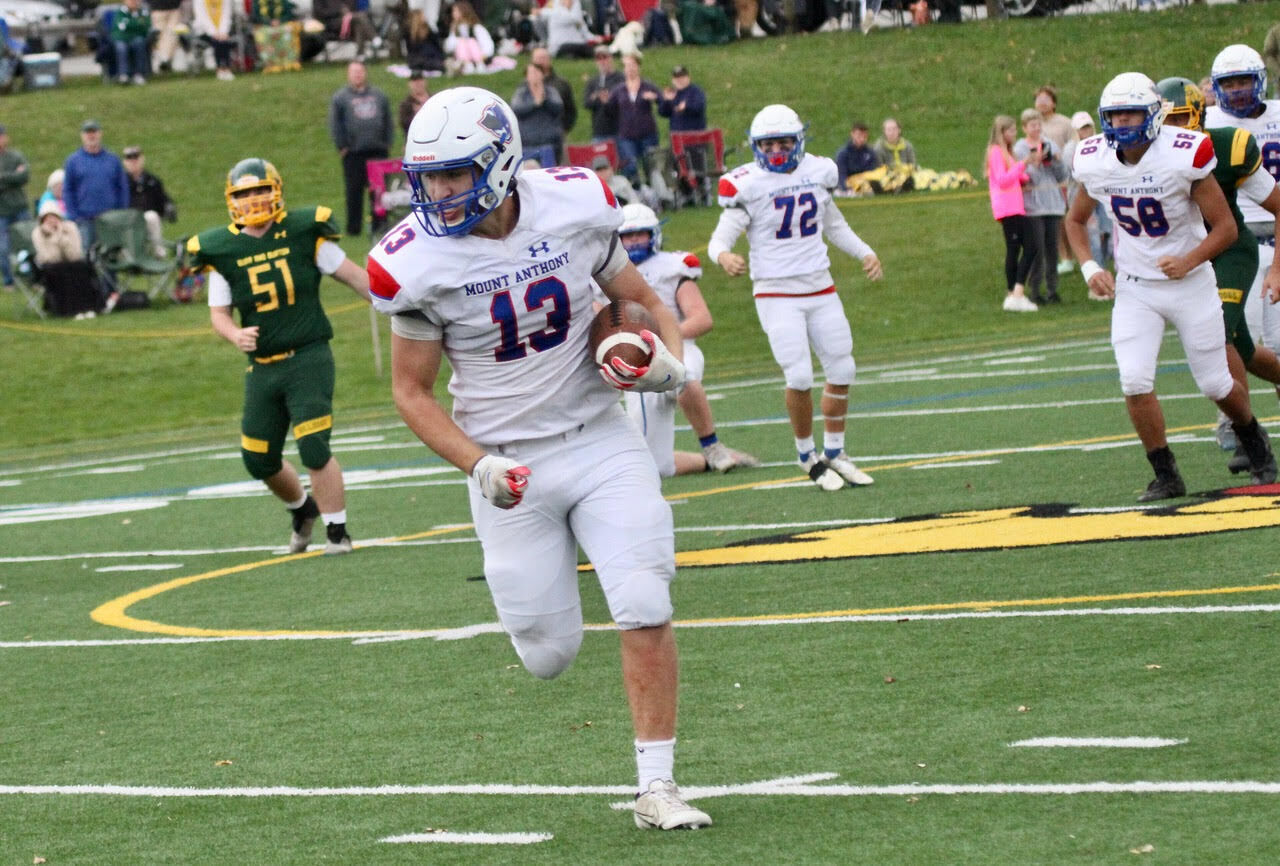 Braeden Billert gets yards after catch following one of his five receptions for the Patriots. 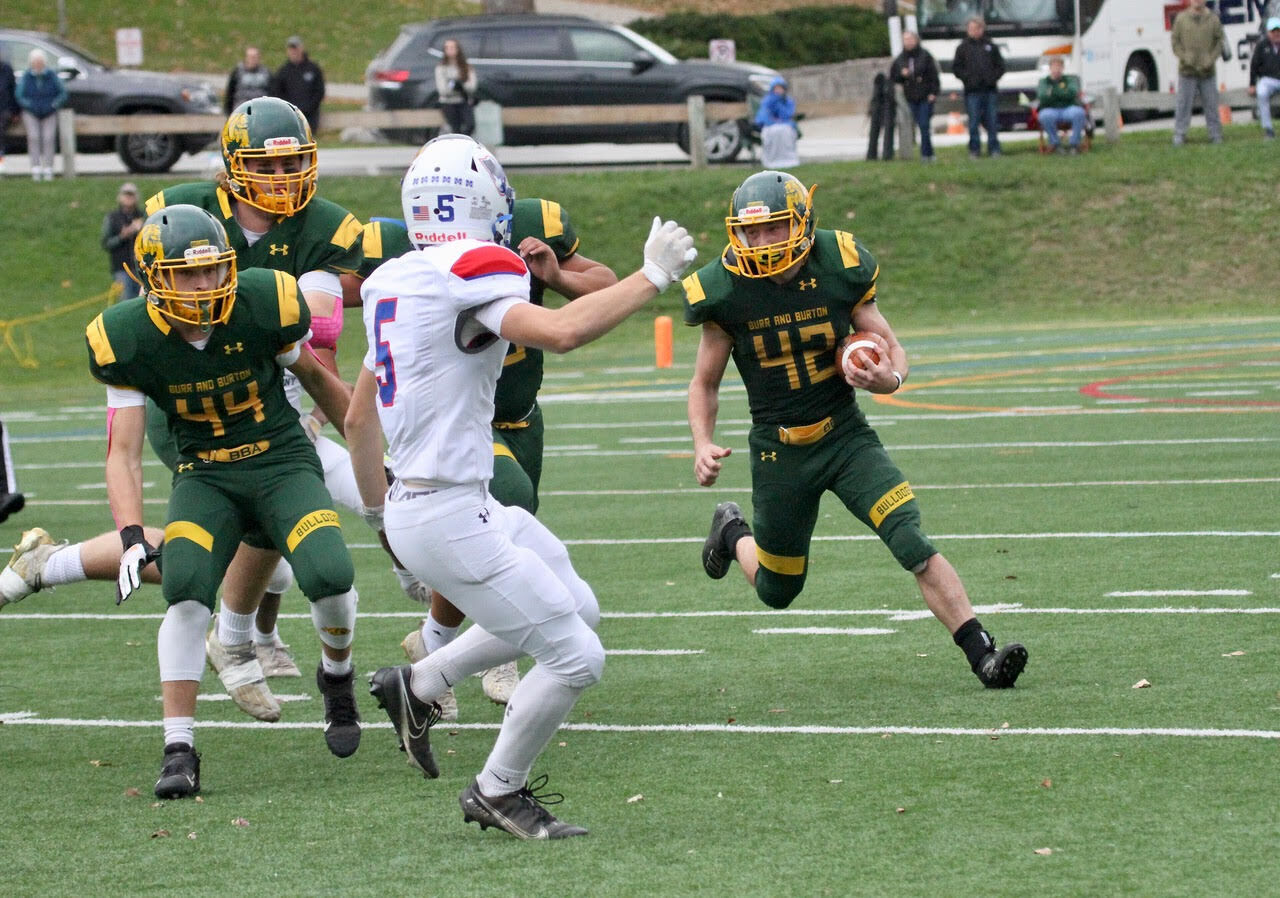 Haiden Jones runs the ball for the Bulldogs in Manchester.

MAU quarterback Tanner Bushee threw five touchdown passes and also had a rushing TD versus Burr and Burton on Saturday.

Braeden Billert gets yards after catch following one of his five receptions for the Patriots.

Haiden Jones runs the ball for the Bulldogs in Manchester.

MANCHESTER — With Indigenous Peoples’ Day just around the corner, Burr and Burton’s defense made a discovery of its own.

The sophomore quarterback fired five touchdown passes and ran for another score, leading the Mount Anthony Union varsity football team to a thrilling 40-34 comeback victory over the host Bulldogs on Saturday.

“In the second half, our o-line started giving me time to throw,” said Bushee.

Trailing 34-18 with 12:49 remaining, the Patriots scored the last 22 points of the contest to beat the Bulldogs for the first time since 2004.

Bushee threw scoring strikes to Ayman Naser (7-yarder), Austin Grogan (10-yarder) and Carter Thompson (30-yarder) during the late rally. With the score knotted at 34-34, Thompson was left uncovered on a fly pattern for the game-winning connection at the 1:09 mark.

“We have some really good receivers on this team,” noted Bushee, who went 21-of-32 through the air for 315 yards. “Austin is a senior, Braeden (Billert) is a huge target, and Carter is fast.”

The Bulldogs scored on their first four drives to go ahead 28-6. Trevor Greene caught three touchdown passes, including two from Will Addington and another from Daniel Scarlotta on a fullback pass that traveled 30 yards through the air.

Burr and Burton (2-4) controlled the line of scrimmage in the early going, pounding the ball behind the likes of Warren McIntyre, Miles Kaplan, Jakob Crossman, David Keyes and Nate Brenner. Haiden Jones was the workhorse, carrying the ball 26 times for 147 yards on the afternoon.

“Our defense really picked it up in the second half,” Bushee mentioned.

Grogan recovered a fumble for the MAU defense, which limited its foes to just a couple of first downs in the final quarter. After Jones’ short plunge into the end zone made it 34-18 late in the third, the Bulldogs punted, turned it over on downs, and coughed it up as the Patriots (4-2) battled back.

The visitors mixed it up — usually handing off to Hayden Gaudette for some tough yards on the first down and then letting Bushee go to work. The Bulldogs, on the other hand, never threw the ball in the second half, running it 18 times for 85 yards.