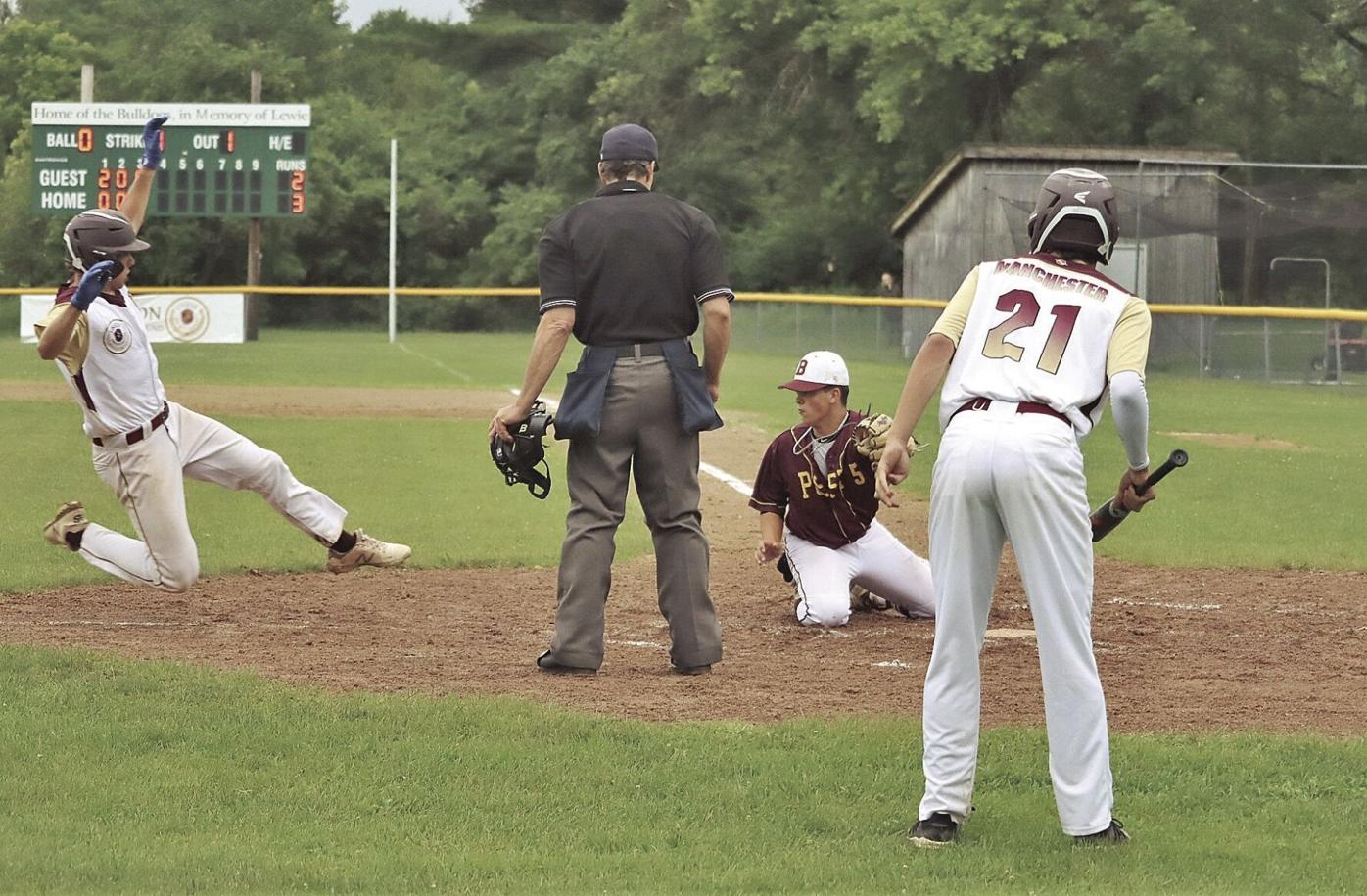 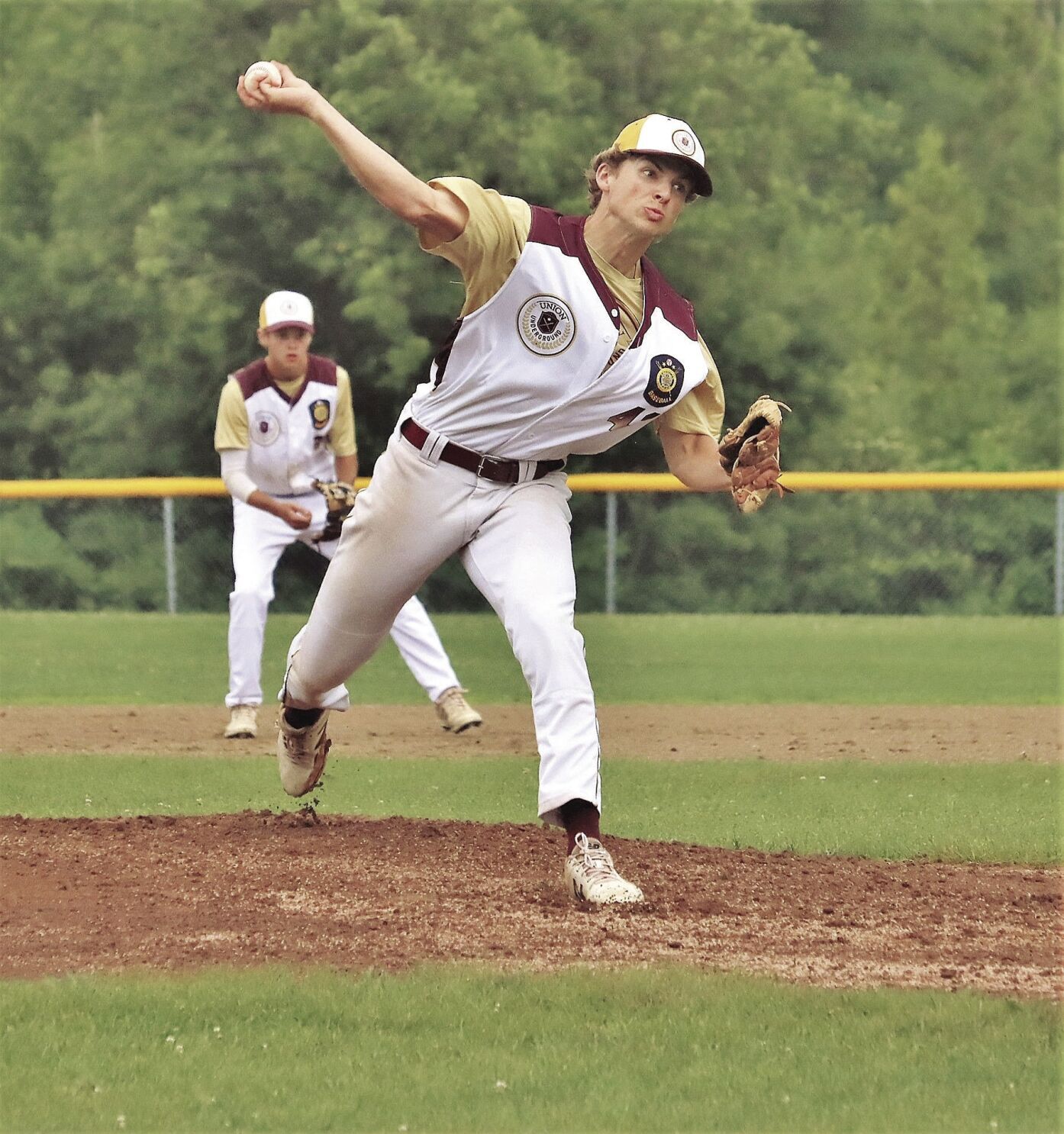 MANCHESTER — Joey McCoy found himself in a few unfamiliar spots on the mound on Tuesday night against Brattleboro Post 5.

Brattleboro got on base all afternoon, but McCoy did a fantastic job of pitching himself out of trouble in a handful of situations in Manchester’s 6-5 win.

The most threatening was the top of the fifth, with a one-run lead McCoy hit two batters and walked another to load the bases with no outs. With Post 5’s clean up hitter, Turner Clews, stepping up to the plate the visitors looked primed to regain the lead.

McCoy settled in and did what he does best according to his coach Eddie Lewicki.

“Brattleboro is really, really good. They’re gonna always get runners on, but I think Joe did a really good job of just pounding the strike zone with all of his pitches and our defense did a fantastic job today in those tough situations where we really needed that play. It was huge.”

McCoy caught Clews looking at a called third strike, and followed that up by inducing two ground balls to third base and getting out of the inning unscathed.

One of Manchester’s significant defensive plays came from McCoy himself. After walking Zinabu McNeice to begin the third inning, McNeice stole second and advanced to third on a throwing error. A hard hit ground ball came McCoy’s way, and the pitcher was able to deflect the ball with his glove. McNeice found himself stuck in no man’s land halfway down the third base line as McCoy gathered the ball and focused his attention on the scoring threat. McCoy charged toward McNeice, forcing him to make a quick decision to return to third or try and score. He tried the latter, but was unsuccessful as McCoy ran him down and flipped it to his brother Jack at third who applied the tag and eliminated the scoring threat.

Nate Smilko also made a fantastic play on a grounder to short in the sixth inning, diving for a ball that looked destined to make its way into center field. Smilko then quickly gathered himself and threw a dart to his first baseman, with the ball beating the runner to the bag by a half-step.

The Brattleboro bats jumped on McCoy in the first, as McNeice sliced the first pitch of the ball game to right field for a stand up double. Aidon Davis followed that up with a single, scoring his teammate. Jack Pattison would eventually come around to score later in the inning after stealing third and taking home on a throwing error by Manchester’s Will Addington.

Trailing 2-0 in the bottom of the third, Manchester was able to get to Brattleboro’s Alex Bingham the second time through the lineup.

Coleman Reece set the tone with a leadoff single, which started a string of four consecutive hits and six consecutive batters reaching base.

Addington laced a hard hit ball to centerfield, allowing the first Manchester run of the day to score. The ball got past Brattleboro’s center fielder, allowing an additional run to score and giving Addington two additional bases. Addington slipped as he rounded second, and immediately grabbed his leg and limped to third base. Addington eventually walked off the field under his own power, but did not return to the game with an apparent knee injury.

In total, Manchester plated all six of its runs in the third, as 12 batters came up to the plate in the frame. By the end of the third, the home team held a 6-2 advantage.

“That inning we made a couple of good swings and got lucky with a ball getting by an outfielder and stuff, but all the way through those guys had really good at bats,” Lewicki said.

Despite the rough third inning, Bingham pitched a great game, limiting Manchester’s chances in his five innings of work.

Jeremy Graves received the ball in relief work for the sixth inning, and kept Post 5 in it by not allowing a run in a 6-5 ballgame.

Joey McCoy came out to begin the seventh, but was only three pitches away from reaching his pitch count. He was able to strike out Pattison for the first out of the inning.

Lewicki made a mound visit with Manchester needing just two outs to secure the win. The skipper turned to Jack McCoy to close the door on Post 5, as big brother handed the ball over to little brother with the game on the line.

Lewicki laughed as he recalled the mound visit in the seventh inning.

“Joey didn’t even think that Jack was going in, I handed him the ball and he goes, ‘Are you seriously putting Jack in?’ (That’s) brotherly love, right?”

Jack McCoy, a rising sophomore for BBA, stepped up in a big way. After walking the first batter he faced, and being called for a balk to advance the tying run into scoring position, he settled in to retire the next two batters he faced and seal the victory for Manchester.

The victory brings Manchester to 2-1.