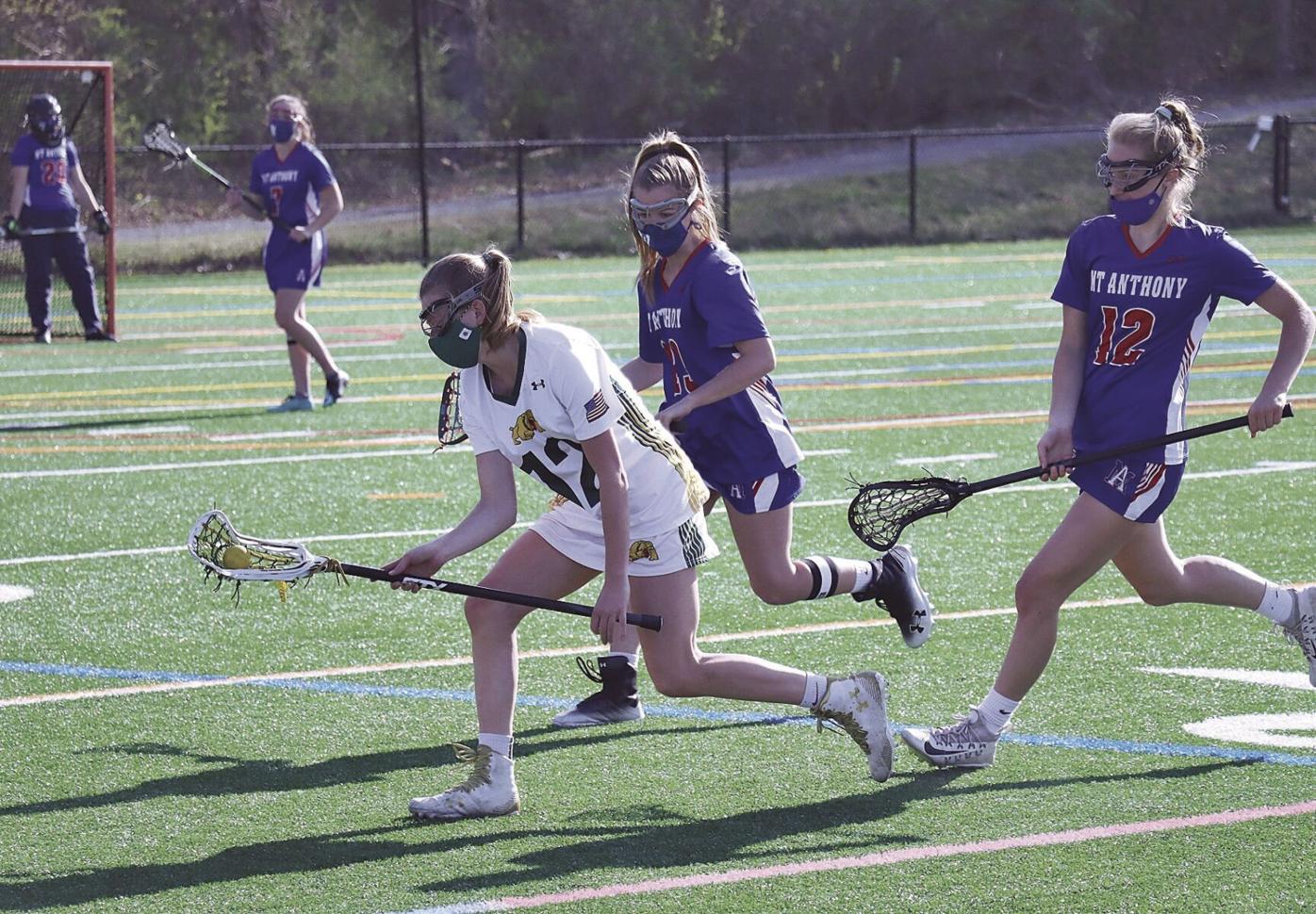 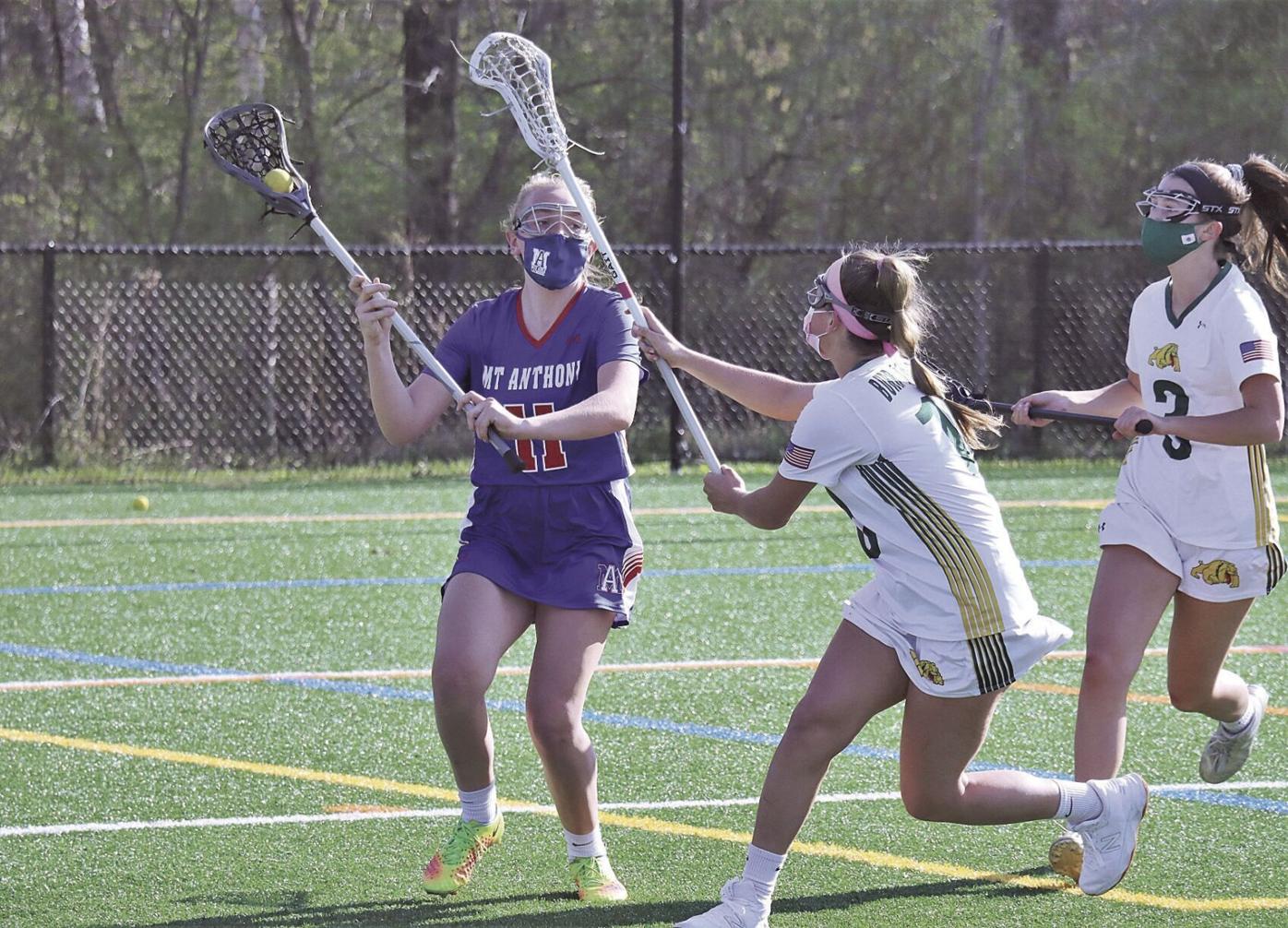 Mount Anthony’s McKenna Brighton tries to get away from a Burr and Burton double team during Tuesday’s game. 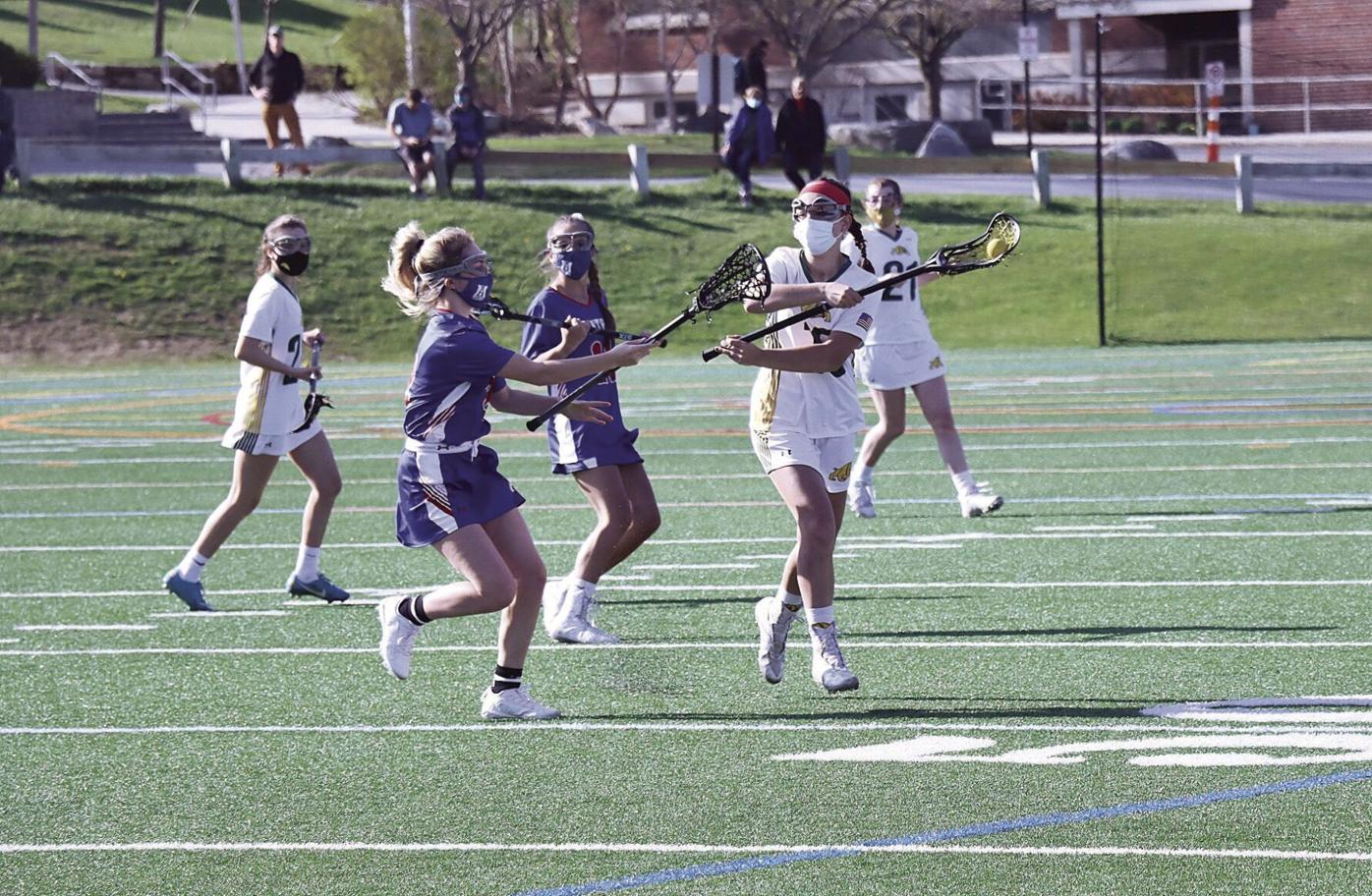 Burr and Burton's Delana Underwood looks for a teammate during Tuesday afternoon's game against Mount Anthony.

Mount Anthony’s McKenna Brighton tries to get away from a Burr and Burton double team during Tuesday’s game.

Burr and Burton's Delana Underwood looks for a teammate during Tuesday afternoon's game against Mount Anthony.

MANCHESTER — The Burr and Burton girls lacrosse team has started the season 4-0, its only real close game a one-goal nailbiter against CVU.

The Bulldogs continued its torrid early-season run on Tuesday afternoon, topping MAU 20-4 on the turf at Taylor Field.

BBA took a 4-3 lead with about 12 minutes left in the first half. MAU kept the game close for the first 15 minutes on a pair of goals by Alexis Harrington and one from Elyse Altland.

But then the Bulldog defense stiffened and they scored the last seven goals of the half.

Paige Samuelson had a pair, as did Tatum Sands and Annabelle Gray to make it 11-3 at the break.

The last goal of the half was especially frustrating for the Patriots. With only a handful of seconds left, a ground ball ended up out of bounds on the Bulldogs’ side of the field. The clock went off to signify the end of the half, but the referee added five seconds back on. It only took BBA that amount of time to get the ball into Gray, who scored her third goal of the half at the buzzer.

“It’s tough to sustain our [momentum at the] beginning,” said Mount Anthony coach Tracy Galle. “The potential is there, the question is how do we [sustain] it?”

The break did nothing to slow down the Bulldogs offensively. It wasn’t long before Sands added her fifth of the day and then subsequent scores from Gray (her fourth), Samuelson (her third), Ava Walsh and the second for Emma Hall extended the advantage to 16-3.

MAU finally broke the scoreless streak with a goal from Ava Elmer, but BBA added four more tallies before the game ended, including the first score of the year for Francesca Levitas.

Mount Anthony’s starting goalie, Jessica Volpi, was out against the Bulldogs, with Sophia Kipp filling the spot. Kipp did a nice job in the goal, making a handful of saves on some tough shots against BBA.

“We have an extraordinary group of girls, who are willing to do whatever we need them to do,” Galle said. “I needed a goalie and Sophia said she would do it.”

Galle said that despite the tough start at 1-3, the schedule has been a tough one, with games against the Bulldogs, the 2019 Division I runner-up, CVU and Rutland to start the year.

“And we have Middlebury on Saturday, so it’s insult to injury,” Galle said. “I told the kids [Tuesday] to take the game out of it and do something new and exciting and feel great for a moment. They had some great moments. I’m very impressed with this team, they don’t get down.”

BBA will try to keep its perfect record intact on Saturday afternoon when they host 2019 Division I champions South Burlington at Taylor Field at 1 p.m.