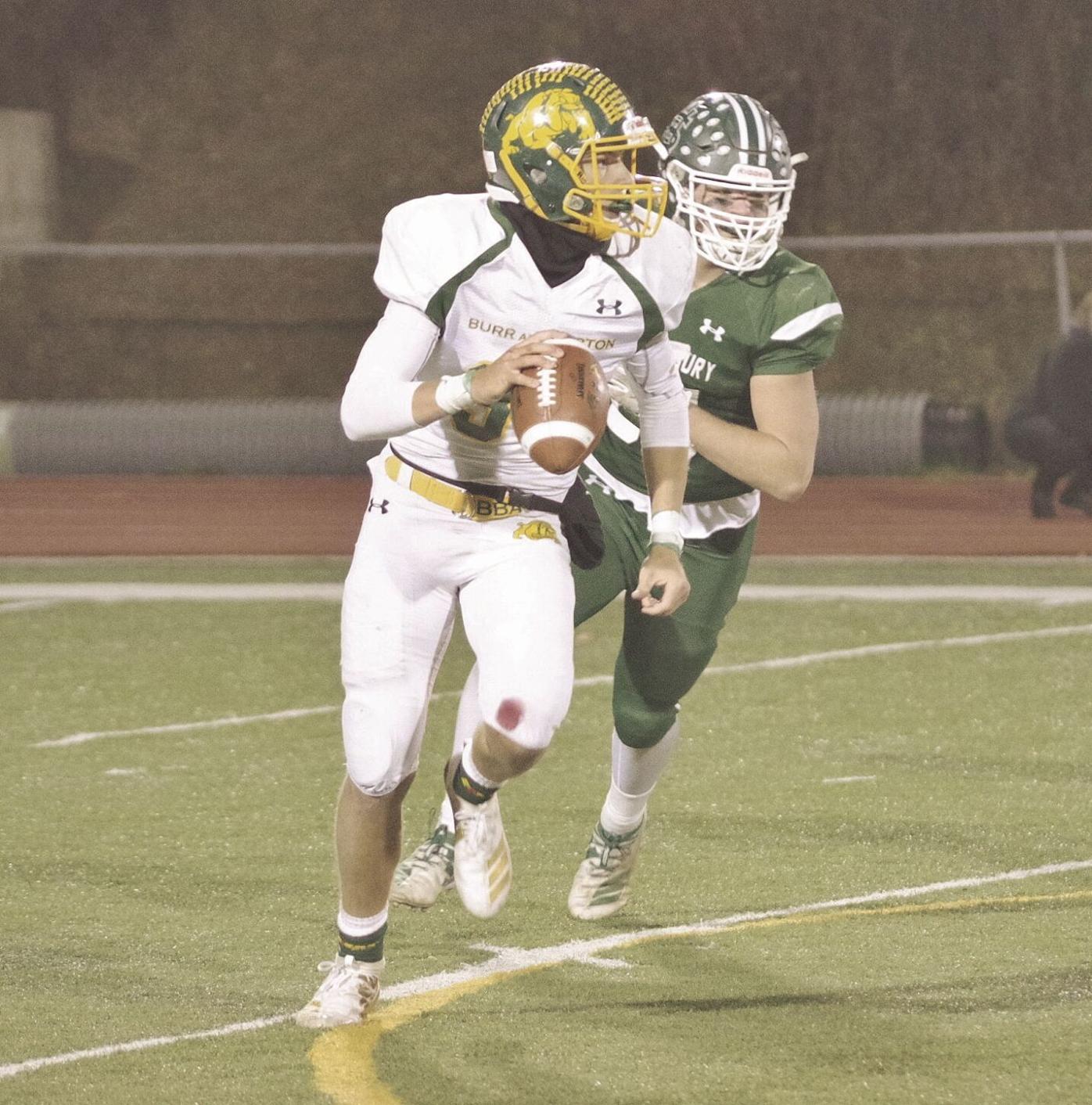 Burr and Burton’s Joey McCoy runs out of the pocket during the 2019 Division I championship game against St. Johnsbury. 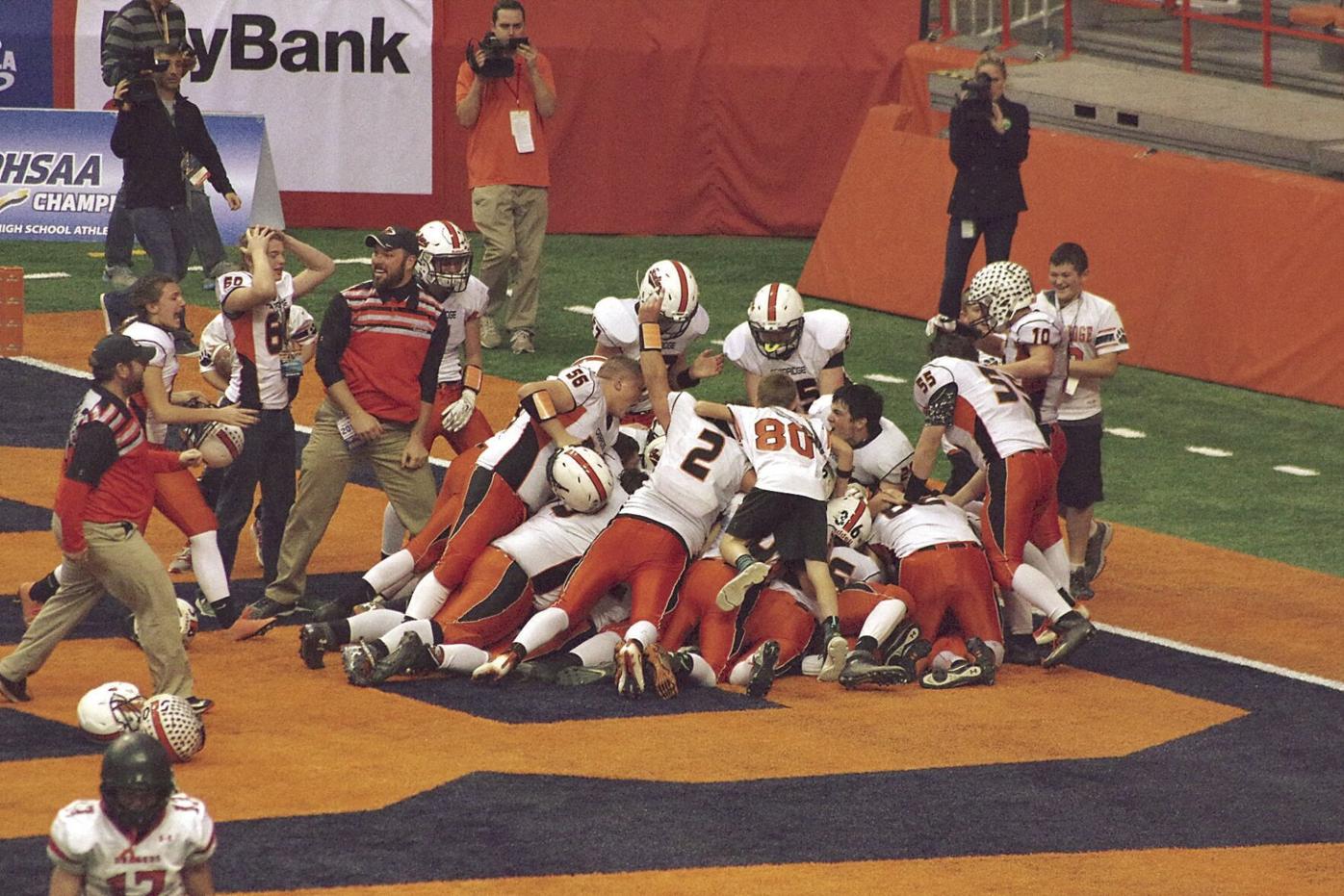 The Cambridge football team celebrates after Shawn Lemieux caught a two-point conversion to beat Maple Grove, 22-21, in overtime, in the 2016 New York state championship game at the Carrier Dome at Syracuse University. 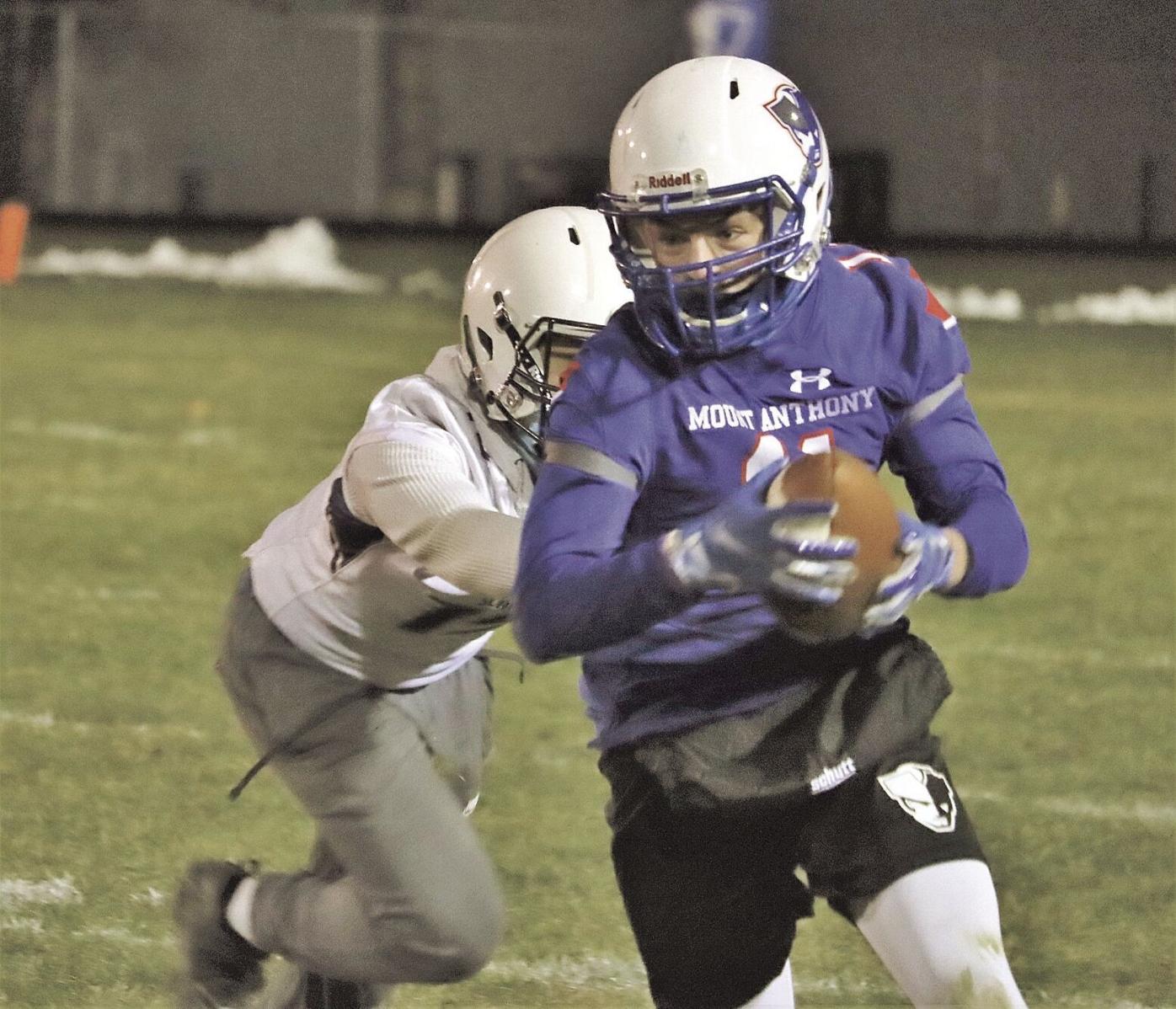 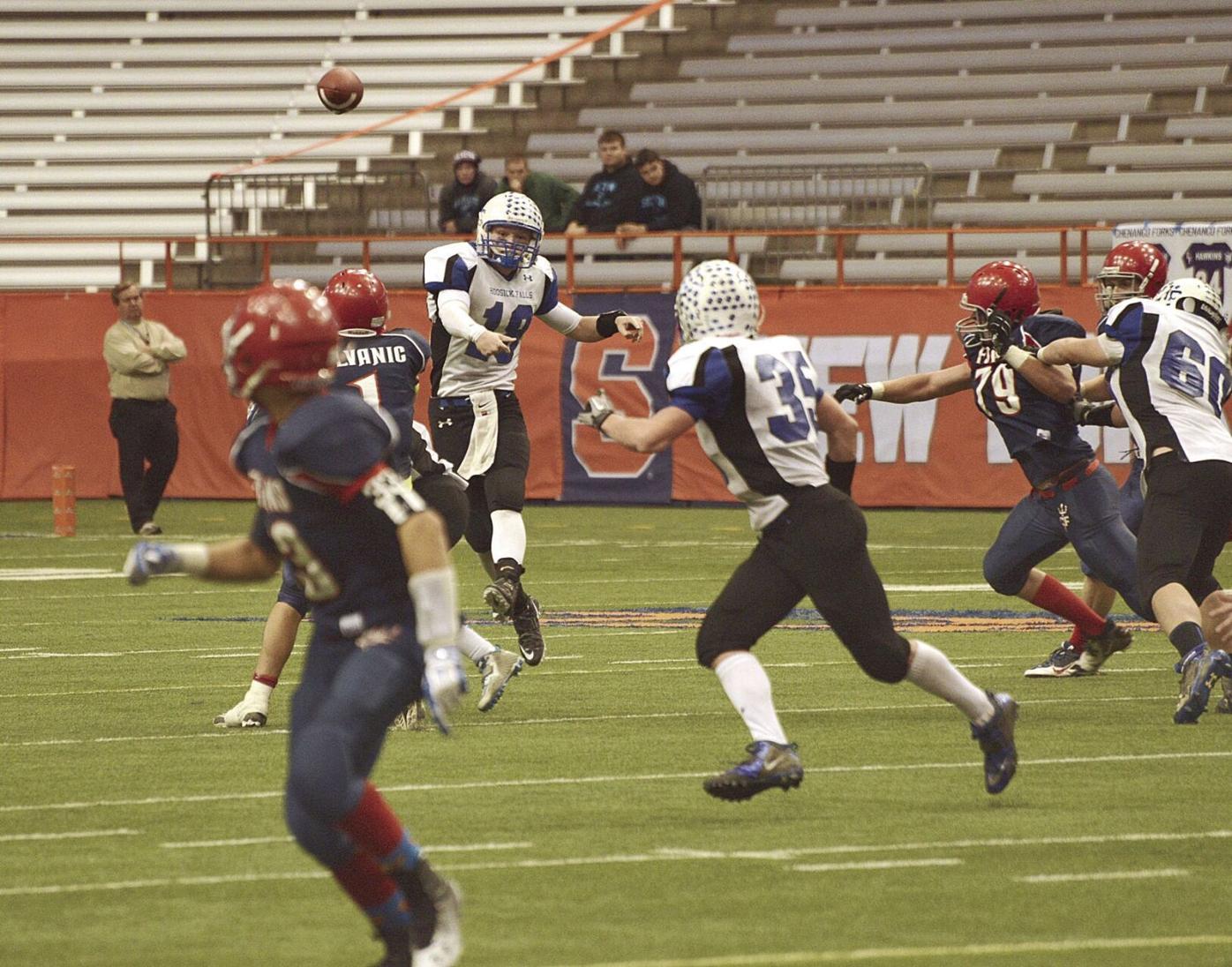 Burr and Burton’s Joey McCoy runs out of the pocket during the 2019 Division I championship game against St. Johnsbury.

The Cambridge football team celebrates after Shawn Lemieux caught a two-point conversion to beat Maple Grove, 22-21, in overtime, in the 2016 New York state championship game at the Carrier Dome at Syracuse University.

There have been a lot of terrific football played in our area in the decade of the 2010s, between championship appearances, last-second heroics and wild finishes. Here we go through just a handful. If you have any others that we haven’t put here, email me at asamrov@benningtonbanner.com. In no specific order, on to the list!

Mount Anthony wins 63-62 over Fair Haven in 3OT (2020)In the 7-on-7 format of football in Vermont in 2020, offense was at a premium and in no game was that more of the case than in the Rutland regional semifinal game between Mount Anthony and Fair Haven at Spinelli Field.

In a game that featured 125 combined points and went three overtimes, it took a defensive stop from the Patriots to score a 63-62 win over the Slaters.

On the final play, Fair Haven quarterback Sawyer Ramey rolled right, stopped, scanned the field and fired a missile into the end zone. A couple Patriot defenders were in coverage and knocked the ball away to send the MAU sideline into celebration. And on a night where MAU allowed 62 points, the Patriots defense stood tough on the final play of the game.

“We needed to make one play, make the play and the game’s over,” MAU coach Chad Gordon said. “And they made the play.”

Regulation ended at 42-42, but more points were on the horizon.

MAU jumped out to an early lead, Fair Haven came back to tie it in the second quarter, but MAU led 28-14 at the break.

Fair Haven came back again to tie the game in the third, and the teams traded scores for the rest of regulation.

The game sent MAU to the regional final, its first appearance in a championship game since 1994, where they fell to Rutland.

Cambridge wins state title with two-pointer in OT (2016), repeat as champs in 2017In 2016, the Cambridge football team reached the Class D championship undefeated, looking for its first title since 1999. Facing Maple Grove from Section VI in a contest that was tight all the way, it took one of the guttiest calls ever to send the Indians to a 22-21 double overtime win for the championship.

The game went to overtime tied at 14-14. Nick Fabrizio put Maple Grove ahead with a two-yard touchdown run in overtime, but then it was Cambridge’s turn. After the Indians converted on a fourth and 10, Maurice Seymour scored from eight yards away to make it 21-20.

It didn’t take long-time Cambridge coach Doug Luke a lot of time to make his choice — he was going for the two-point conversion and the win.

Quarterback Zack Rowland hit Shawn Lemieux with a short pass into the end zone for the winning score and sent the Indians back to Washington County with its first title in 17 years.

Fast forward 12 months and the same two teams were back to battle on the Syracuse University turf. But the outcome was the same as Cambridge took an early lead and then scored on a long touchdown drive to win 26-14 and secure the school’s third state championship in school history.

Despite its success for much of the past half-decade, Burr and Burton had a heck of a task coming into the 2019 season. Losing a coach with two state championships in Jason Thomas, who took a job in Virginia, and moving up to Division I, the largest division in Vermont sports, people weren’t sure what was going to happen for the Bulldogs.

But with first-year head coach Tom McCoy — and his son Joey running the offense — they managed to reach the title game, where they faced a St. Johnsbury Academy team that had beaten them during the regular season when senior David Hutchison rushed for six touchdowns in a game at Applejack Stadium the month before.

But at Rutland’s Alumni Field in the state championship game on a cold November night, BBA avenged the loss, scoring a 47-20 victory and claiming the Bulldogs’ first ever Division I title after a 10-1 campaign.

“I’m really proud of the kids. They worked hard all season long,” said first-year BBA coach Tom McCoy after the game. “It was a tough road. We had to play Hartford twice, we had to play undefeated Middlebury on their field and then you have to play a team that already beat you once for the state championship. [The team] believed in each other.”

BBA started the game fast on offense, with McCoy connecting with Logan Morgan for an 86-yard touchdown on BBA’s first offensive snap to set the tone.

Later on, McCoy found John Morgantini for a long touchdown pass to take the lead at halftime, and getting the ball first in the second half, found Jack Morrison for a touchdown.

McCoy then added a 34-yard touchdown run to his line, making it 27-7, and setting up the coronation.

Joey McCoy was dominant through the air, throwing for 517 yards and five touchdowns, while rushing for a score as well.

Morgan, a senior, added eight catches for 343 yards, a playoff game record, three touchdowns and a big interception to keep St. Johnsbury from making any comeback.

A year before making history in Division I, the Burr and Burton football team got its money’s worth in its last year in Division II in 2018.

Cruising through the regular season and then a win over Milton in the semifinal, the Bulldogs faced Fair Haven in the final and cruised to a 63-14 win over the Slaters, the biggest total points and largest margin of victory in Vermont football championship history.

Joey McCoy combined to score seven touchdowns, passing and running, and combined for more than 400 yards of offense. At one point in the third quarter, BBA led 63-0, before allowing a pair of scores in the final quarter.

Jake Baker was a top performer on the offensive side of the ball, scoring three touchdowns in the rout. And while the offense was putting up ridiculous numbers, the defense was as stout on the other side, holding all-state quarterback Cam Coloutti to 243 yards and two touchdowns, most put in the stat book after BBA led considerably.

Patrick Forstmann and John Morgantini had interceptions for BBA.

An offense that dominated all year had its work cut out for itself in the Class C state championship in 2012. The Panthers had reached the championship once before, losing in 2003. A decade later they were back, but with a behemoth in its way — Hornell, who came into the game on a 51-game win streak and having won the past three state titles.

But the Panthers, who never scored less than 34 points a game that entire season, put it to Hornell from the opening whistle, opening up a 27-7 lead at halftime on two touchdown passes by Billy Pine — one to Randy Tutunjian and the other to Josh Brogue — and two rushing touchdowns, one by Pine and the other from Brad Burns. Burns, who ended up attending Hobart College, rushed for 2,150 yards that season in Ron Jones’ read-option offense.

Hornell made a game of it in the second half, but a 59-yard touchdown run from Burns halfway through the third quarter clinched it for the Panthers. That fall was one of huge success for Hoosick Falls, as both girls and boys soccer teams made it to the Final Four, the field hockey team reached the Class C finals and the football team won its first, and still only, state championship.

Two years after its second-ever state championship appearance, Hoosick Falls returned in 2014, going undefeated until the championship game, where they faced Section IV’s Chenango Forks at the Carrier Dome.

Austin Pitt got the Panthers on the board early and the Panthers led 14-12 at the break after Hoosick quarterback Garrett Wright, who threw for 152 yards in the game, punched it in from four yards out.

In 2012, Cambridge outslugged Greenwich, 42-34, in a game remembered for the offense’s ability to run the football.

Matt Parmenter ran for four touchdowns for Cambridge, including the winning score in overtime. Greenwich had the lead in the third quarter before Parmenter’s third score of the day and in the extra frame, the Indians’ defense held firm to deliver the victory.

Cambridge had to overcome John Barnes’ 360 yards and three touchdowns, but the Indians’ runners had just enough to get past the Witches.

In 2015, the Mount Anthony football team needed a win in its regular season finale against CVU to have a chance to reach its first playoff berth since 2009 and the Patriots delivered in a big way on the road in Hinesburg.

Led by Noah Normyle’s 250 yards from scrimmage, they beat the RedHawks, 30-27, to clinch a playoff berth.

Normyle scored two touchdowns on the ground, Pat Powers added a score and Mickey Bernard added a 33-yard touchdown run to keep the Patriots ahead.

On the defensive side, Powers added a late interception, leading to a Ryan O’Neill field goal that would end up as the winning points.

In the playoffs, MAU faced No. 1 Rutland, and were knocked out in a 46-13 defeat to the Raiders.