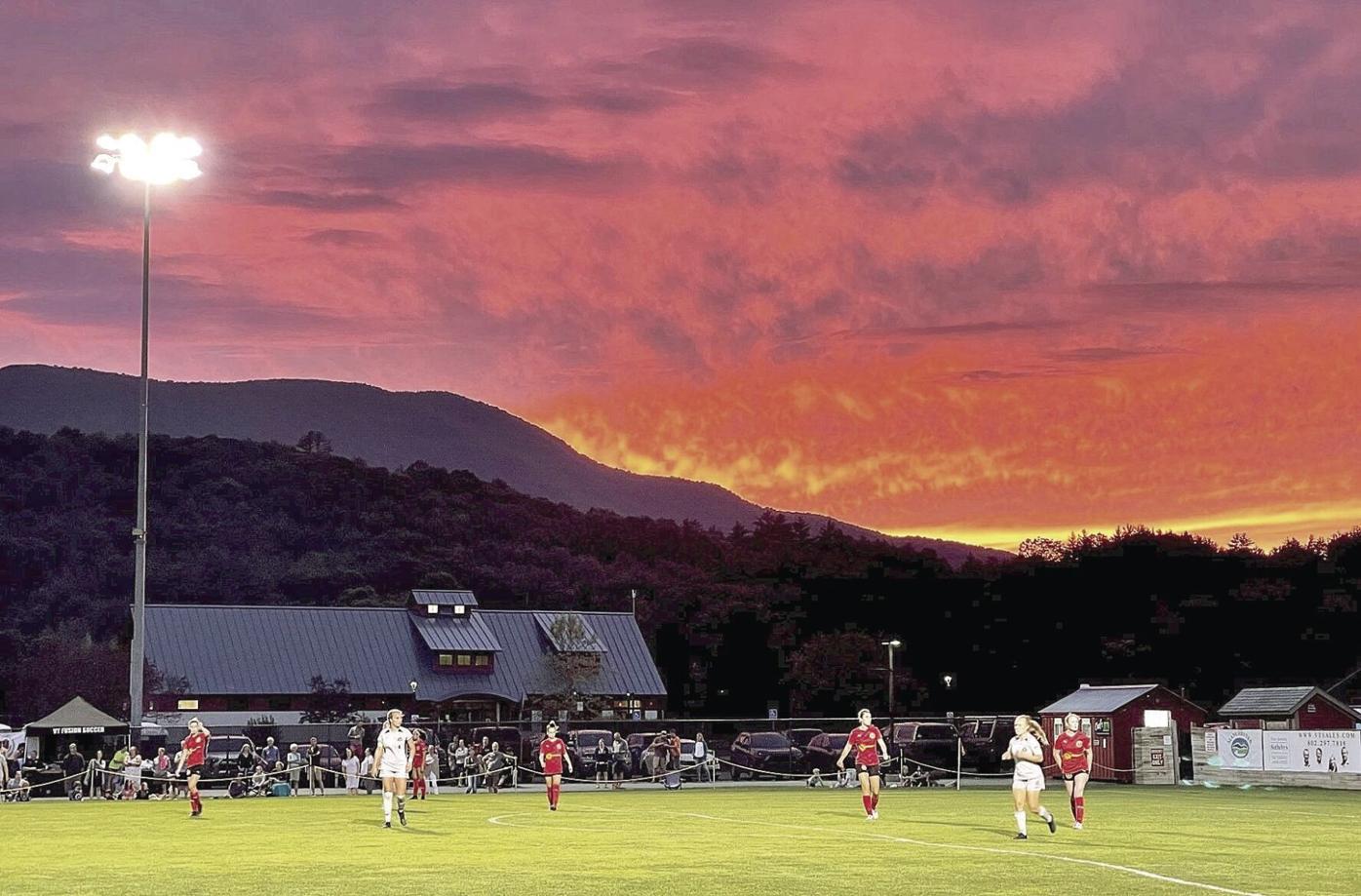 The sun sets on a summer night behind Applejack Stadium in Manchester. 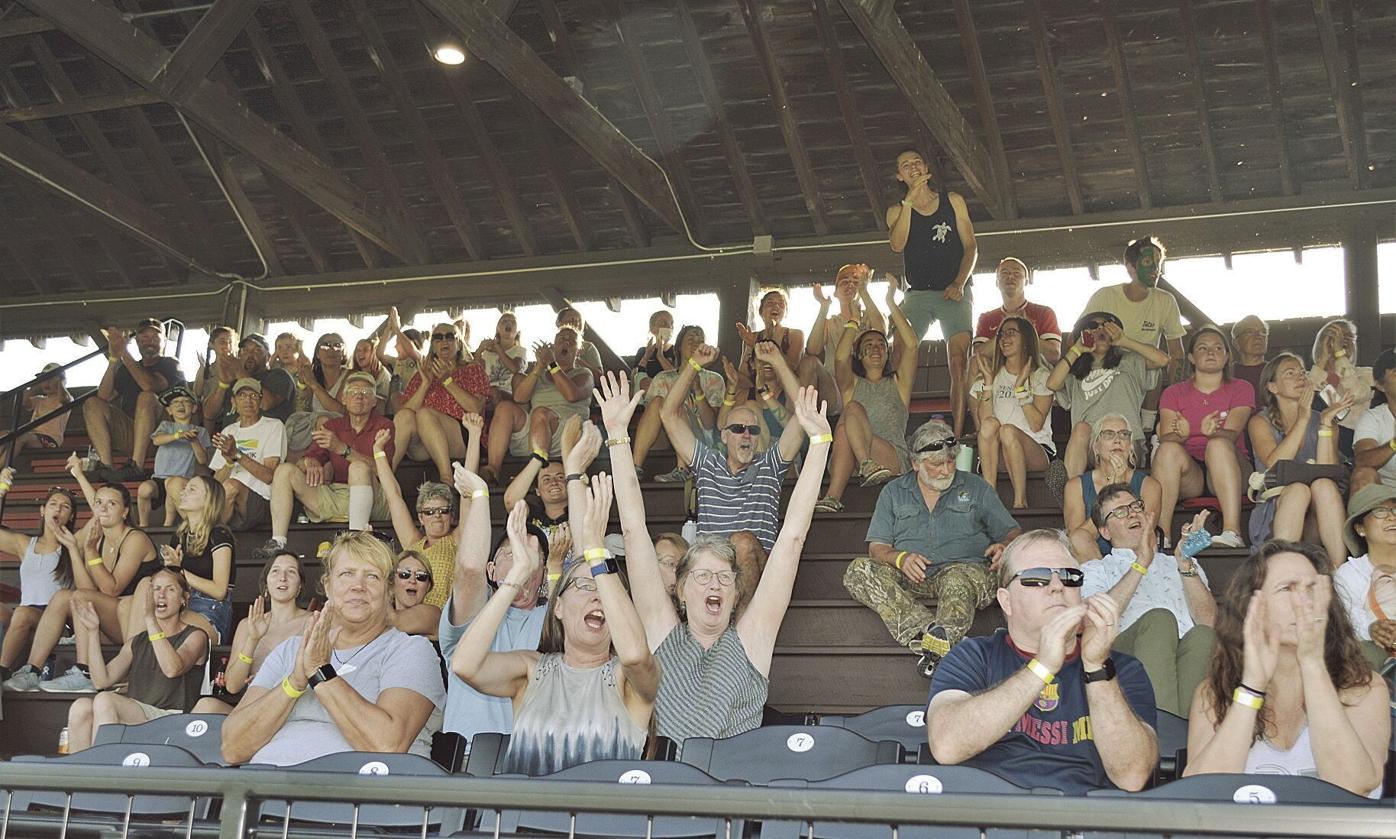 Fans at Applejack Stadium cheer from the 1887 grandstands.

The sun sets on a summer night behind Applejack Stadium in Manchester.

Fans at Applejack Stadium cheer from the 1887 grandstands.

This week, Applejack announced it will host a premier Division III women’s soccer tournament next fall. The four teams competing will be Castleton University, Williams College, MIT and Claremont-Mudd-Scripps (CMS) of Claremont, California. The tournament will take place Sept. 10-11, 2022.

Williams College and Castleton have both played games in the past. It will be MIT and CMS’s first game at the stadium.

O’Keefe says CMS ‘s willingness to travel from the other side of the country says a lot about how Manchester has become an attractive soccer destination.

“It kind of tells you how successful the initiative is, that 30 people are willing to get on a plane in Los Angeles, California and fly to Albany, New York, probably get on a bus and drive another hour to come to a tournament,” O’Keefe said.

It’s high level soccer. Williams has won three national championships since 2015. CMS barely missed the playoffs this season with an overall record of 9-4-3. Castleton also had a winning record in 2021, 9-6-4.

MIT is 19-1-1 and will host Maine Maritime Academy in the first round of the NCAA tournament on Saturday.

“I suspect this is probably going to be one of the best Division III women’s tournaments in the country,” O’Keefe said.

Applejack has been bringing its fair share of entertainment to town as of late. Most recently, the Division IV Vermont boys and girls state championship soccer games were played on the pitch on Nov. 6.

Over the last several months, Burr and Burton boys and girls soccer, football and the ultimate frisbee team have all hosted games at Applejack, as well.

Two amateur soccer teams, the Vermont Fusion of the Women’s Premier Soccer League and Black Rock Football Club of the USL League Two, called the Manchester field home over the spring and summer.

O’Keefe doesn’t plan to stop there. He hopes to turn Manchester into a training site for a team during the 2026 World Cup.

“We actually think we have a decent shot of becoming a training site,” O’Keefe said.

He believes New York or Boston are likely to become top sites for the 2026 World Cup. Training sites are much different than hosting a game.

“It’d be a single team that would be here training (and) living. You come for weeks on end,” O’Keefe said. “Stay until you’re eliminated, you don’t show up two days before the game.”

World Cup games consist of countries competing against each other, meaning the team Manchester would host could be from anywhere around the world.

The international flavor doesn’t stop there.

Manchester was slated to be one of three host sites for the WPSL international combine this summer before the event had to be canceled due to COVID-19.

The combine is a tryout for top WPSL players in front of European coaches in hopes of earning a professional contract overseas, bringing professional coaches from countries such as Sweden, France, England, Germany and Italy.

Although last year’s event was canceled, Manchester is in the running for becoming a permanent site for the combine. The other two cities in the running are San Diego, California and Dallas, Texas.

O’Keefe can’t help but laugh that Applejack has put Manchester on a level playing field with cities that reside within the top-10 in terms of population within the United States.

“That’s the thing that kind of makes me chuckle, is that we’ve been put into that category,” he said.

The field has hosted its fair share of local events, as well. Applejack hosted the Special Olympics this year and will become a site for Girls on the Run Vermont, a nonprofit organization that “inspires girls to be joyful, healthy and confident using a fun, experience-based curriculum which creatively integrates running” according to its website.

O’Keefe hopes to add an NCAA men’s soccer tournament in the near future to pair with the women’s tournament.