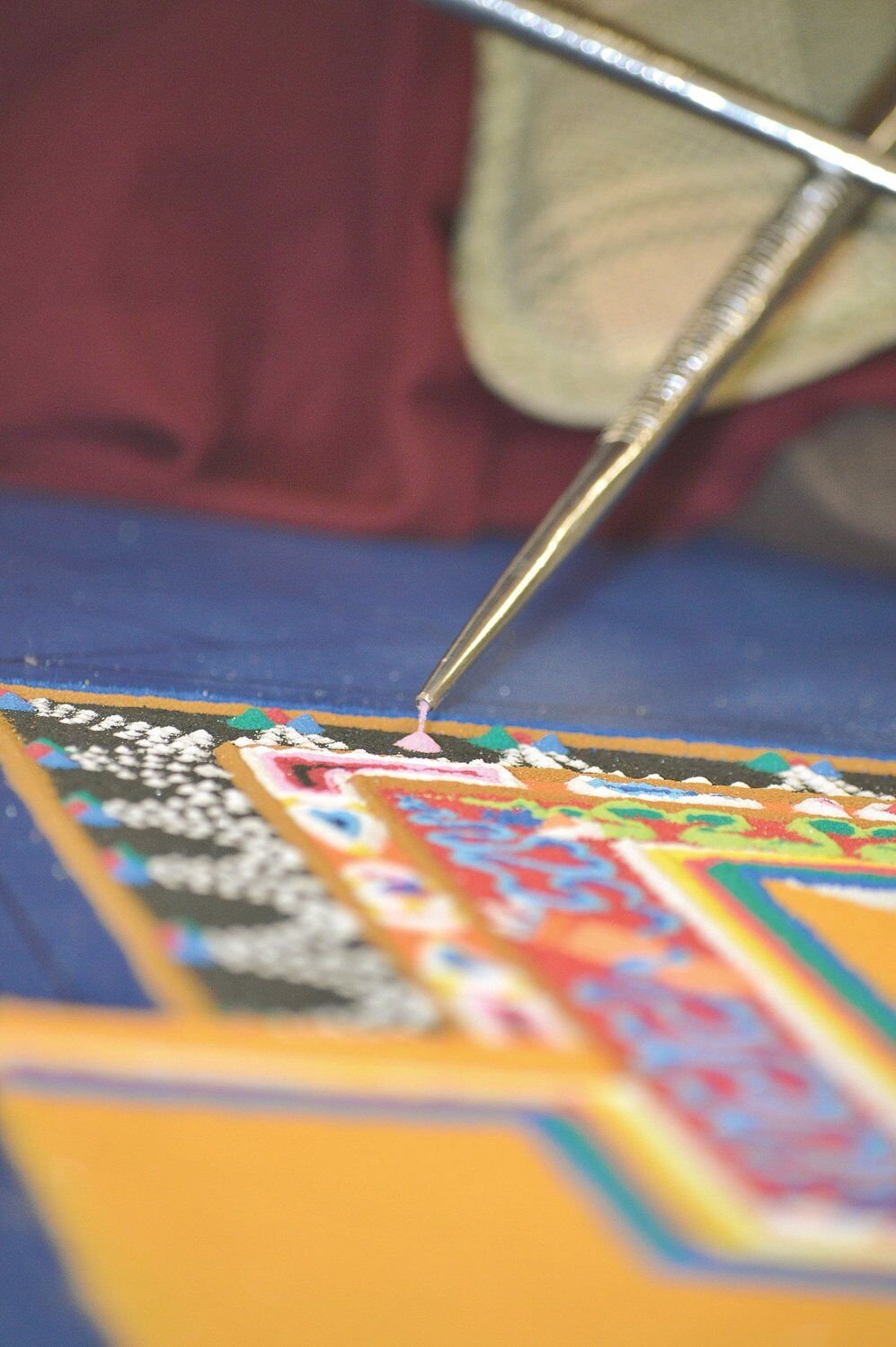 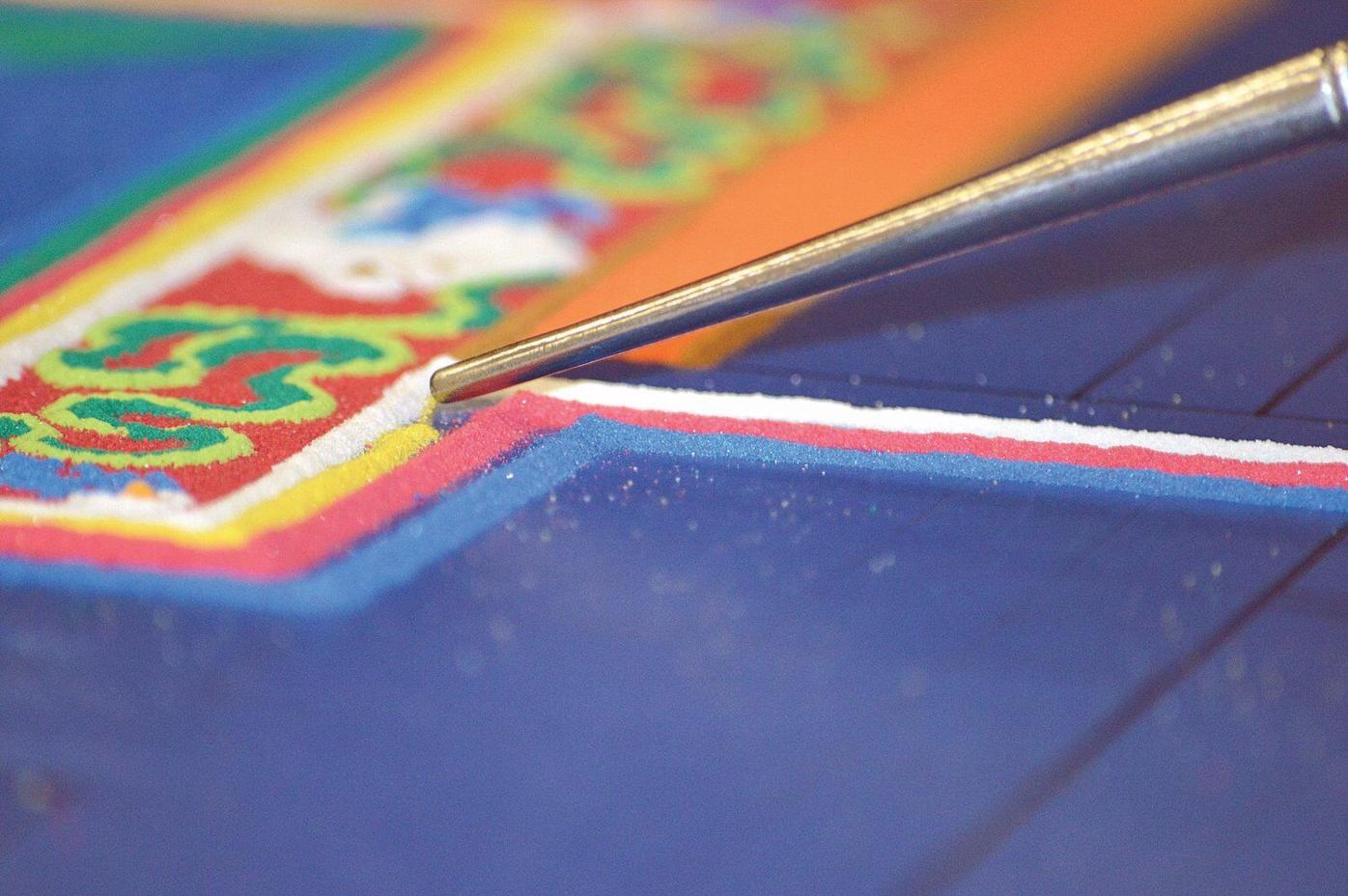 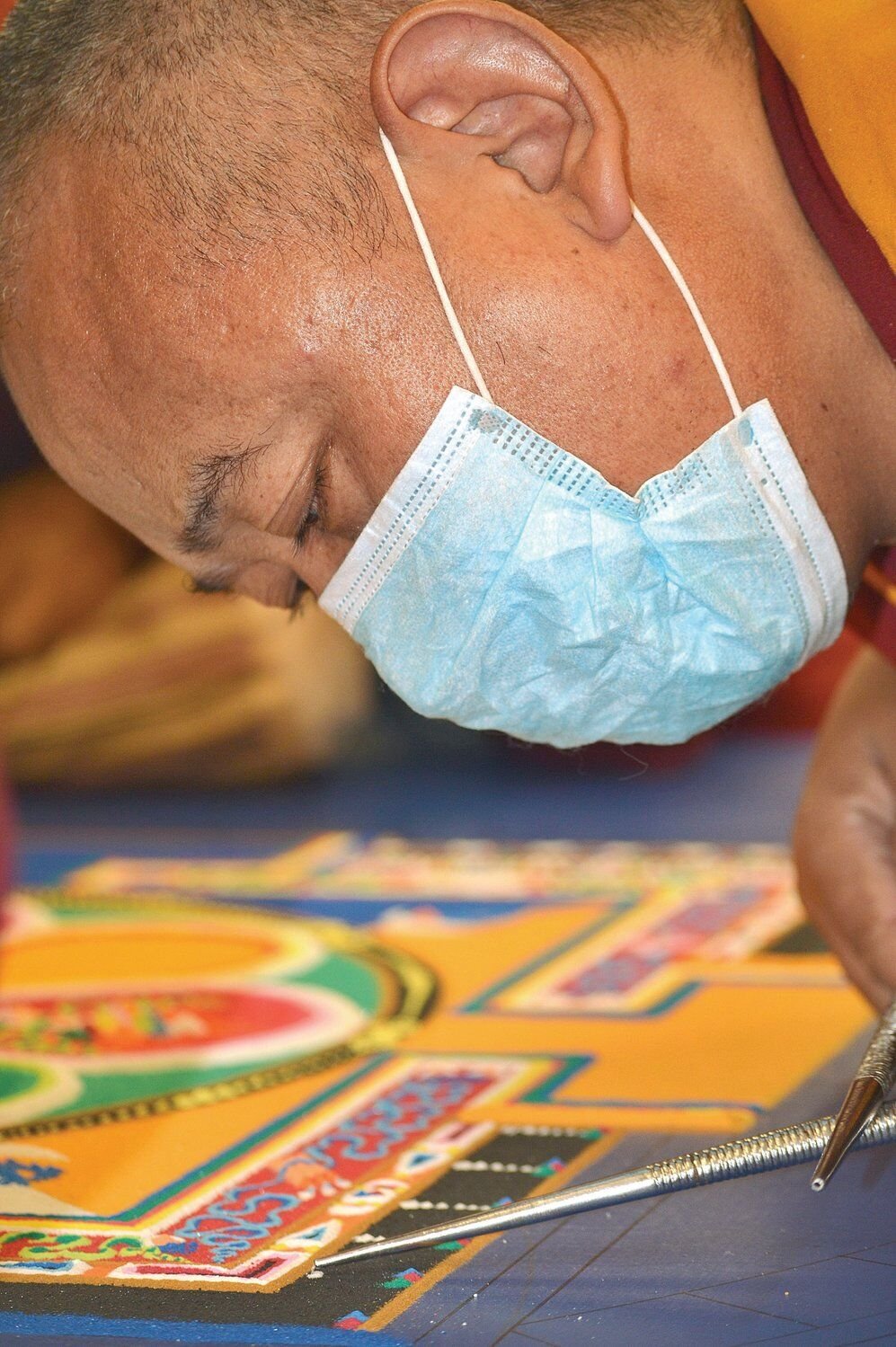 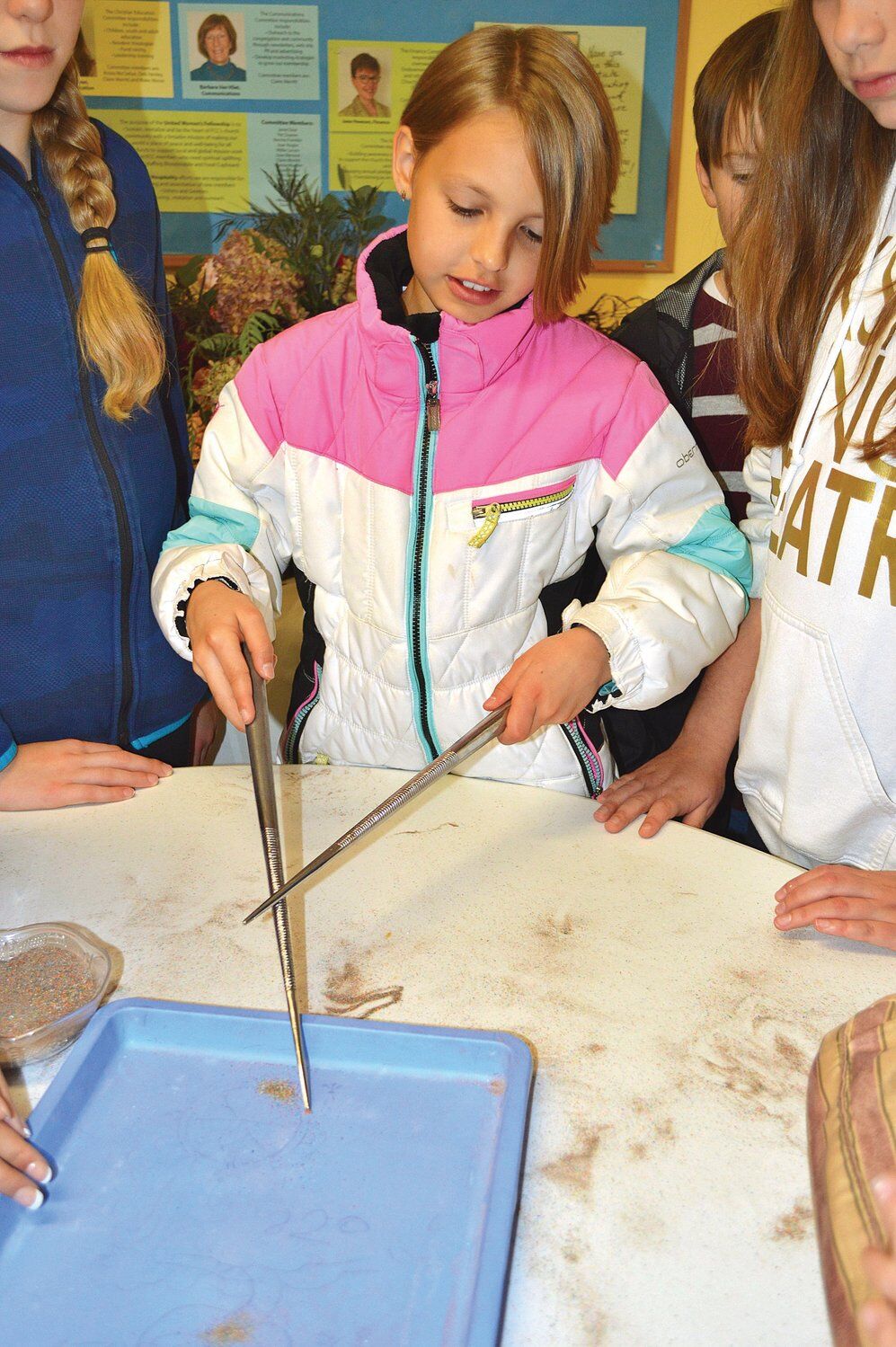 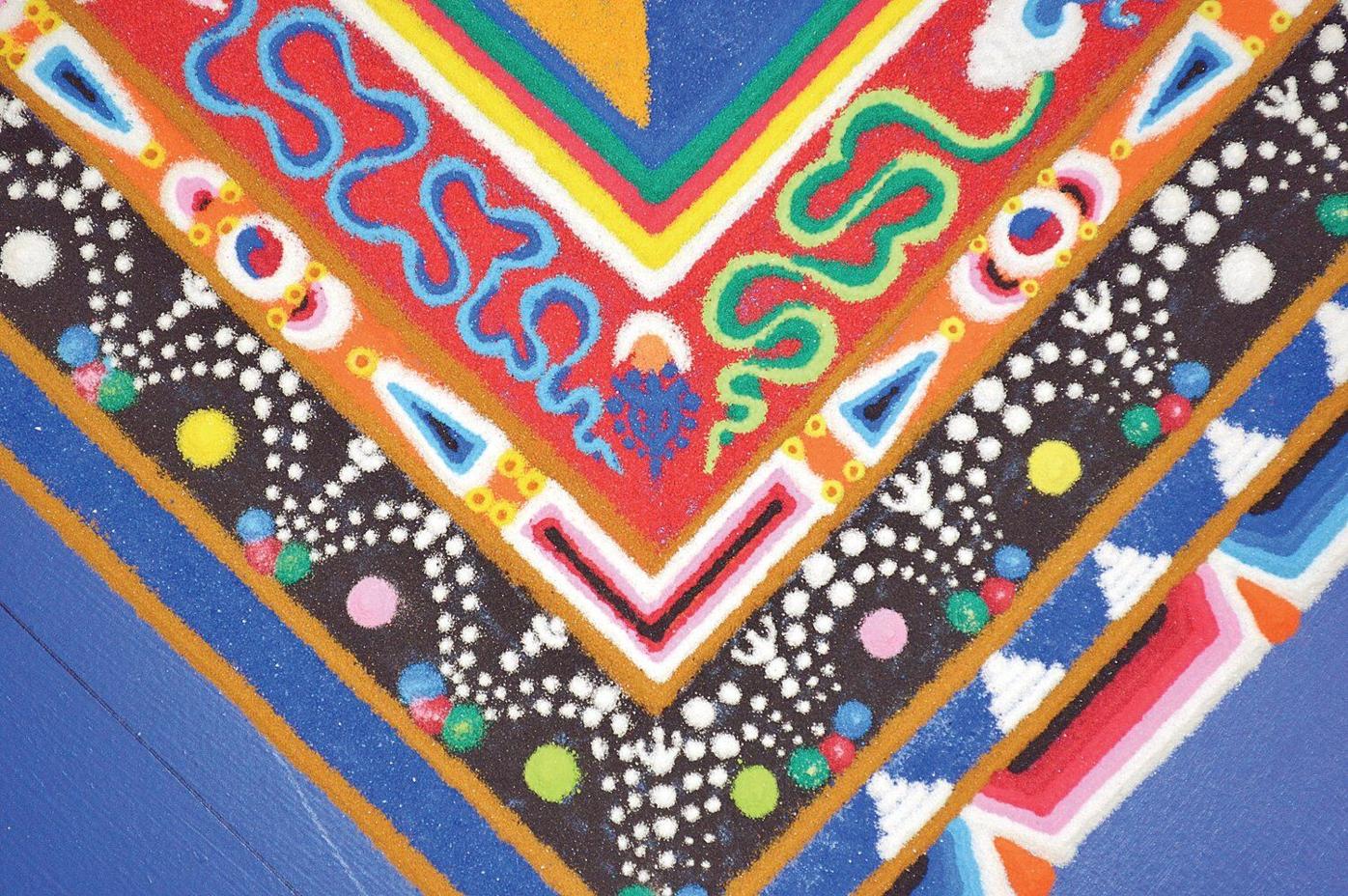 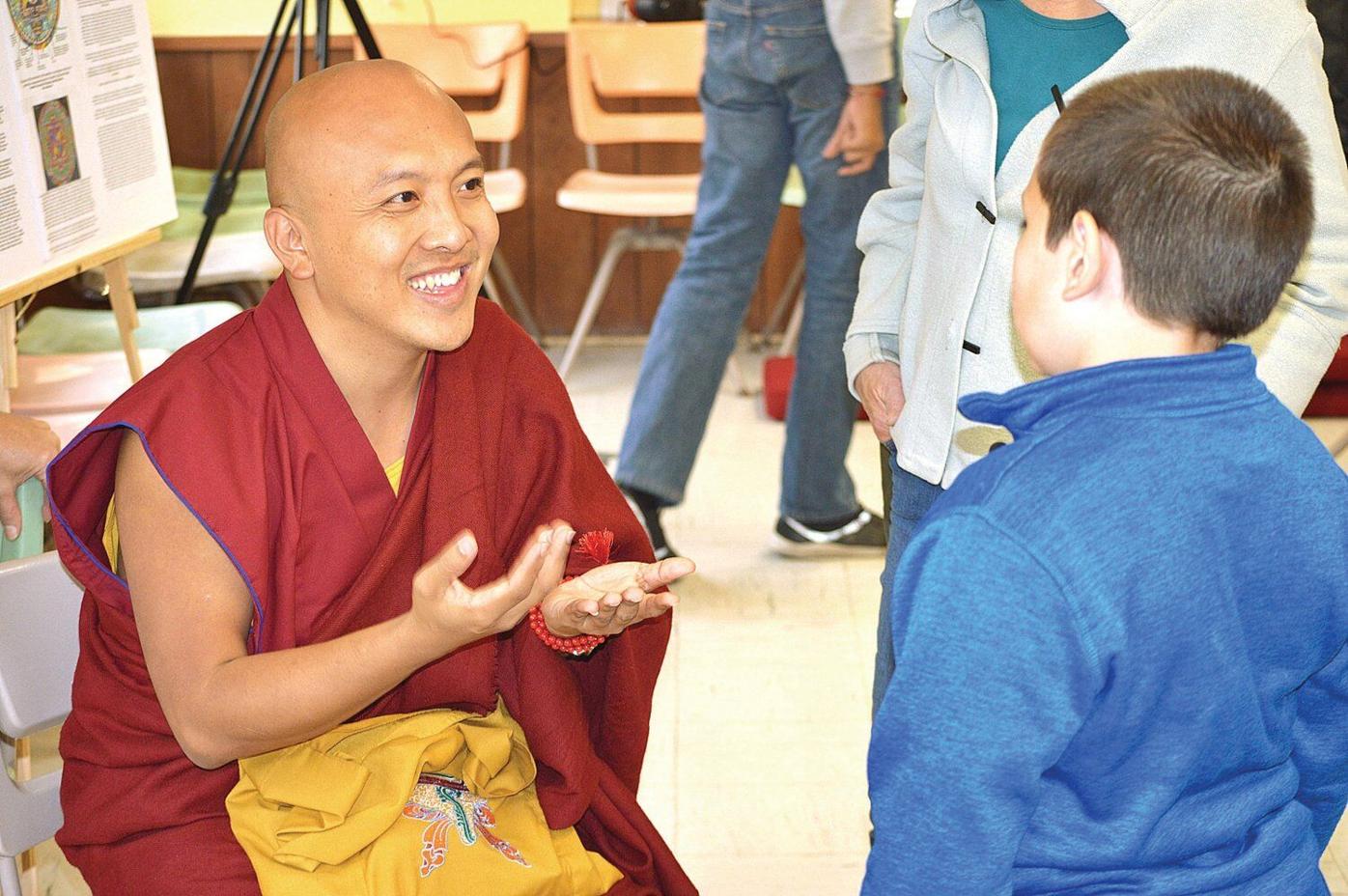 photos by DARREN MARCY - MANCHESTER JOURNALTibetan monks of the Drepung Gomang Monastery in India are constructing a mandala of compassion at the First Congregational Church in Manchester. A closing ceremony will be conducted at 9 a.m. Saturday. 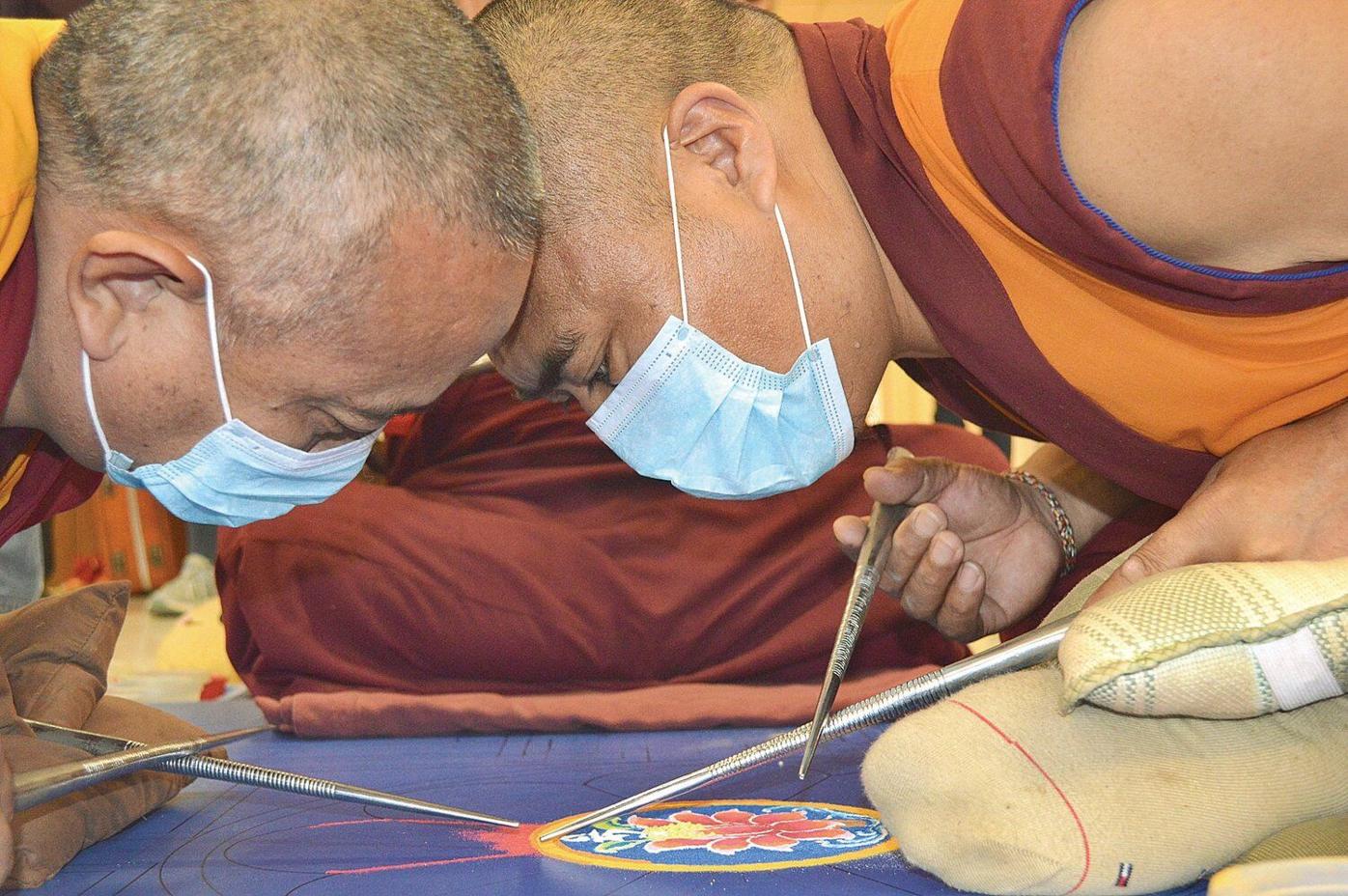 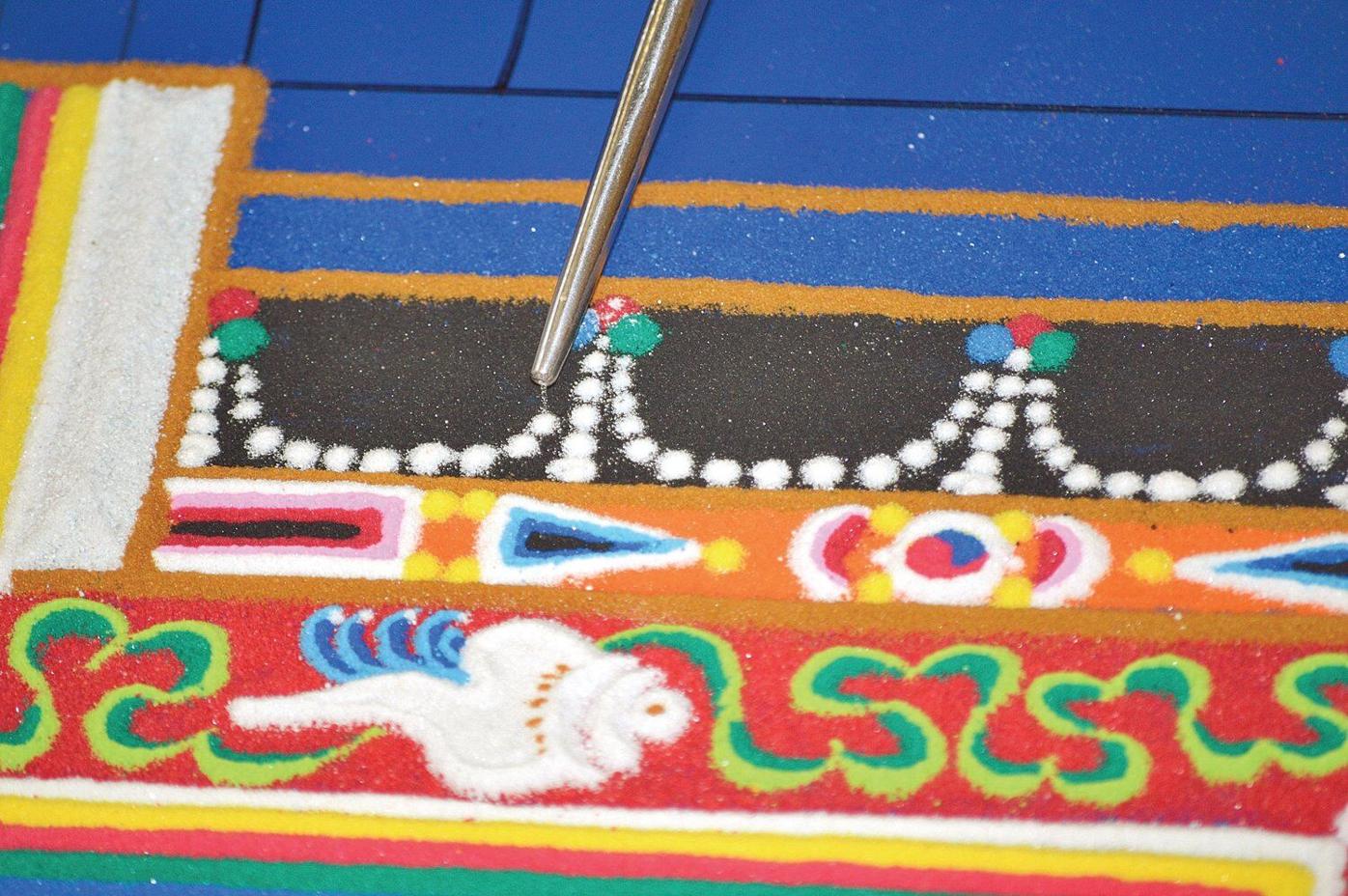 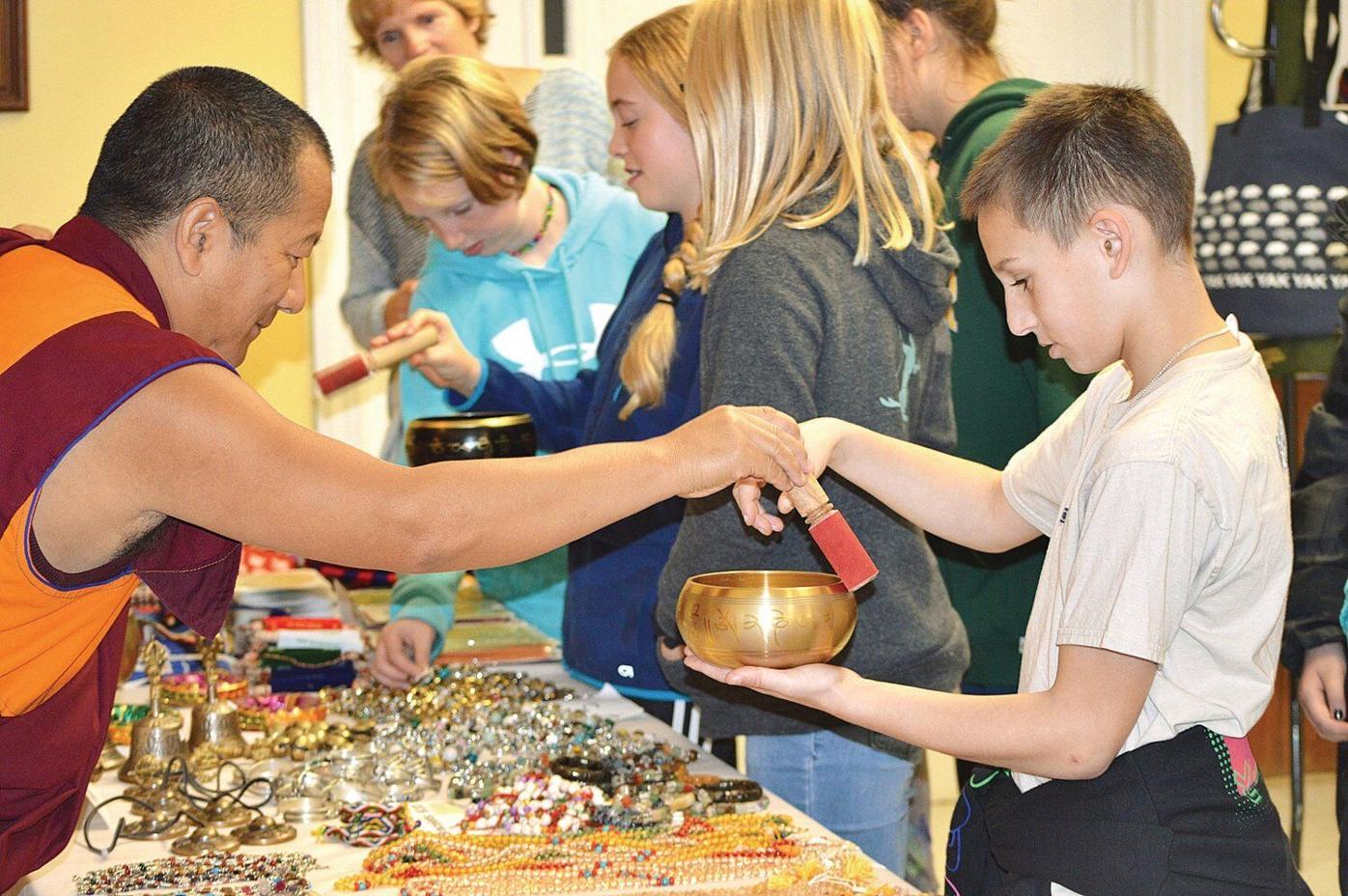 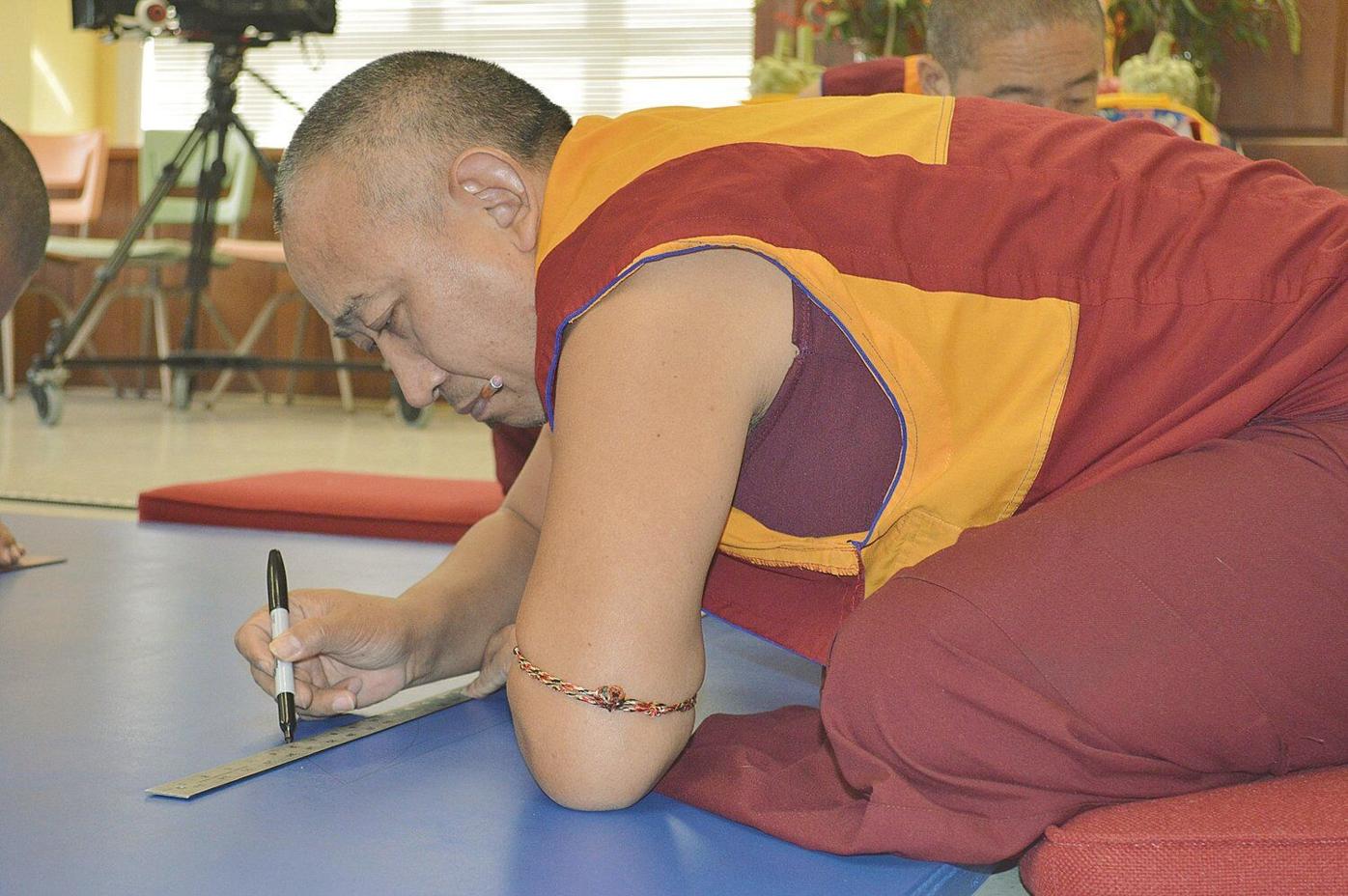 photos by DARREN MARCY - MANCHESTER JOURNALTibetan monks of the Drepung Gomang Monastery in India are constructing a mandala of compassion at the First Congregational Church in Manchester. A closing ceremony will be conducted at 9 a.m. Saturday.

MANCHESTER — Grain by grain, hour by hour, day by day over the past week, a group of traveling Tibetan monks have designed and created one of the most ornate and intricate pieces of art most people will ever lay eyes on.

On Saturday, they will destroy it.

The Tibetan monks of the Drepung Gomang Monastery in India came to Manchester on Oct. 20 for an opening ceremony and began work the next morning constructing a mandala of compassion at the First Congregational Church.

Friday, they are expected to finish the piece. After a closing ceremony at 9 a.m. Saturday, during which the work is destroyed, the monks will take it to Equinox Pond to return the sand to nature by releasing it in a flowing body of water to "symbolize the impermanence of all that exists, releasing the mandala's energies of compassion and healing into the world and blessing all elements and beings."

Brought to Manchester by Andrea Ross, the monks have spent six hours a day creating a ritualistic and symbolic sand mandala in the vestry of the First Congregational Church in Manchester.

Every bit of the mandala — the

colors, designs and layers — is placed by memory by monks having decades of dedication and study of Buddhist

The mandala of compassion is just one of many mandalas the monks create without any kind of guidance, plan or recipe.

When sand ends up where it shouldn't, or if the monk is not happy with his work, he sucks the sand back off the mandala and reconstructs it.

Using metal tools called chakpur, the up to four monks spend hours sitting on small pillows and lean in close on each side of an intricate design drawn on a large, square wooden base.

With each stroke of the tools, sand in one of several dozen colors falls out the end. The faster, more intense the movement or longer the stroke, the more sand drops out the end as the monks guide it into the perfect location.

Local people poured into the church throughout the days to sit and watch, pray, or simply snap a few photos. The crowd was steady with some people coming back over and over.

Students from area schools have been visiting the monks and watching them work and learning about the Buddhist teachings of love, kindness and compassion. They've also learned about impermanence, which is one of the harder concepts for kids or adults to grasp.

So many people are amazed to know the art will be destroyed, but during the opening ceremony Sunday evening, the leader explained to the crowd that Buddhist teachings allow that emotions like happiness and things that are beautiful are temporary and will go away.

Learning to deal with that is important as is the ability to maintain control of your emotions during difficult times.

The crowd for the opening ceremony was enormous. Several hundred chairs filled the church's vestry and more were added as the crowd continued to grow. Before long, the space was filled and people were standing around the edges of the room, seated on the floor near the monks and spilled into the hallway as the monks chanted prayers seeking permission to build the mandala.

The size of the crowd also was not lost on Pastor Gordon McClellan who was in attendance along with spiritual leaders from other religions in the community.

"To me, God is bigger than religion," McClellan said. "God's spirit of love is for all of us regardless of religion or lack of it. Religion should be more about that and less about our institutional interests. I'm so happy our church received them with open arms."

One of the women helping to bring the monks to Manchester was Barbara Morrow, a practicing Buddhist.

"It says so much about who we are," Morrow said. "We are just so fortunate to have them here."

Morrow said she has a little photo of the Daili Llama over her kitchen sink.

The monks will make an appearance at Morrow's Northshire Bookstore at 5 p.m. Thursday.

The woman behind the monk's arrival in Manchester was Andrea Ross, who has been an unofficial tour guide and educator this week for anybody who shows up.

But at the opening ceremony, it was the crowd that wowed here.

"It was everything I hoped for," Ross said. "To have so many people experience something so extraordinary in our little town."

The monks will move on to Massachusetts when they leave Manchester. They're about two months into a one-year tour.

Their costs are covered, but the monks are raising money for their monastery in India and donations are accepted and they are selling items to help raise money.