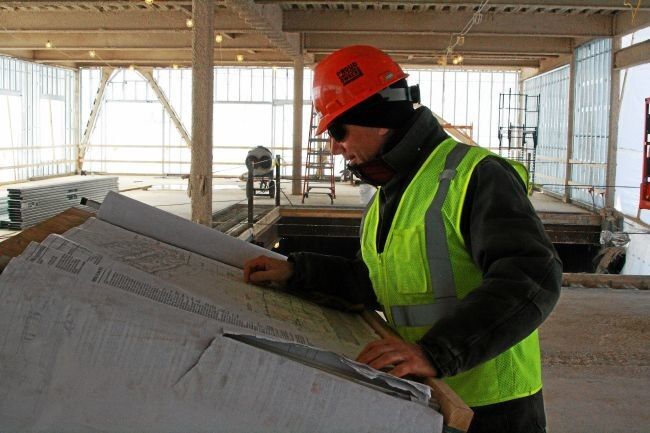 Chris Wilcox, the project supervisor for the new and under construction Taconic Hotel, studies plans and blueprints recently. The building is scheduled for a mid-September opening. 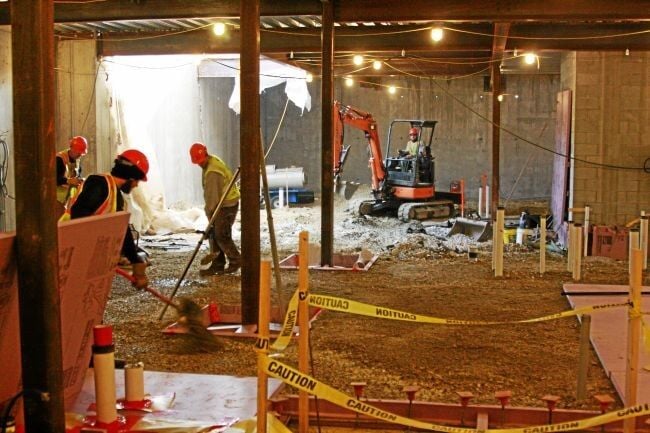 Construction workers installing the basement floor at the Taconic hotel. Despite the winter's cold, work continued at a steady pace.

Chris Wilcox, the project supervisor for the new and under construction Taconic Hotel, studies plans and blueprints recently. The building is scheduled for a mid-September opening.

Construction workers installing the basement floor at the Taconic hotel. Despite the winter's cold, work continued at a steady pace.

MANCHESTER — If you build it, they will come.

That's the hope of the owners of three new hotels which are expected to be joining the local lodging lineup, adding roughly 200 more rooms for visitors to choose from. Only one, however, is currently under construction and racing to meet a projected opening date of mid-September.

That's the Taconic Hotel, the one that will occupy the site of the former Village Country Inn in Manchester Village. The other two are a Hampton Inn that's awaiting the start of its construction and a Mediterranean-themed spa still in need of clearing a few legal challenges before it can begin construction.

Is the market there for that many new rooms? According to Clark French, one of the investors and partners in the ownership group bringing the Taconic Hotel to town, the answer is an unequivocal "yes."

Two marketing studies he and his partners commissioned indicated that Manchester had a lodging deficit of 380-420 rooms, he said, so the 87 rooms the Taconic will add when it opens later this year should fit in well under that.

"Everybody will benefit," French said during a tour of the new hotel rising out of the ground south of Shephard Lane on Main Street. "Creating a critical mass" — a reference to the other two projected hotels — "gives people more reason to go to that place ... and will bring more people to Manchester."

The hotel's experience is not meant to be limited to the guests and transient travellers who will be checking in for a visit. French is hoping the restaurant and bar on the hotel's main floor will become something of a local hangout, as well as a gathering spot for the hotel's guests, he said.

He and his wife, Lu, also one of the partners and owners in the investment group, didn't originally plan to get any further involved in the local hotel scene beyond their current stake in the nearby Reluctant Panther, another lodging property in the Village. But as time went on, that changed, he said.

As the Village Country Inn fell on hard times and began to deteriorate, deals were made but never made their way to fruition. The ownership group that plans to build the Hampton Inn a little further down Main Street on the High Ridge Plaza area weren't able to secure needed permits from the Village. George Heaton, of the Heaton Companies and a business associate they worked with on another hotel project in Vero Beach, Fla., had heard about the site being on the market and thought Manchester was an underserved market ripe for a new hotel.

"We thought there was an opportunity to do a high quality hotel that looked like it really belonged in Manchester," French said, and he and his partners came up with a revised plan from the Hampton proposal that eventually passed muster with Village officials.

The Taconic may not be for the ultra budget-conscious, AirBnB crowd. An average room rate will probably run in the $250 a night range, with some rooms going for more, and others for less. Still, it's a space in the local lodging business that awaits filling by a place like the Taconic, he said.

There will be much for guests, visitors, and the locals who want to eat and drink there to enjoy when all is said and done, he added. At the south end of the U-shaped main building will be a ballroom for events, which looks out over a courtyard and a swimming pavilion and pool. Three small cottages, facing the street, will add an additional nine rooms for guests. On the eastern wing, the one facing Main Street, will be the main lobby and reception area, along with the bar, restaurant and gift shop. There will be a "show kitchen" visible from the dining area, but that's mainly for final prep work — the main commercial kitchen will be one floor below. Across on the other side will be a full in-house laundry facility — cleaning all the bedsheets and pillow cases requires it, French said during a tour of the building as construction workers moved about and machinery roared. A covered porch will run the entire length of the building, creating a staggered effect to minimize the scale of structure and help it fit into the streetscape.

"This is a custom building," he said, noting its built mainly with concrete block and structural steel, and its components will lend it a distinctive feeling to it.

There are four stories to it, said Chris Wilcox the project manager for South Burlington-based PC Construction, the company which is building the new hotel, and will have about 60 construction workers involved all told. They worked right through the winter, and due to some of the extreme cold and snow fell about two weeks behind schedule, but are pushing hard to get caught up, he said.

"It's difficult to do this in the cold weather," he said. "The guys are cold, the production isn't as high. There are certain elements of the construction that require heat. We do that with temporary enclosures."

Laying in the concrete is one phase that does require sufficient heat until it sets, and during the coldest parts of the winter blankets were used to keep the concrete and the frost separated, he said.

After spending most of the winter focussed on the main building, workers are spreading out now, working on the two pre-existing cottage buildings and constructing the third. The entire site is water permeable, an environmentally-friendly way of drainage that won't overload the municipal system and forces water runoff back into the ground.

Every building project presents challenges, and the weather certainly was one in this case, Wilcox said. But they are moving forward, he added.

"Part of the building is structural steel and part is wood frame," he said. "The second and third floors are wood frame and that's where we're at now."

The site has also offered students from Burr and Burton Academy an opportunity to study first hand what goes into a project of this scale. Paul Molinelli, of the school's media arts department, led his class of architectural design students over for a look a few months ago, when the project was just beginning to emerge out of the ground.

The students were coming at it from more of a creative design perspective than a technical, construction one, he said, but his students were also intrigued by the complexity of the project, the thick binders of drawing and blueprints, and how much coordination went into making it all flow.

"Like many people, most of them (the students) haven't had any exposure to building something," he said. "There's a lot that goes on before the first shovel hits the ground."

Plus, they got to walk around the site and put on hard hats, which might have been their favorite part of the experience, he added with a chuckle.

By the time it is finished, the 58,000 square-foot Taconic Hotel may wind up being one of the biggest local construction projects in recent years. About $30 million will be spent by the time its doors open this autumn, between construction costs, furniture, equipment, fittings and finishing costs, making it one of the biggest by dollar volume, at any rate, Clark French said.

"People come to Vermont because they want the Vermont experience," he said, while staring out across the rooftops of the town from a third-story window that faces the western slopes of the Green Mountains. "We're not trying to be hip; we just want to be very high quality; elegant, but still a Vermont experience."