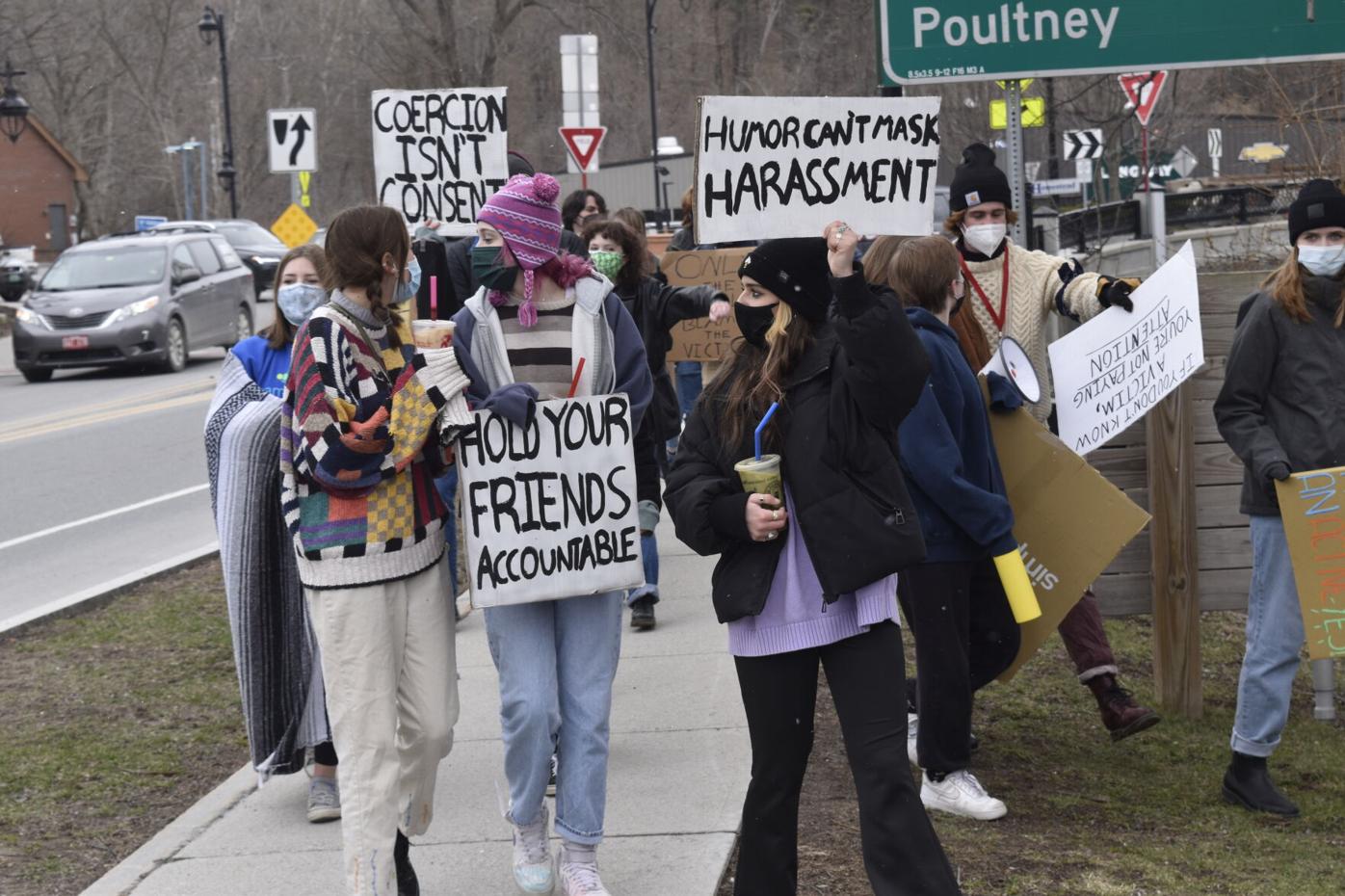 Students march from the roundabout to the town green in Manchester during a protest against rape culture April 2. 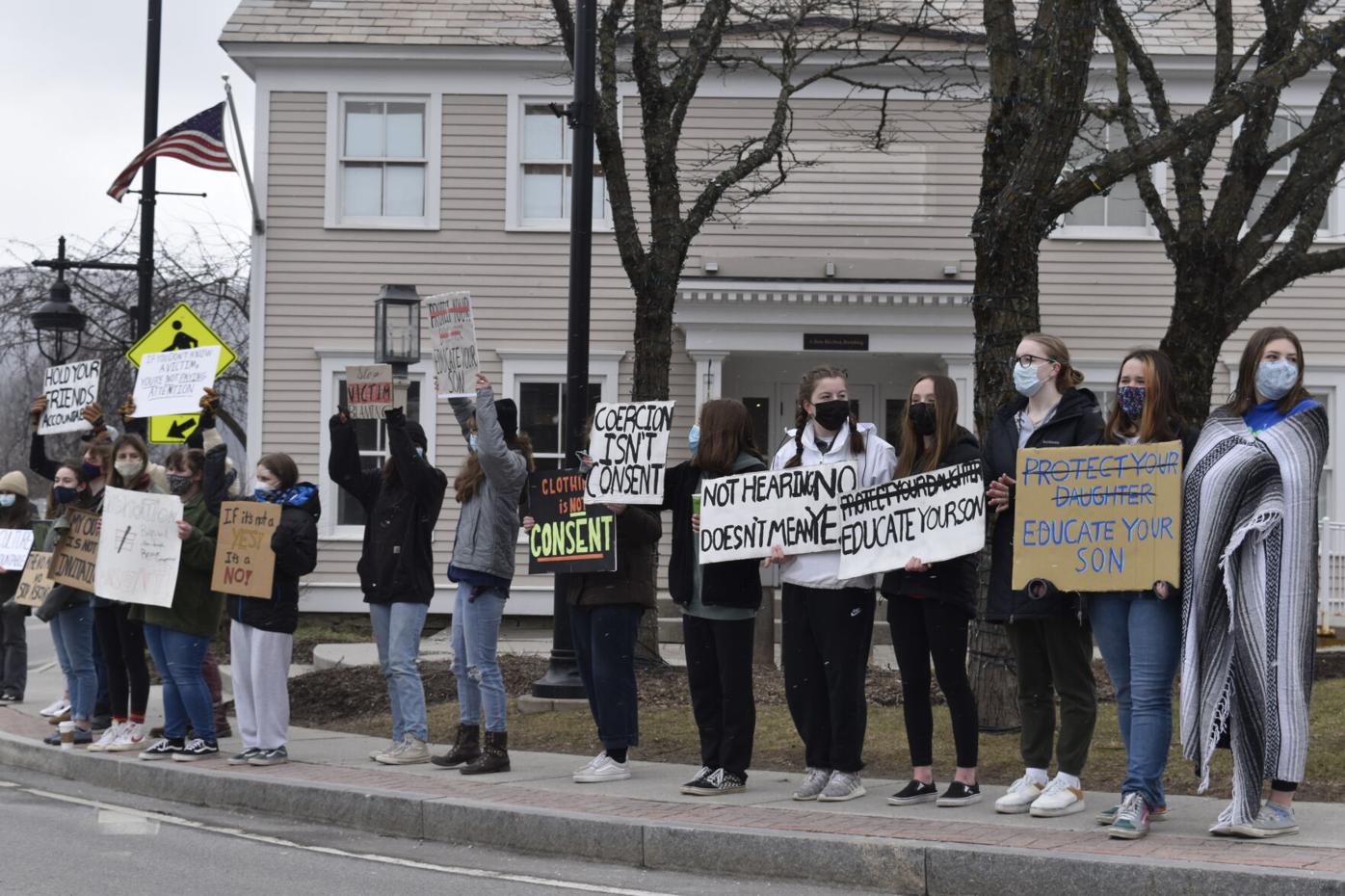 Students hold signs at the roundabout in Manchester during the protest. 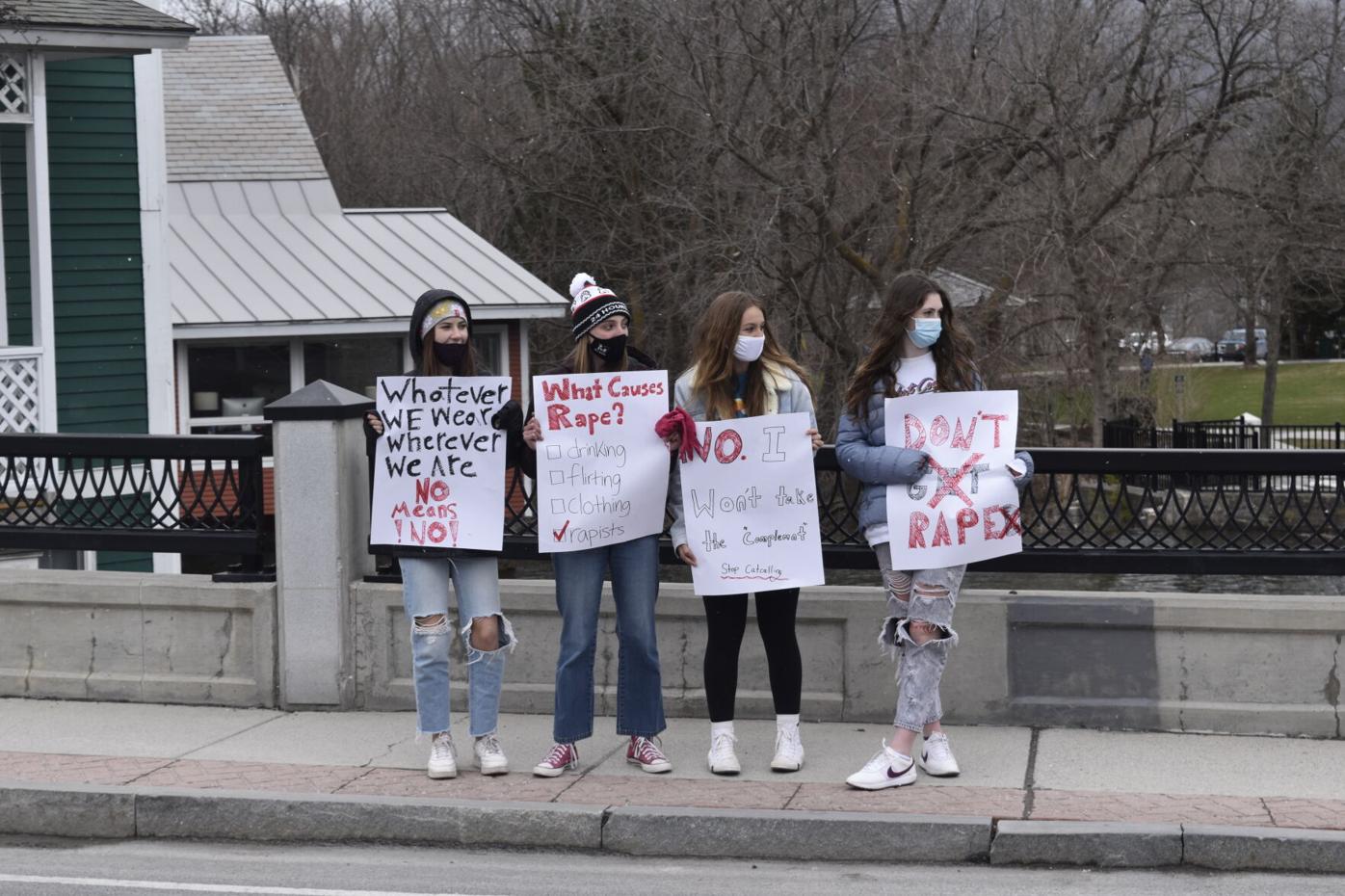 Students hold signs at the roundabout in Manchester during a protest against rape culture April 2. 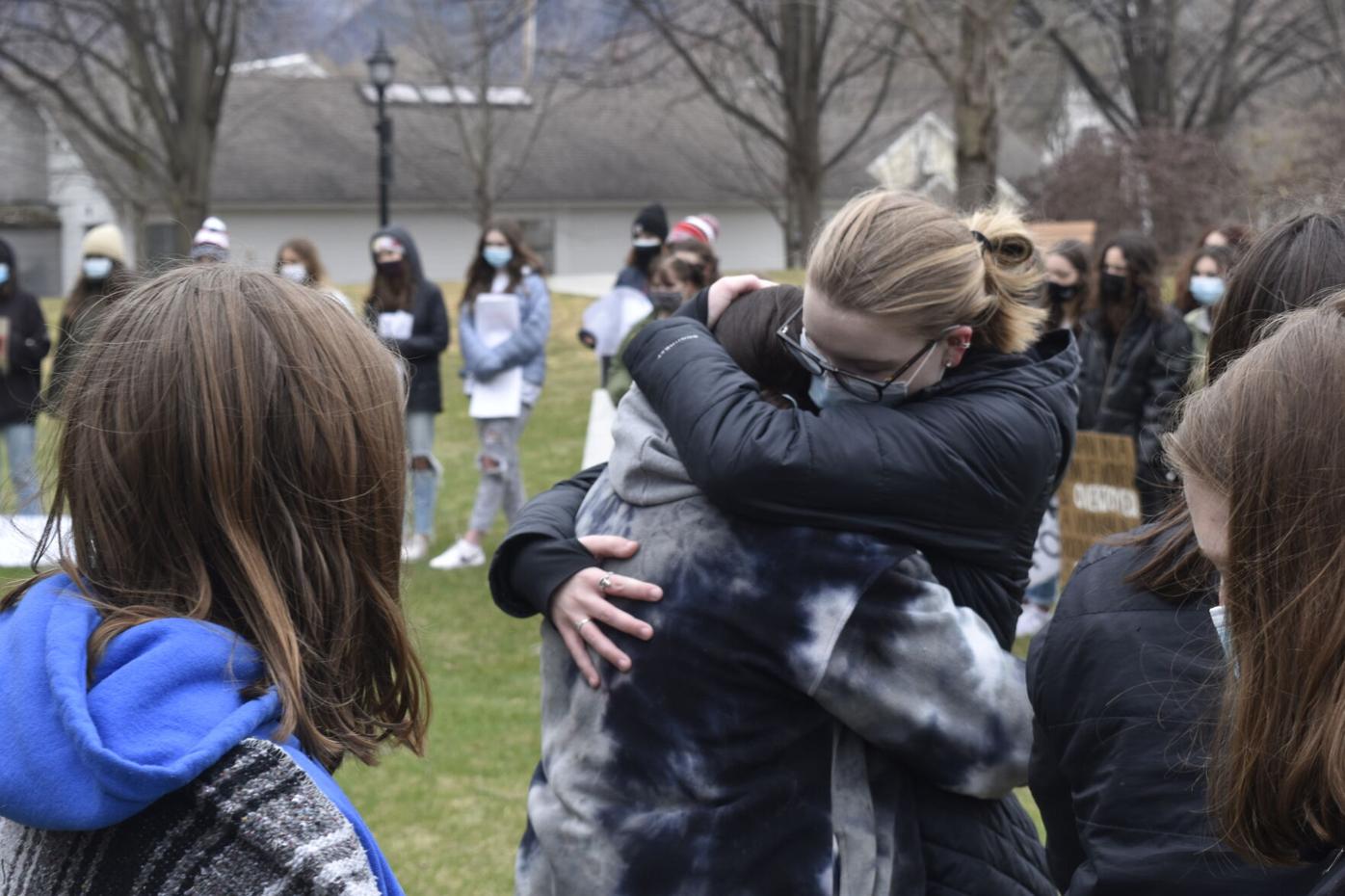 A student is comforted by friends after speaking at a protest against rape culture April 2. 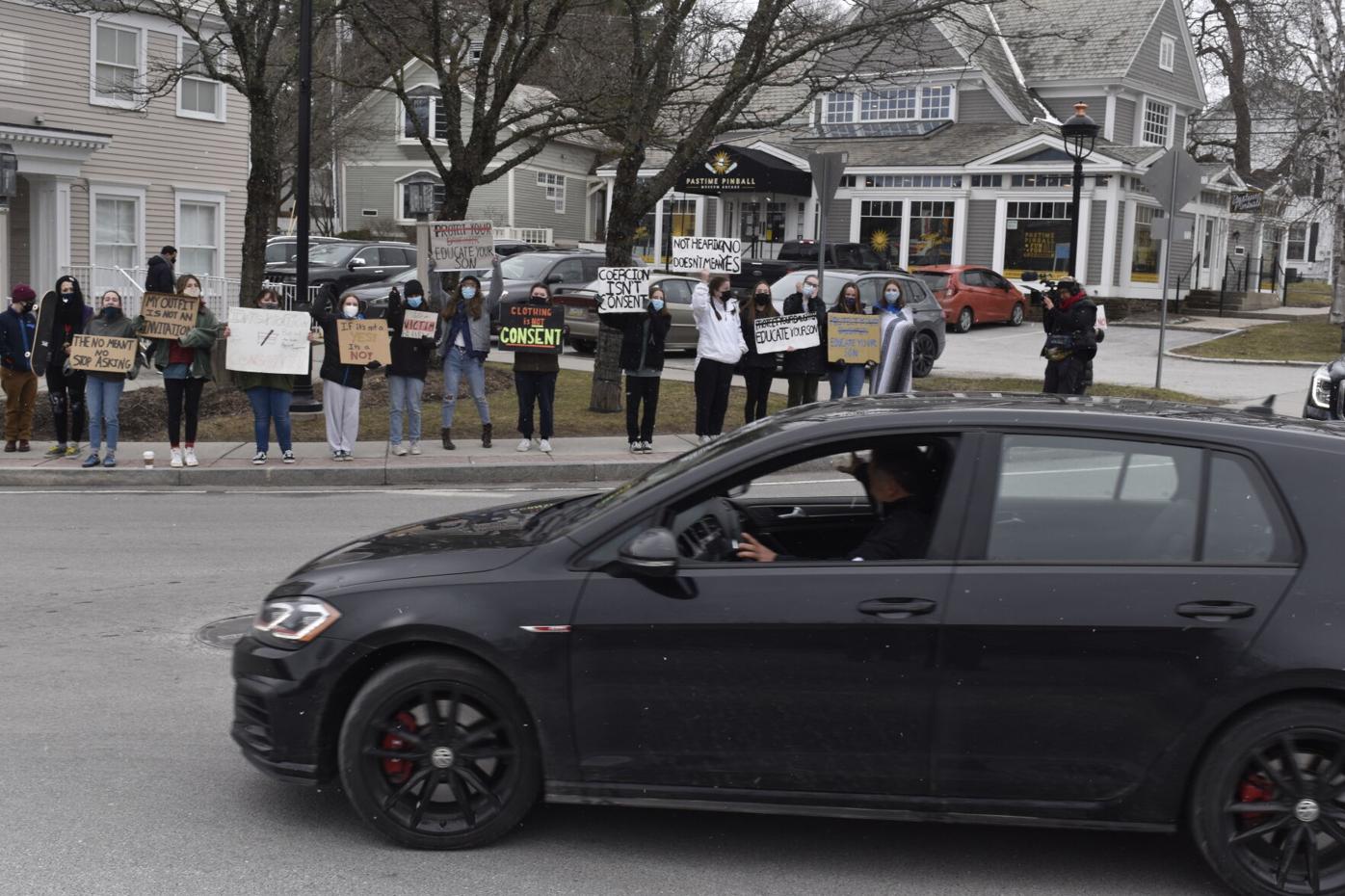 Students march from the roundabout to the town green in Manchester during a protest against rape culture April 2.

Students hold signs at the roundabout in Manchester during the protest.

Students hold signs at the roundabout in Manchester during a protest against rape culture April 2.

A student is comforted by friends after speaking at a protest against rape culture April 2.

MANCHESTER — Chanting “no means no,” more than 50 area high school students took to the streets April 2 to decry rape culture and speak out against violence.

Students from Burr and Burton Academy, Long Trail School and Arlington Memorial High School positioned themselves around the main roundabout in Manchester holding signs and chanting. They were greeted by a steady stream of honks of support by passing motorists.

They carried signs with messages such as, “Hold your friends accountable,” “Educate your son,” “My clothes are not consent,” “They are not asking for it,” and “1 in 6” for the statistic that one in every six women will be the victim of a rape or sexual assault in her lifetime.

The students brought their passion to the roundabout and when they walked down to Factory Point Town Green they put words to their passion.

Forming a semi-circle they listened as about a dozen students told their stories of being made to feel uncomfortable, being scared to walk alone, choosing not to wear certain clothing for fear it might make them a target and some told very personal stories of the very real damage that had been inflicted on them that went beyond words and stares.

For some, the pain is still fresh.

One young woman spoke passionately before breaking down in the support of her friends’ arms.

For another hour, they shivered in the 27-degree weather, hoodies up and wrapped in blankets to stay warm as they heard statistics like 1 in 6.

The speakers pointed out that females 16 to 19 years of age are four times as likely to be victims of sexual violence than the general population.

Rates of sexual violence are even higher for people of color and the trans community.

Even men and boys are at risk, with 1 in 10 males being the victim of a sexual assault or attempted assault in their lives.

Vanessa Kusel of LTS, told the crowd she thought that’s just the way it was.

“I, like many other women, have resigned myself to the fact that being sexually harassed is something to expect. A fact of life,” Kusel said. “I have never felt like I could prevent it from happening, I could only hope that it would not escalate into something more, something that I know so many fellow women have experienced.”

She said she’s learned the skills to not be a victim and to fight back.

“It has become clear that this current method of teaching girls how to not be raped instead of teaching boys to not rape isn’t working,” Kusel said. “It has never worked.”

And she had a message for the males in the crowd who were there in support.

“Now I know a lot of you are thinking, ‘I agree with what she’s saying, but I’ve never participated in rape culture,’” Kusel said. “I doubt that.

She said it’s time to stand up against the objectification of women.

“I implore you all to adopt a zero-tolerance policy for when you see or hear any of your fellow peers demeaning women,” she said. “Don’t be afraid to say something, ruffle a few feathers.”

Another speaker, Julia Brand of Burr and Burton Academy, said current policies are about blaming the victim than holding the guilty accountable.

“Whether you have seen it with your own eyes or not society has normalized rape and sexual assault to such an extreme where women are living in a constant state of fear,” Brand said. “

She compared rape to a car crash where the police immediately start asking the driver that is hit why they slowed down rather than asking the other driver why they ran into the back of their car.

“Instantly, any sane person would be like ‘hey it’s the responsibility of the driver behind me to pay attention, how is this my fault?’” Brand said. “Well, that’s how it feels to be a sexual assault victim.”

And, she pointed out that rape culture isn’t men versus woman.

“This isn’t a men versus women’s issue this is a people versus abusers issue,” Brand said. “So be an advocate and you can potentially change someone’s life.”

Other speakers told the group that making signs and raising their voices was the first step, but they needed to follow up.

The organizers of the event included Kusel, Anna Mathewson, Amelia Vickery and Noel Schlageter from Long Trail, and Noah Forest of Burr and Burton, said the group plans to follow up with more actions.

On their agenda are actions such as going after dress codes that treat men and women differently, modifying sex education curriculums to mandate teaching complete consent, creation of anonymous reporting systems for sexual misconduct, and creating an environment where their peers are comfortable speaking out against rape culture.

Contact Darren Marcy at dmarcy@manchesterjournal.com or by cell at