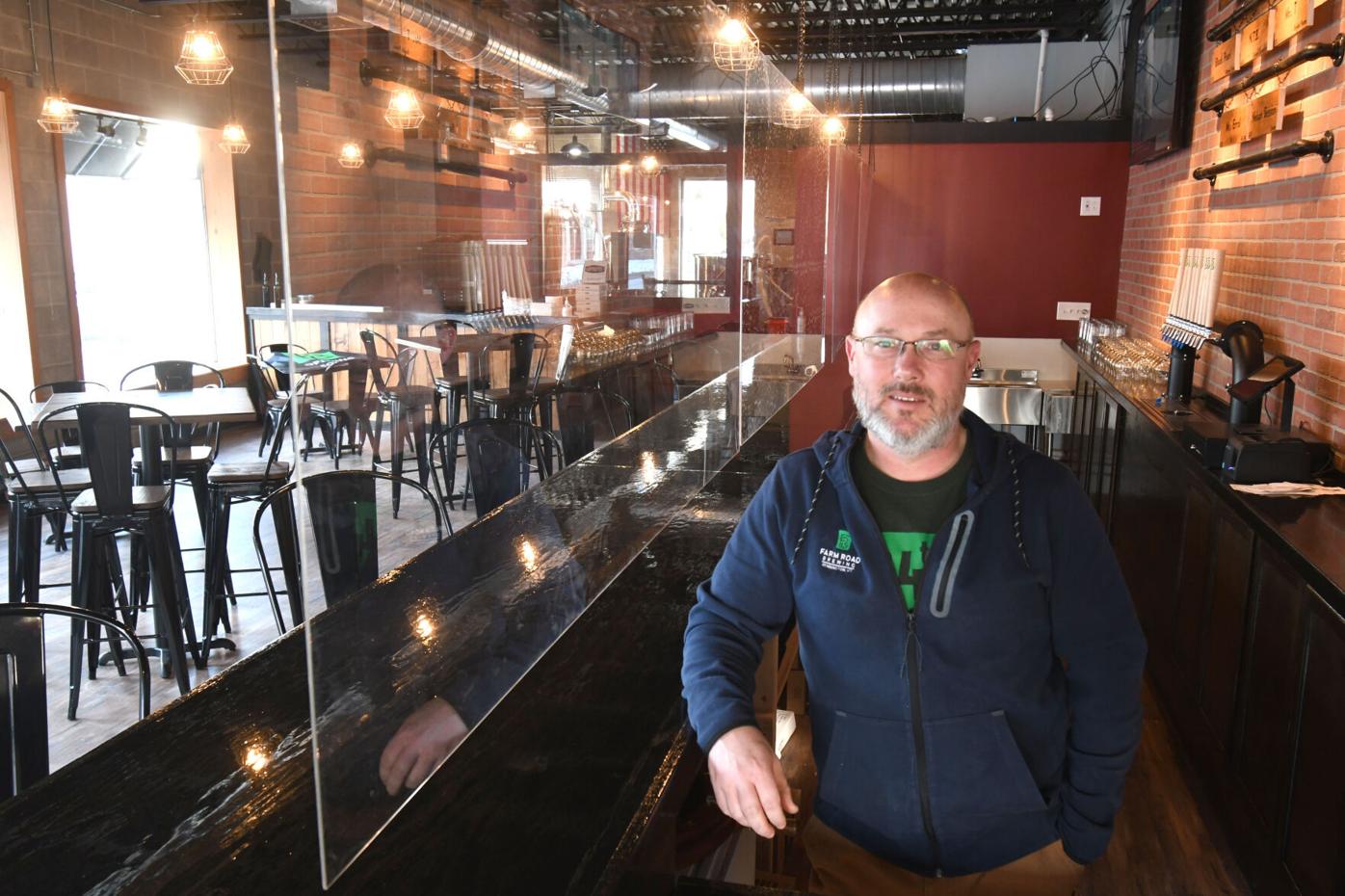 Seth Barrows stands behind the bar of Farm Road Brewing at 400 Main Street in Bennington which is opening to the public today. 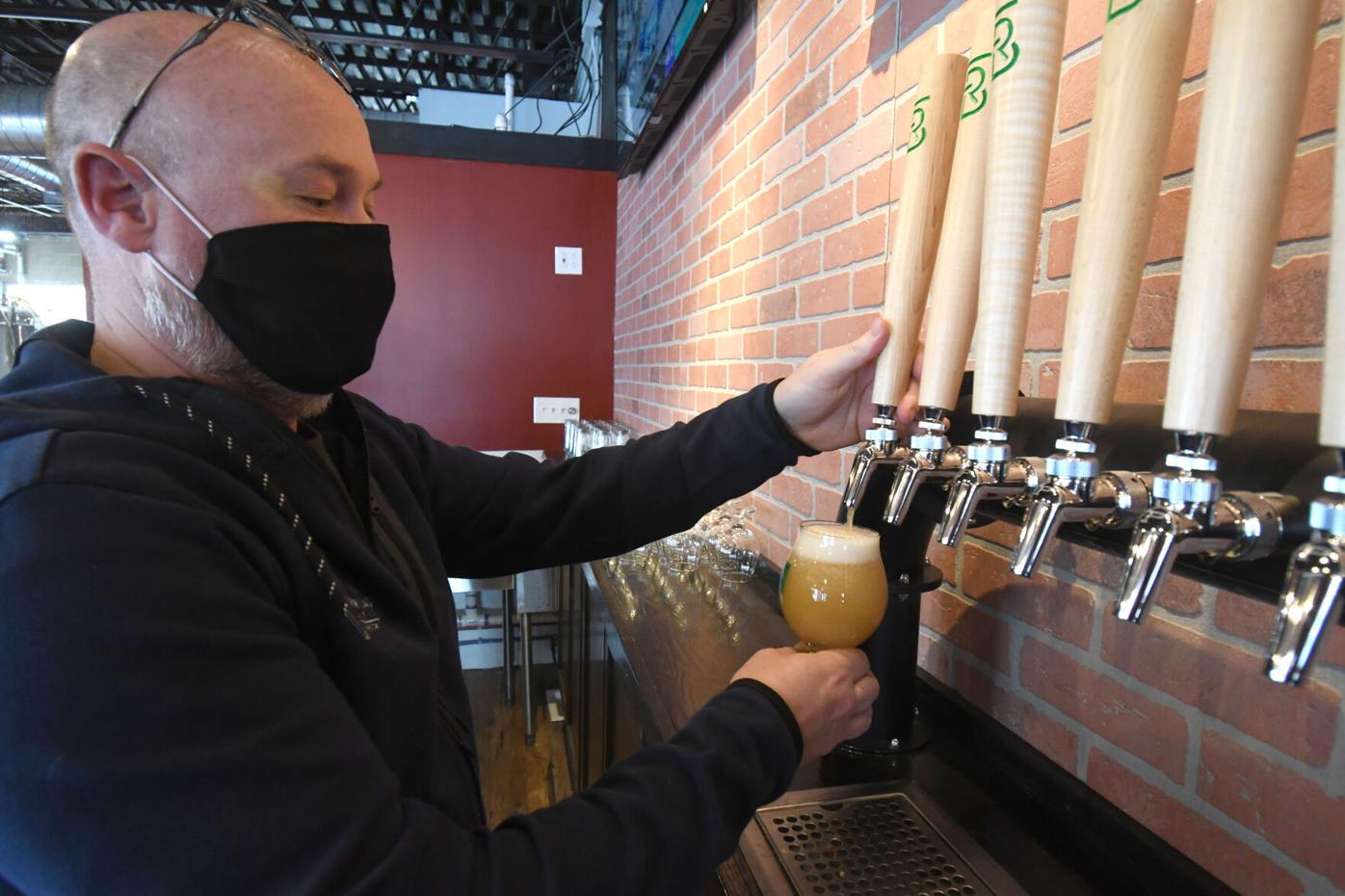 Barrows pours a glass from the tap behind the bar.

Seth Barrows stands behind the bar of Farm Road Brewing at 400 Main Street in Bennington which is opening to the public today.

Barrows pours a glass from the tap behind the bar.

BENNINGTON — A new craft brewery and taproom located at the Four Corners is slated to open this Friday, though not with the sort of party its owner might once have envisioned.

Seth Barrows, the owner of Farm Road Brewing, which is located at 400 Main St. in downtown Bennington, said that, in light of the continued risk of the coronavirus, perhaps a one-year anniversary party will have to suffice.

“We’ll have to play it by ear,” Barrows, 48, of Arlington, said in an interview this week.

Barrows said seating at the 35-seat taproom is appropriately spaced out, and the bar is fitted with a plastic barrier. He also plans to offer four-packs of his beers to-go, though that option won’t be available for the opening weekend. Outdoor seating will become available in warmer weather.

Though he signed the lease for the space nearly one year ago, Barrows said the project really has been in the works much longer than that.

It was about seven years ago that he started homebrewing beer and quickly came to think, “This is what I want to do,” he said.

That led Barrows to complete a six-month American Brewers Guild program in Middlebury.

Farm Road Brewing’s taproom has a dozen taps, Barrows said. One will likely feature a cider, but the rest will feature beers brewed at the facility. Currently there are eight on tap: two New England IPAs, a blonde ale, an oatmeal stout, a session IPA, a saison, an English-style porter and a light beer named “NTB,” or “Not That Bad.”

NTB was the first beer Barrows brewed at the Main Street space on the new system.

The beer took its self-effacing name — at Barrows’ wife’s suggestion — from the common reaction of multiple taste-testers.

Barrows said he plans to continue to offer a broad array of beer styles and has a lager in the works right now. The taproom will also be serving a couple of wines from Shelburne.

The business is located a short walk from two other breweries: Harvest Brewing, at 201 South St., and Madison Brewing Co. Pub & Restaurant, at 428 Main St. Barrows said that sort of concentration will strengthen Bennington’s appeal to beer tourists, who might be less likely to make the trek if there were only one facility to visit.

Financing for the new endeavor includes a loan of $250,000 through the Vermont Economic Development Authority and a smaller loan from the town of Bennington, according to Barrows.

As the business ramps up, Barrows, who grew up in Dorset and Manchester and attended Burr and Burton Academy, is winding down a decades-long career in the military. His upcoming retirement date of May 1 will mark 27 years of total service in the U.S. Navy and, more recently, the New York Air National Guard.

Thanks to saved-up vacation time, Barrows said visitors can expect to find him behind the bar, pouring beers. He eventually plans to hire bartenders but still plans to spend lots of time at the establishment.

As a brewery patron, “it’s awesome” when the person who brews the beer is the one who serves it, Barrows said.

More information about the business is available on its website, farmroadbrewing.com.

Luke Nathan can be reached at lnathan@benningtonbanner.com.