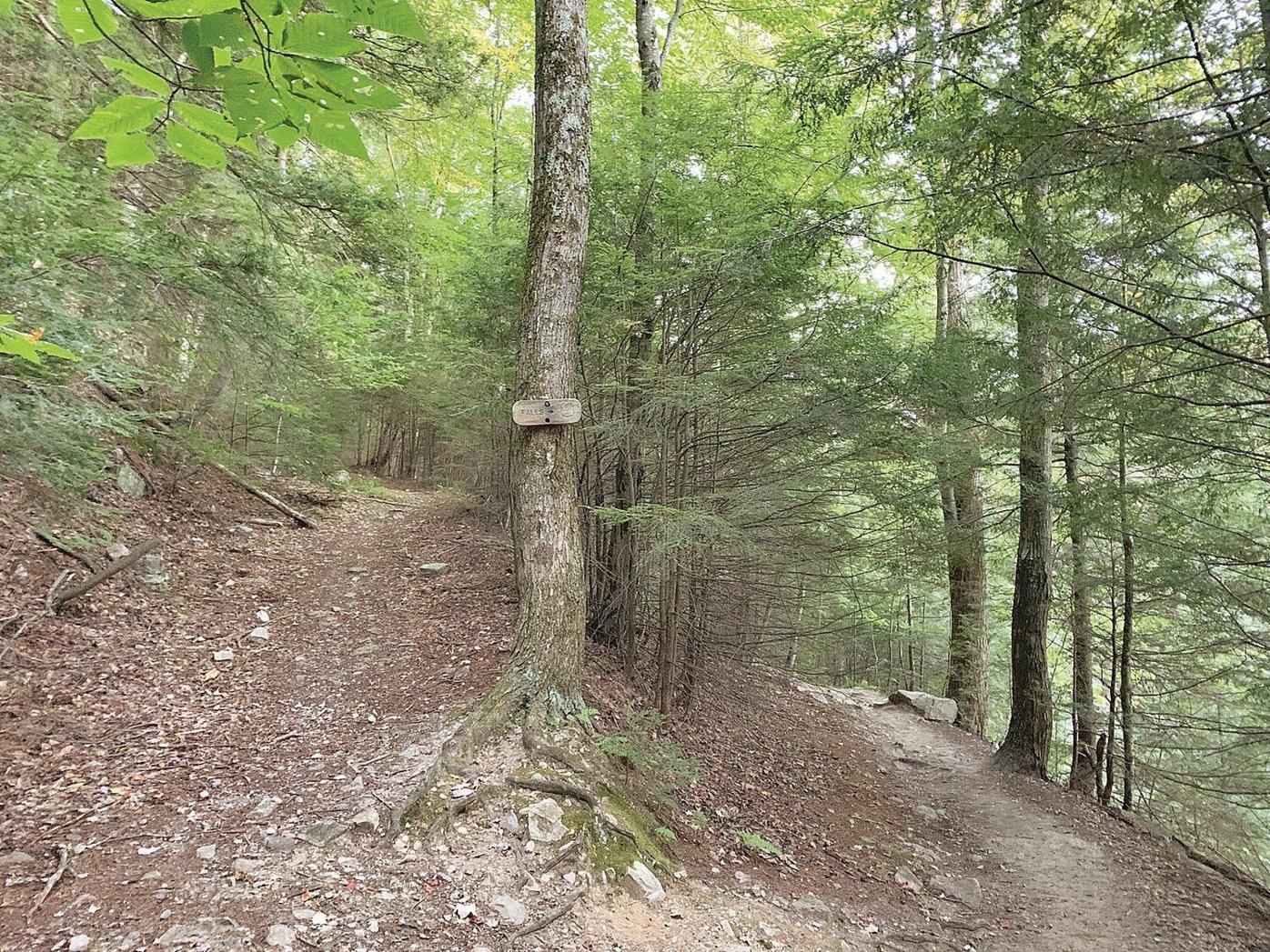 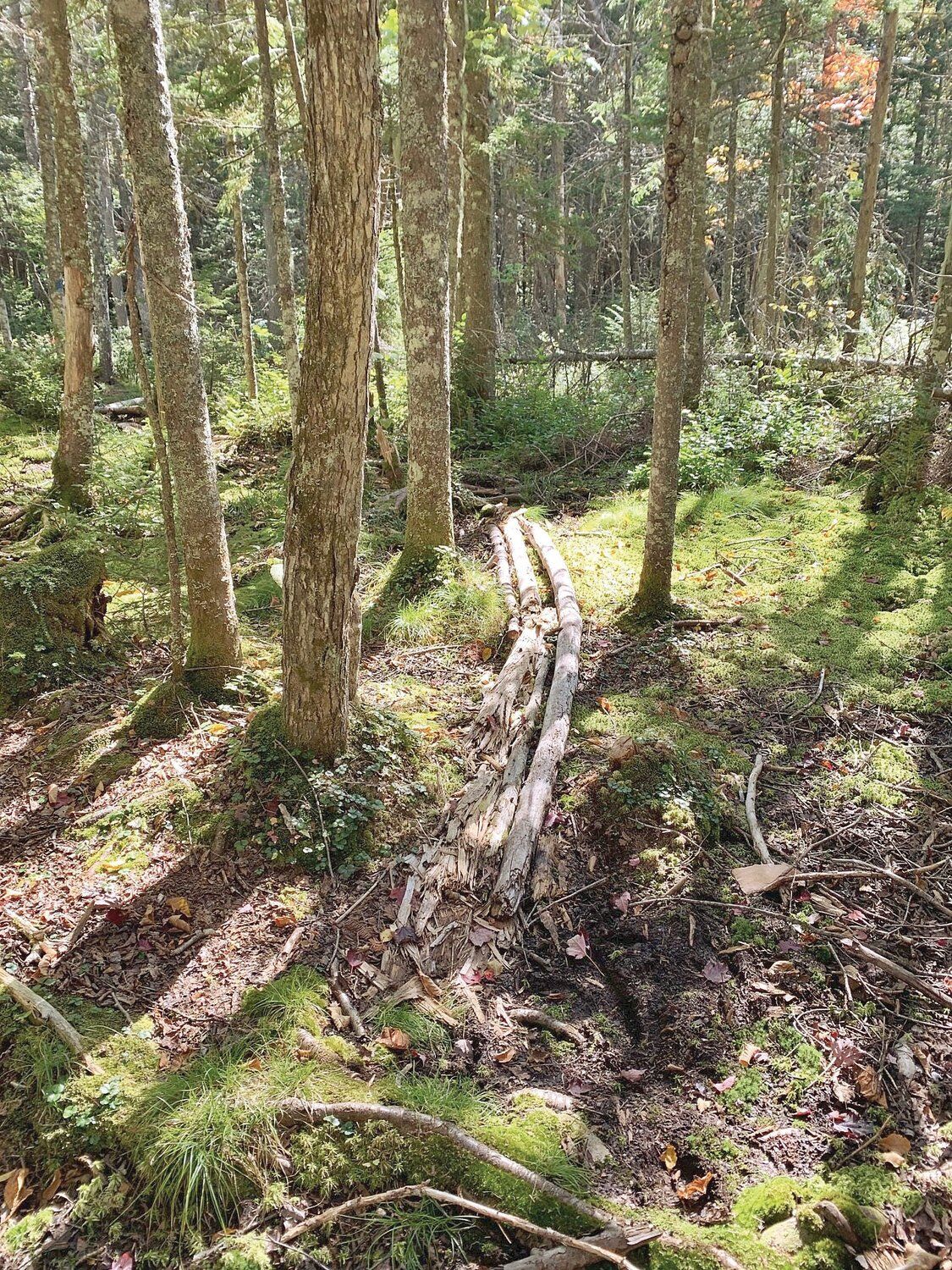 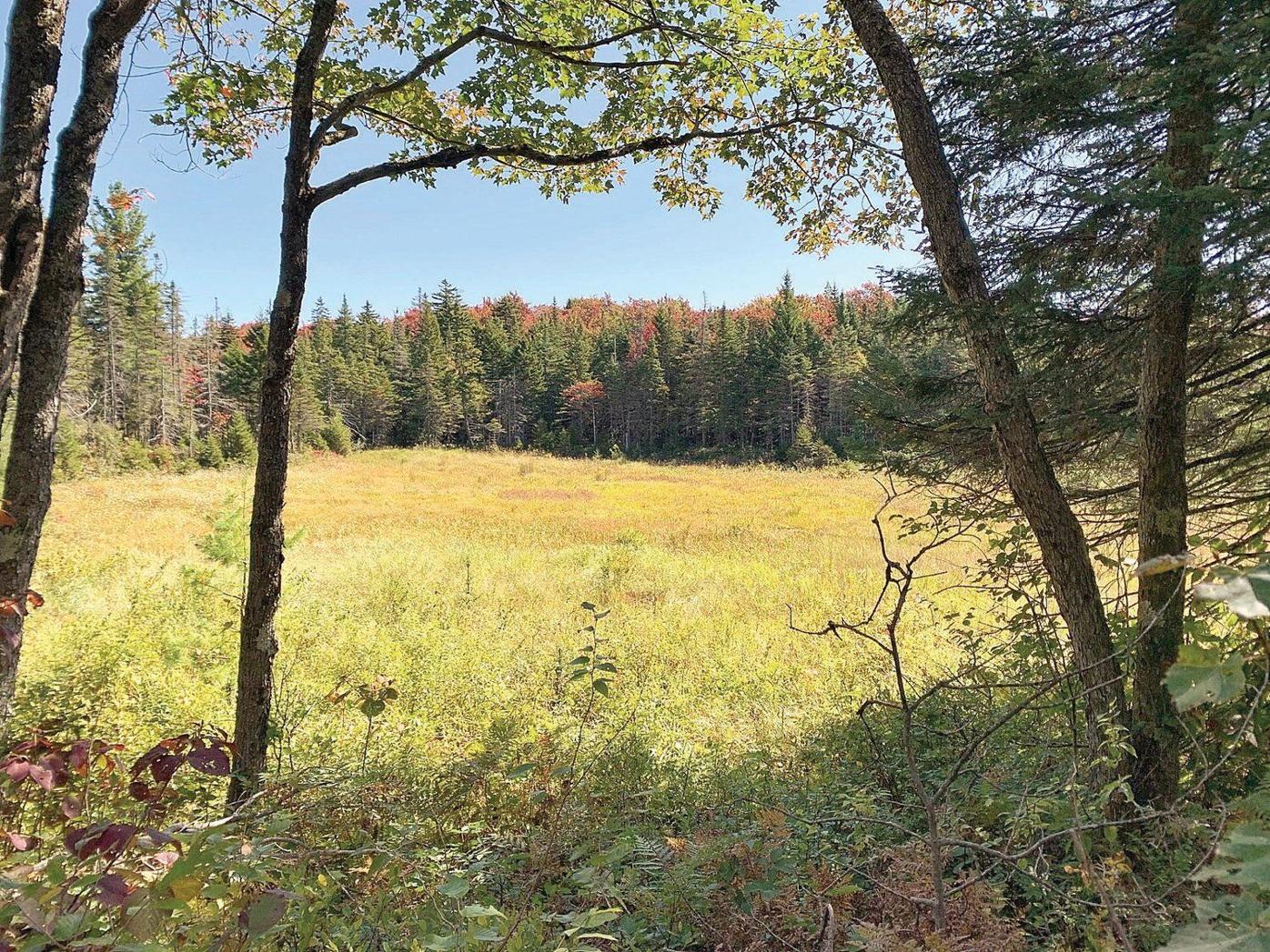 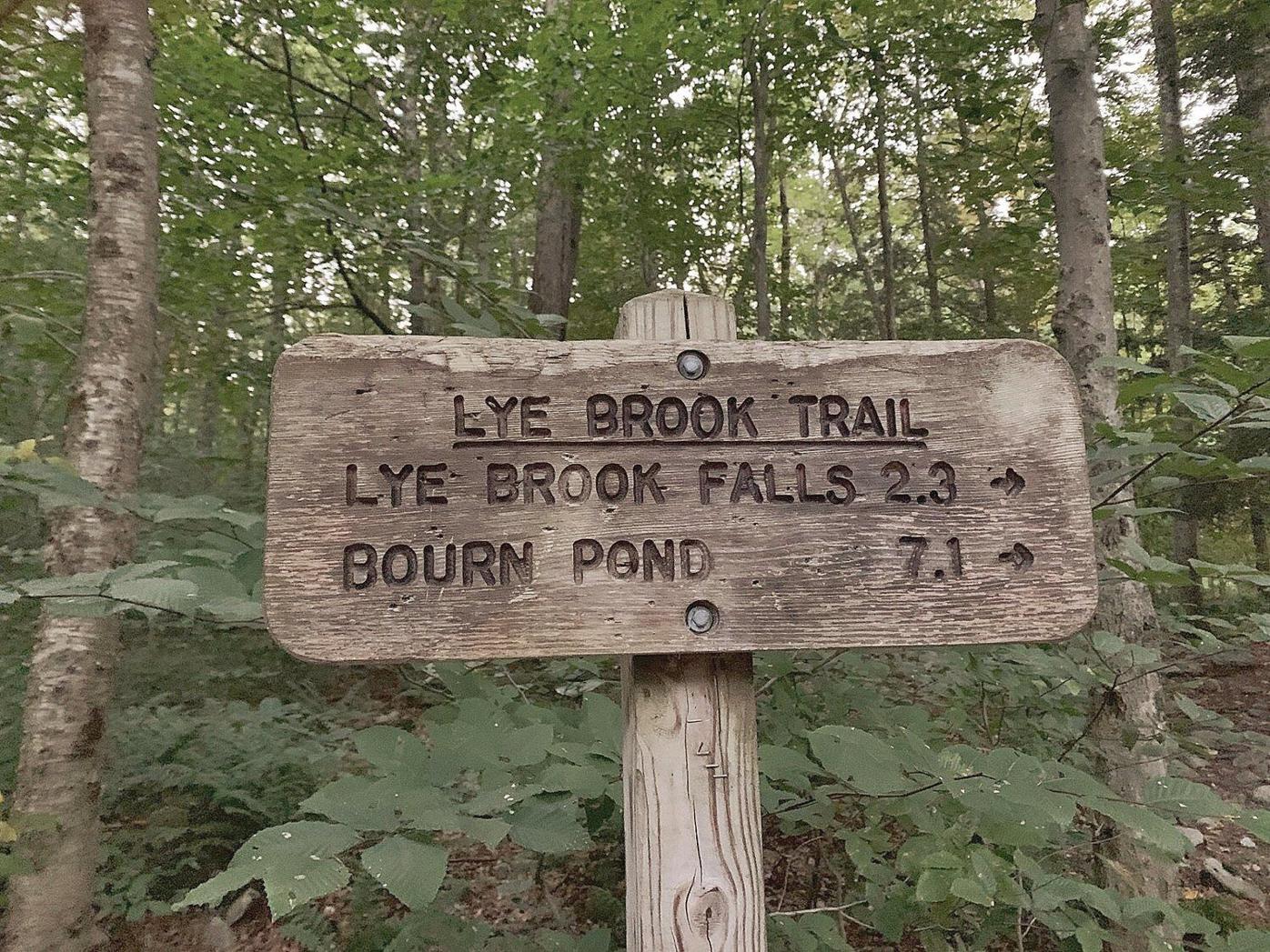 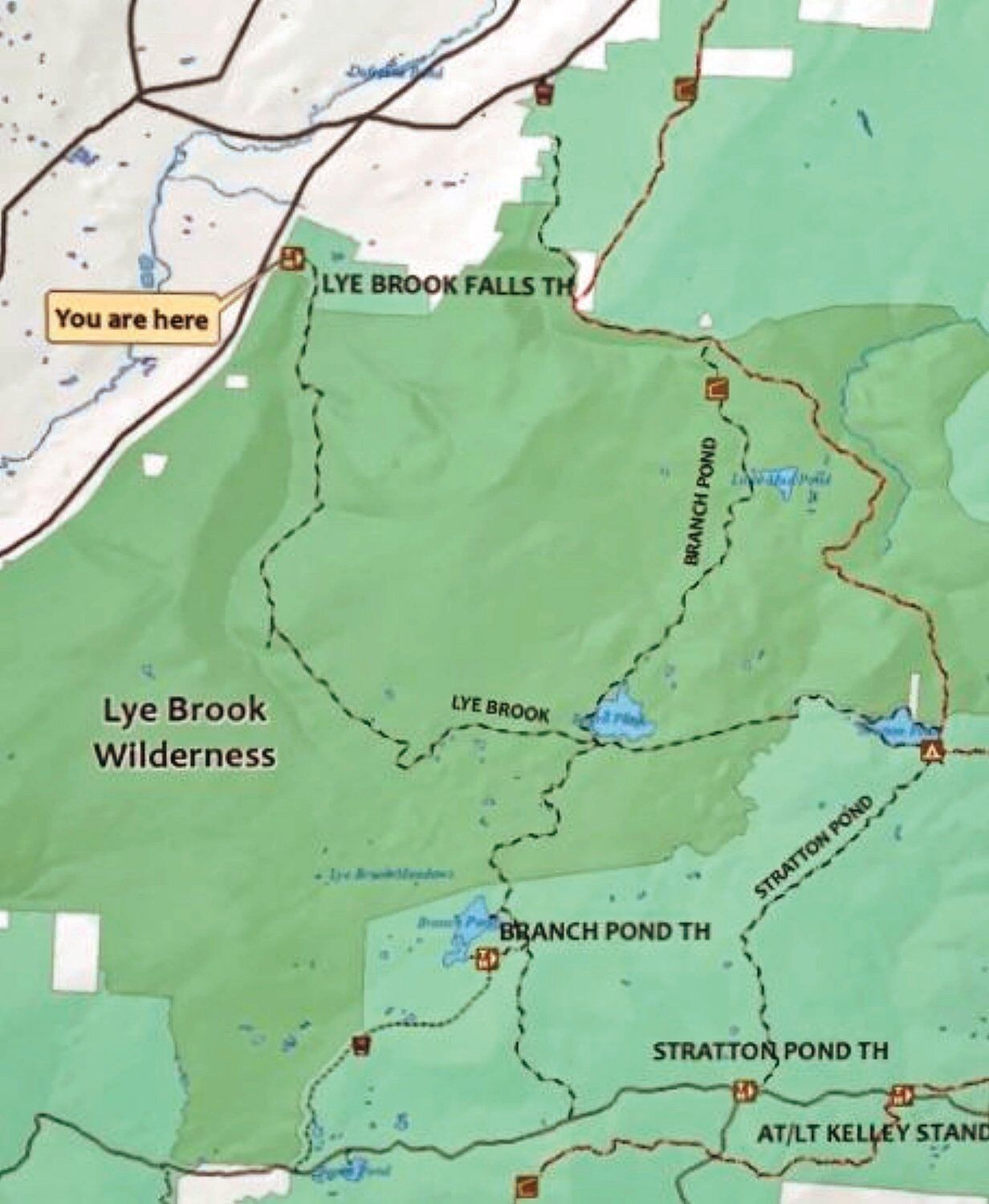 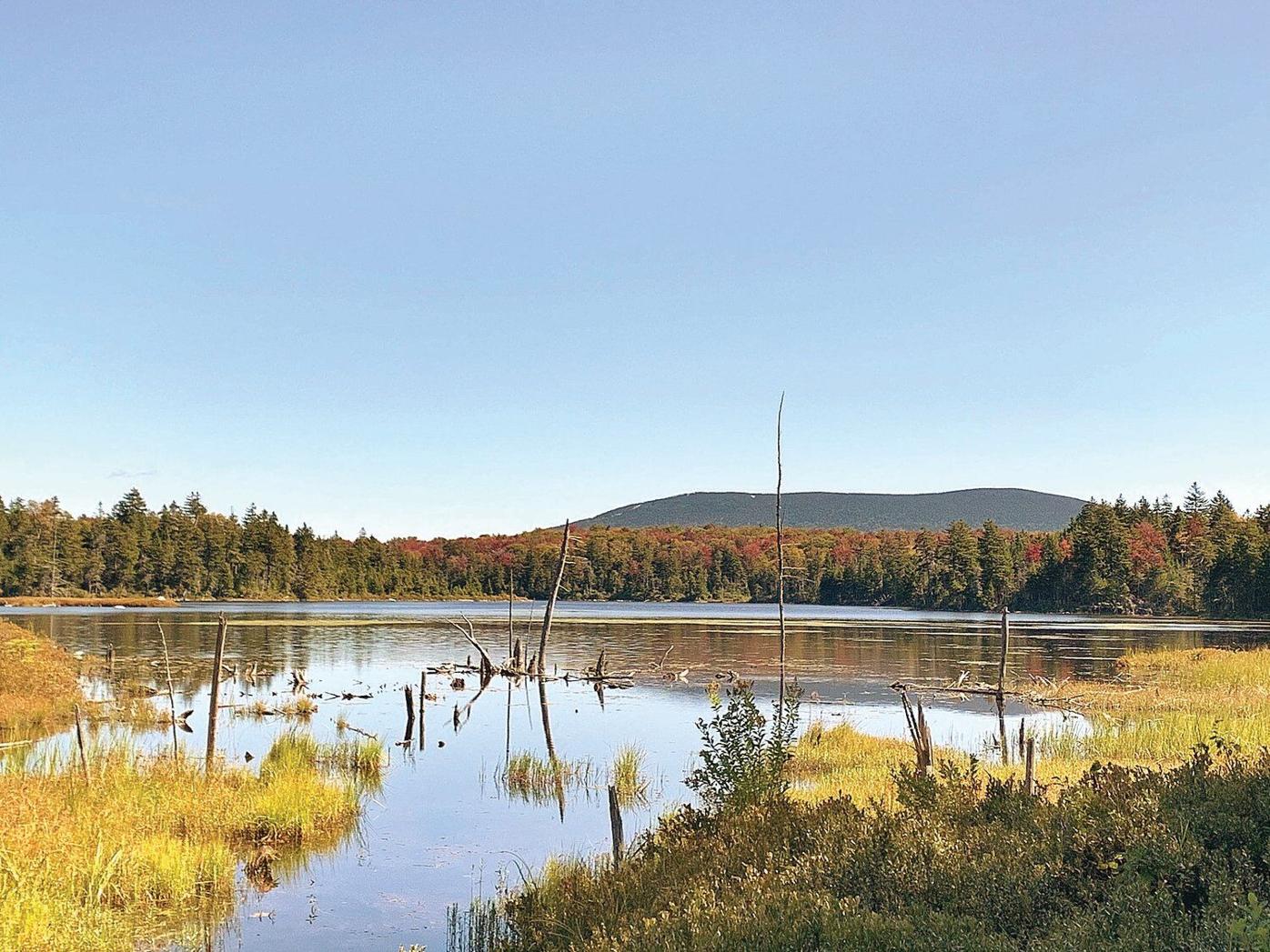 MANCHESTER CENTER — Some hikes pay for your effort with wonderful panoramic views from high places. Others bring you to an interesting feature such as a gorge or a falls or a pond.

Hikes from the Lye Brook Wilderness trailhead in Manchester Center fall into the latter category. Most popular by far is the 2.3-mile hike to Lye Brook Falls. During my first hike there on Labor Day Weekend, 2019, I don't think I was alone on the trail for more than two or three minutes at a time. So many people were at the falls that I could only access and see part of it.

The hike up to the falls follows mostly a very rocky course rising from about 760 feet above sea level at the parking area, to about 1,440 feet at the falls. On the way up, once you've done lots of hard hiking ascending the trail, it splits in two. To the right, heading somewhat down, is the spur path to the falls, a 20-minute walk away. Rising up to the left is the trail into the interior of the Wilderness.

It has a wild and unused aspect to it that the well-worn hike to the falls does not. This path leads to Bourn Pond, about 5 miles from this intersection and 7.1 miles from the trailhead. The distance to the pond seemed to make a hike there out of the question, especially as I would need to hike the same distance back to my car, more than 14 miles. My usual hike limit is at most 6 to 8 miles total. I was intrigued, however, and began to study all the maps of the area I could access on the Internet.

On Nov. 3, 2019, I hiked up into the Wilderness past the spur to Lye Brook Falls, across upper Lye Brook high above the falls on the mountainside. I kept going and stopped after about 2 hours 40 minutes of hiking at an elevation of about 2,340 feet. I took photos and the GPS coordinates of where I stopped. Days get short in November, so a push to the pond was out of the question until 2020.

This was going to be the year I hiked in the Adirondacks, the Whites and maybe even the Catskills. I was going renew my long-lapsed membership with the Appalachian Mountain Club and maybe join the Green Mountain Club, too. Then came COVID-19. My exercise has been mainly limited to socially distanced walks at outdoor athletic fields in the area. Since mid-March I have done just a handful of hikes. In every case, I have tried to pick days, times, weather and locations to avoid crowds. One of the best ways to do so is to start really early.

And so on Sept. 7, I left my car at the Lye Brook Wilderness Trailhead at 7:01 a.m. bound for Bourn Pond. I turned around at noon, still about two hiking miles from the pond. I made it back to my car at 4:16 p.m.

I decided on one final attempt to reach Bourn Pond — at least for this year — on Sept. 19. I would utilize every available minute of daylight as summer quickly approached fall and the leaves began to turn color. Starting even earlier and trying to hike faster, I left my car at the trailhead at 6:39 a.m., just after sunrise. It was 31 degrees. Climbing the rocky path I concentrated on winding my way between the stones and roots to reduce the stress on my feet — an important consideration for the challenging slog back later in the day.

I climbed up to the spur to the falls in one hour 14 minutes, 17 minutes faster than I had on Sept. 7. Bypassing the spur, I kept climbing until about 9 a.m. On another mountain to the west, through the trees, I could see a mass of exposed white rocks, a spot reminiscent of the "white rocks" on the mountains to the east of Bennington.

The path levels off at about 2,400 feet. Soon I was past the south end of the mountain along which I had been ascending. At this point you are now on the plateau on which most of the wilderness area sits. The pond, still several miles away from this point, sits at about 2,500 feet elevation. Soon the terrain changes to moist, marshy and at times boggy. You see more ferns, mushrooms, moss and cross more patches of mud. Climbing up from the trailhead, the path was mostly straight. Now, there are frequent twists and turns — you go up a rise here and down a dip there to a small stream bed.

For three hours after leaving my car, I encountered no one. Then I heard a cough behind me. Two guys in shorts and small backpacks ran past me, the one in the lead thanking me for getting out of the way, and on they ran. Miles into the woods, the running struck me as very unusual.

Out on this plateau, the woods were thinner and the trees obviously younger. I reached the young birch tree where I had stopped and turned back on Sept. 7. I was on a much faster pace on this hike, an hour faster to reach this point. As I pushed on, I crossed a bog on thin, unsteady logs and then at 11:30 a.m. came up upon a big, beautiful meadow on my right. These meadows are numerous in the center of the wilderness.

"A century ago, heavy logging occurred throughout this area," states the official government website. "A network of railroad lines carried the timber from the plateau down into Manchester. Remnants of railroad grades and old logging roads remain, although these are largely overgrown."

Bourn Pond is just one of several large ponds in the wilderness. Some 4.5 miles of the Appalachian Trail runs through the western part of the tract. On my Sept. 7 hike, hours into my excursion, I ran into a young man hiking in the opposition direction. We had a pleasant discussion at a safe distance. He told me how far I was from Bourn Pond and I told him how to get to Lye Brook Falls. He had come to that point from a different trailhead. I had been so focused on taking the Lye Brook Trail to Bourn Pond that I hadn't paid much attention to other trails into the wilderness. Maps show that both the Branch Pond Trail and the Stratton Pond Trail enter the wilderness from Arlington to the south.

On my Sept. 19 hike, I ran into a father and daughter at 11:40 a.m. The man told me I had about a mile to go to Bourn Pond. At the rate I was hiking, he was about right. At 12:33 p.m. I came to the intersection of the Lye Brook Trail and the Branch Pond Trail. I could see Bourn Pond through the trees. However, my expectations of an accessible shoreline and and an immediate open vista to the pond were disappointed. Trees, underbrush and plenty of reed-like plants growing from the water prevented this. I hiked north on one path past a campsite and came upon a dead end with a compost toilet. I retraced my steps and hiked the Branch Pond Trail north along the west side of the pond. I eventually found a spur off this trail that took me to a narrow open spot on the west side of the pond. It was 12:53 p.m.. more than six hours after I left my car.

The pond was beautiful. The trees around it were newly displaying the colors of fall. Stratton Mountain rose in the distance to the east. I had finally made it to Bourn Pond.

Now, the hike back loomed before me. I had gone far out, much like the man who throws his hat over a wall to force himself to climb over it. I gladly would have accepted a Star Trek-style transporter trip beaming me immediately back to my car. But I still had plenty of sunlight, clear and cool weather, two bottles of water, and an apple. My effort to minimize stepping on rocks and roots early on had paid off, and there was still some life in my tired legs and my feet didn't hurt.

I'm looking forward to hiking on those paths into the Lye Brook Wilderness from the south. For a number of reasons, including diminishing sunlight, the upcoming deer season and caution about my health, this likely will have to wait until next year.

If you'd like to leave a comment (or a tip or a question) about this story with the editors, please email us.
We also welcome letters to the editor for publication; you can do that by filling out our letters form and submitting it to the newsroom.
© Copyright 2020 Manchester Journal, 3624 Main Street, Room 204 Manchester, VT | Terms of Use | Privacy Policy
Powered by BLOX Content Management System from TownNews.com.