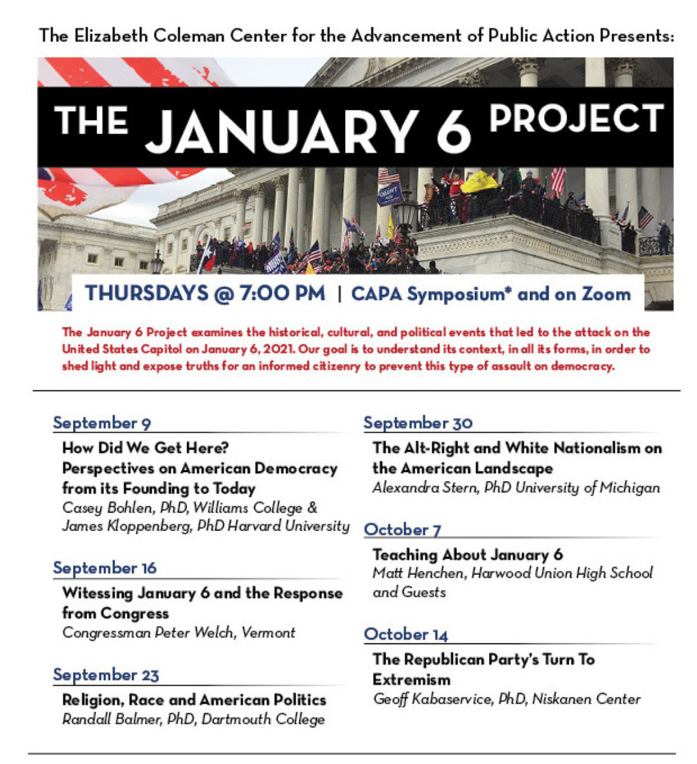 A poster listing six forums on the mob attack on the Capitol building on Jan. 6. The forum project was developed by the Center for the Advancement of Public Action at Bennington College. 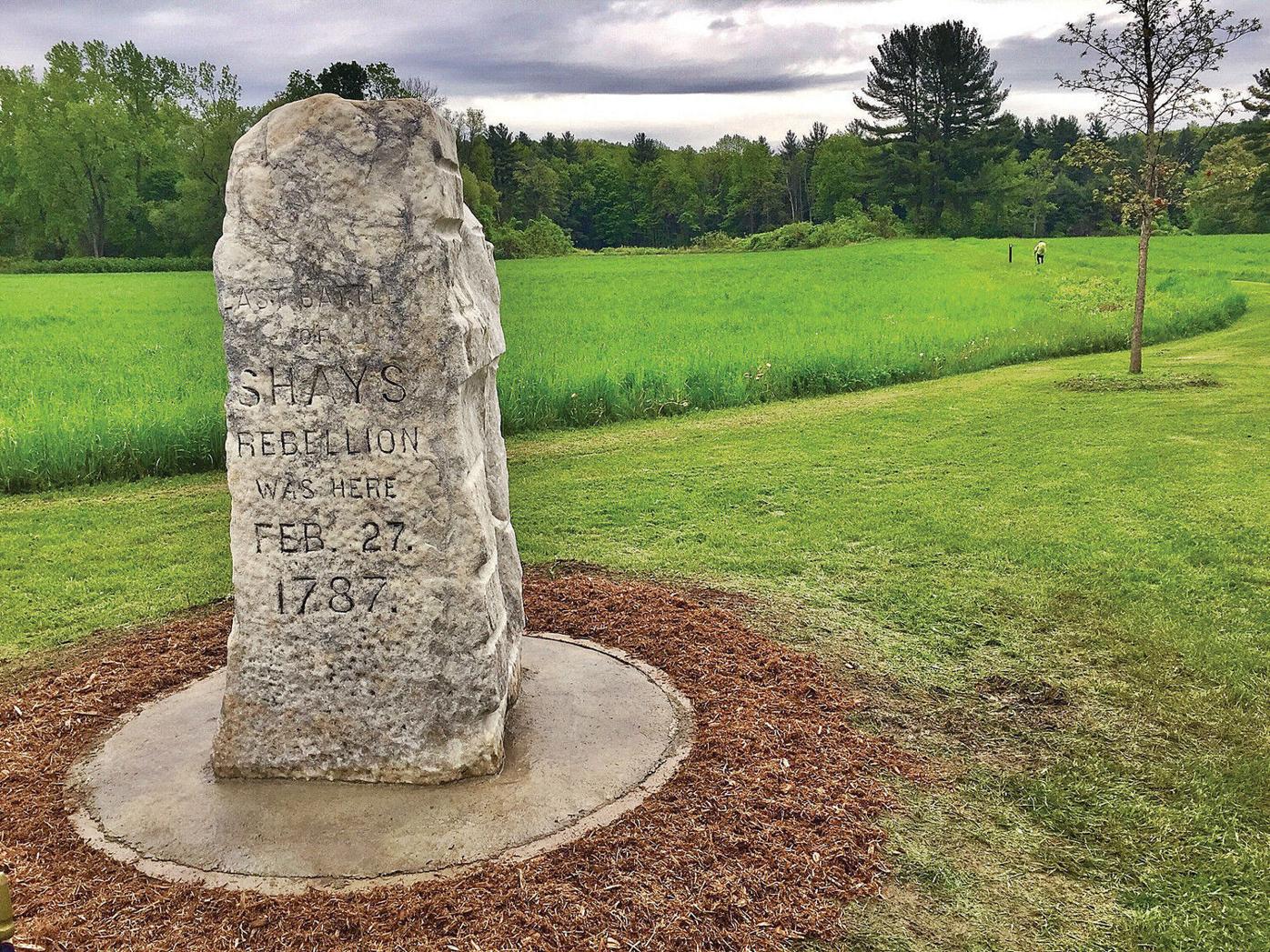 The Shays' Rebellion monument. Since the nation’s early years after independence from Britain, often violent extra-legal protests and the repression of the rights of political opponents often punctuated American political contests and social movements. That includes the 1787 Shays' Rebellion in Massachusetts over farm foreclosures.

A poster listing six forums on the mob attack on the Capitol building on Jan. 6. The forum project was developed by the Center for the Advancement of Public Action at Bennington College.

The Shays' Rebellion monument. Since the nation’s early years after independence from Britain, often violent extra-legal protests and the repression of the rights of political opponents often punctuated American political contests and social movements. That includes the 1787 Shays' Rebellion in Massachusetts over farm foreclosures.

BENNINGTON — The conditions that led to the Jan. 6 mob attack on the U.S. Capitol echoed anti-government uprisings from our past, but the event also provided a serious, untypical threat to American democracy.

That was the general take of two professors who participated in a forum Thursday at Bennington College — the first of six events at the Center for the Advancement of Public Action, focusing on the events on Jan. 6 insurrection.

Since the nation’s early years after independence from Britain, often violent extra-legal protests and the repression of the rights of political opponents often punctuated American political contests and social movements, Kloppenberg said.

He cited early threats to the central government, like the 1787 Shays’ Rebellion in Massachusetts over farm foreclosures, as well as the years of intimidation and violence by those opposed to freeing African slaves. He also spoke of civil disobedience from those who strove to end slavery, struggles that continued through the Jim Crow and civil rights eras to the current focus on Black Lives Matter.

What seemed unprecedented about a mob storming the Capitol building on Jan. 6, Kloppenberg said, is that it was an attempt to overturn the results of a presidential election.

Quoting James Madison, he said our democracy requires “a willingness to cede” an election after the votes are counted to avoid mob rule.

Disputes stemming from the Jan. 6 attack by a street protest mob, prompted by former President Trump’s claims of election tampering, are in some ways continuing, Kloppenberg said, which means the country “will have to decide if we want to be a nation of laws,” or whether it will allow decisions through intimidation and violence.

Bohlen said he sees the current political disaffection of millions of Americans who reject realities most see as obvious as akin to the phenomenon of the far-right John Birch Society during the height of the Cold War in the 1950s and ’60s.

The Birch Society, founded as an organization during the 1950s, primarily focused on an alleged conspiracy to subvert the United States from within and supplant democracy with an oppressive communist form of government, such as existed in the then-Soviet Union.

Despite compelling evidence to the contrary, Bohlen said, a small percentage of Americans, still likely numbering in the millions, came to believe that President Dwight Eisenhower, who had overseen the 1944 D-Day invasion of Nazi-held France during World War II, was somehow “dedicated” to an ongoing communist conspiracy to subvert and control the United States.

“These ideas seem ludicrous; I hope they seem ludicrous,” Bohlen said, but nevertheless membership in John Birch Society chapters numbered “in the tens of thousands at its peak.”

The organization had local chapters and also focused on local issues, he said, such as whether there should be sex education in public schools.

For a time, he said, it was a vibrant grassroots organization that offered a sense of community for Americans who identified elites and insiders as untrustworthy and organizers of complex conspiracies.

Birchers were generally rejected at the polls by Americans, but they explained their electoral defeats on someone having “manipulated American democracy,” he said, leading to their belief that “the future of the world was at stake.”

Around that time, groups like the Minutemen militias also began to form, he said, which is similar to what is happening today.

Nationally, Americans who might agree at least in part with the John Birch Society were not influential, Bohlen said, but the situation is different today, possibly posing more of a threat to democracy.

Unlike the immediate post-World War II era, the population of the United States has shifted more to the Southern and Western states, and reduced the political clout of the traditionally more liberal Northeast.

In the current era, attempts to prevent some residents from voting to gain a political advantage, obvious legislative redistricting schemes to promote one party, and voter or candidate intimidation pose threats that are increasing outside the Northeast, Bohlen said.

Kloppenberg said partisan newspapers that supported one party or group were common in the U.S. during the 19th and early 20th centuries, but today Americans are “stuck in this storm of information,” from not only 24-hour news television stations but internet-based media and social media.

The most extreme or outrageous statements also get the most reaction, he said, which tends to drive people on both sides of issues to follow suit, widening the divide.

One way to discourage the worst of the distortions and similar acts in the future, he said, would be to bring those responsible for the Jan. 6 attack to justice.

Bohlen said reversing the current bitter divisions will require “the cultural underpinning of listening to others,” which he said largely has been lost.

The internet and cable television news puts more of a focus on national issues, rather than local ones, he said.

His advice, Bohlen said, would be to “engage locally,” and “do something small” that takes one out of their comfort zone.

Simply by participating in local groups or organizations — including sports leagues or teams — Republicans and Democrats are more likely to see one another as part of the same American political tradition, not as bitter enemies, Bohlen said.

$30M in damage during riot

Since that day more than 600 alleged participants in the attack have been arrested and charged.

In addition to teaching, Bohlen is working on a history of the 1960s religious left, tentatively titled “Back to the Garden.”

Kloppenberg is the Charles Warren Research Professor of American History at Harvard. His books include “Reading Obama: Dreams, Hope, and the American Political Tradition.”

The next CAPA forum on Jan. 6, “Witnessing Jan. 6 and the Response from Congress,” will be held via Zoom on Sept. 1 at 7 p.m. It will feature as speaker U.S. Rep. Peter Welch, D-Vt., who was with his House colleagues in the Capitol on that day.

Information on attending the Zoom sessions is available on the CAPA website. https://www.bennington.edu/january-6-project