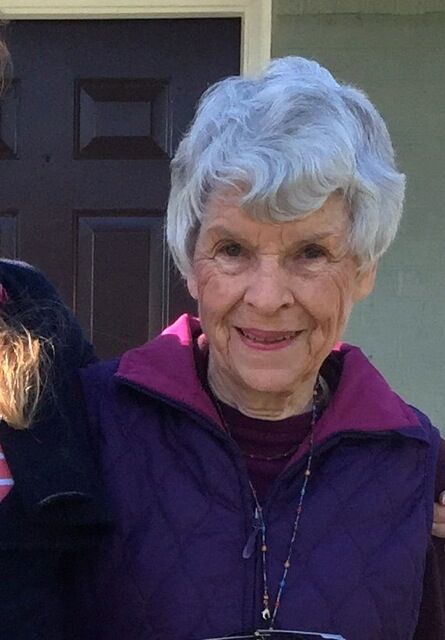 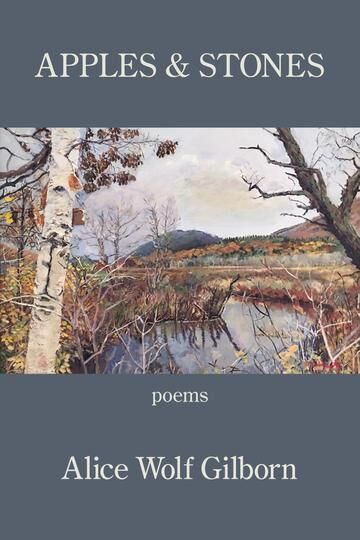 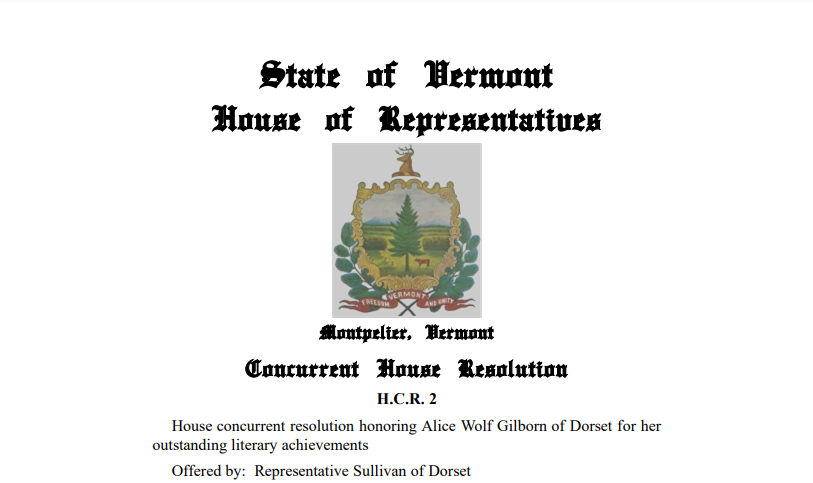 The resolution, introduced by Rep. Linda Joy Sullivan of Dorset, recognizes Gilborn for a lifetime of work.

“Be it Resolved by the Senate and House of Representatives: That the General Assembly honors Alice Wolf Gilborn of Dorset for her outstanding literary achievements,” the resolution reads in part.

Gilborn, who will be 85 years old March 12, said that she was honored by the resolution.

Gilborn said she learned of the honor when a yellow car pulled up beside her while she was walking her dog.

“A very nice woman got out wearing a mask and offered me a manilla envelope, which I asked her to put in the mailbox,” Gilborn said. “I said I’d look at it when I got back. She replied that she was sorry she couldn’t invite me to the State House (due to COVID) and then I realized she was State Rep. Linda Joy Sullivan.”

She said she was unprepared for the honor and both “elated and humbled.”

“I’ve been living in a cloud of congratulations for the last day or two,” Gilborn said. “Now, though, I have to live up to their expectations.”

Gilborn said it was gratifying to be recognized for her work but remains modest.

“There are many who deserve recognition for their work who never receive it,” she said. “I was just doing what I love to do, write and to edit. I like language and the play of words.”

From the Rockies to the Green Mountains

Gilborn’s achievements are numerous and she offers a lengthy resume of publishing her poems and essays.

Her publications include contributions to books, journals, anthologies and magazines.

She has also published her own books, including a memoir about her mother, “What Do You Do With a Kinkajou?” and a book of essays, “Out of the Blue: Blueline Essays.”

She published a poetry chapbook, “Taking Root,” and Vol. I and II of an anthology of Vermont poetry, “Birchsong: Poetry Centered in Vermont.”

This past fall, she published a new book of her own poems, “Apples & Stones,” which was released in September by Kelsay Books.

According to press information, “Gilborn’s poems describe the landscapes, people, and animals in her life, including those of her Colorado childhood, as well as those in Vermont where she has lived for more than twenty years. Nature is the backdrop for the main themes of her poetry, from the Rockies to the Adirondacks to the Green Mountains, stories told through her eyes through the seasons.”

“There’s a lot of Vermont in that book,” Gilborn said.

Gilborn said she began writing stories in the fourth grade, almost all about horses.

“Since we lived on a farm of sorts, I had plenty of models. I loved it when our class was assigned a story in school, and I realized that poetry could be an alternative to short stories.”

She said it was an instructor at Wellesley, Philip Booth, who nurtured her writing.

“[He] helped me with my writing, and we continued to be friends throughout his lifetime,” Gilborn said. “I wrote poems off and on after college and published a few but never got serious about poetry until we lived in the Adirondacks and later in Vermont.”

Gilborn said she thinks poetry is becoming more popular and pointed to Amanda Gorman’s presentation at the inauguration of Pres. Joe Biden as one example.

“I think Amanda Gorman’s presentation at the inauguration was the epitome of the power of poetry, not only the words but their music; her voice, the instrument,” Gilborn said. “They aroused emotion — you could tell by the audience, even with masks. People I know who are shy of poetry were struck by the whole performance.”

She said Vermont, is ripe with the written word and writers of poetry.

“After living in Vermont, for 23 years, I can tell you that there are an abundance of poets, either closet poets who are hoping to publish or professional ones,” she said. “It’s a good atmosphere, if competitive. My gut feeling is poetry is becoming more and more and more available, especially the poetry that excites the younger generations, such as performance poetry. For a while, it was the purview of academics, printed in books. Now spoken poetry has taken on a new importance. That’s a reversion to ancient times, before writing.”

Gilborn, with one book of poetry on the shelves, has more words to share.

“I write when a metaphor or story presents itself,” she said. “I can’t just sit down and write a poem. While I have written a fair number of poems, many won’t see print, for good reason.”

Despite being locked away due to COVID-19, she said it has not been good for her poetic output.

“This pandemic has not inspired me much — it’s a subject I find wearying rather than elevating.”

But she said she may edit a third anthology of “Birchsong: Poetry Centered in Vermont.”

And she said she has enough dog and cat poems ready to go for a book or chapbook.

“I like watching animals, and reading about them, as I think many do,” she said. “There seems to be a surge: we’ve all heard of pandemic pets.”

Gilborn’s newest book, “Apples & Stones,” her memoir about her mother, and volume two of her Vermont poets anthology are all available at the Northshire Bookstore.