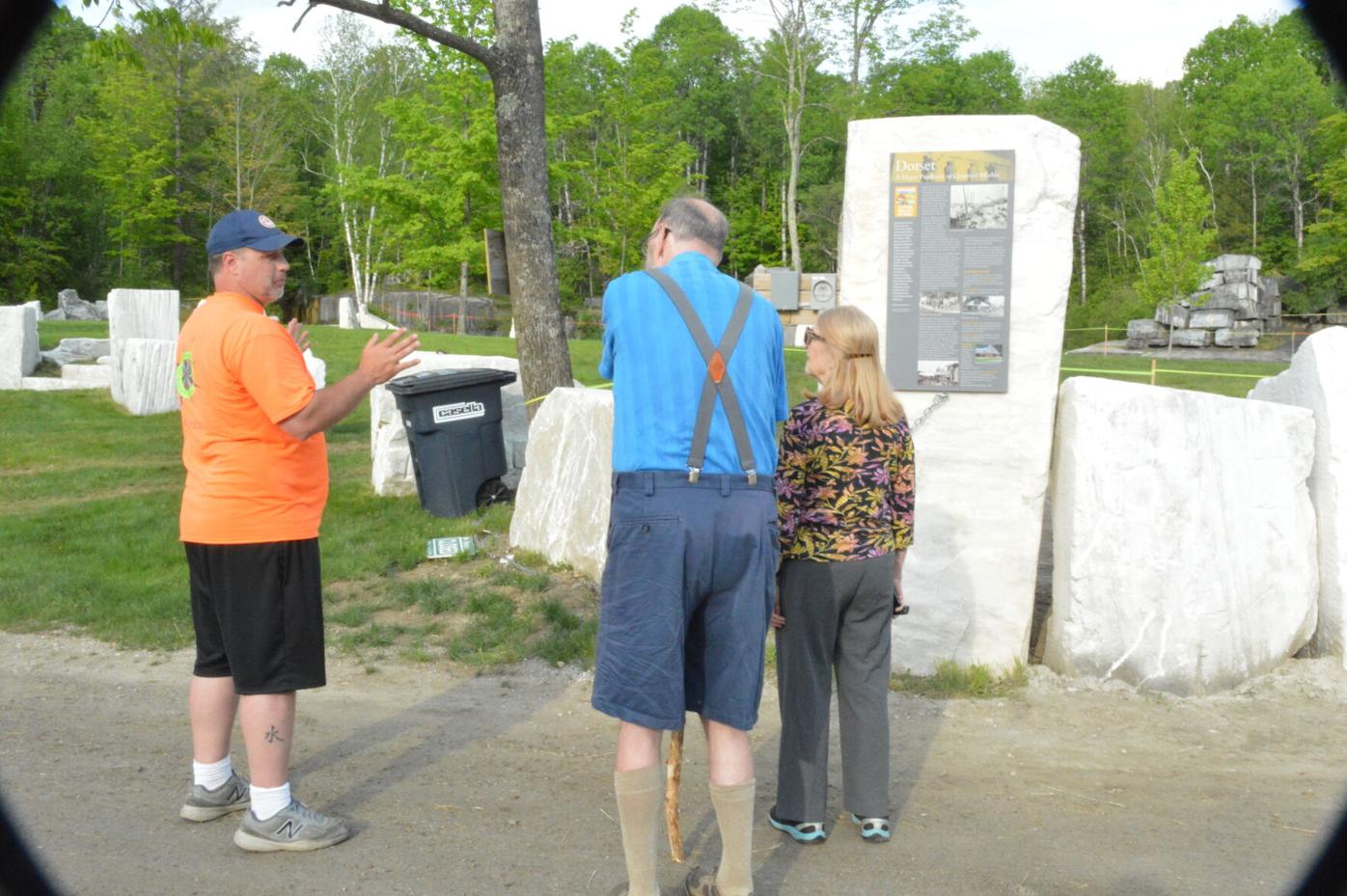 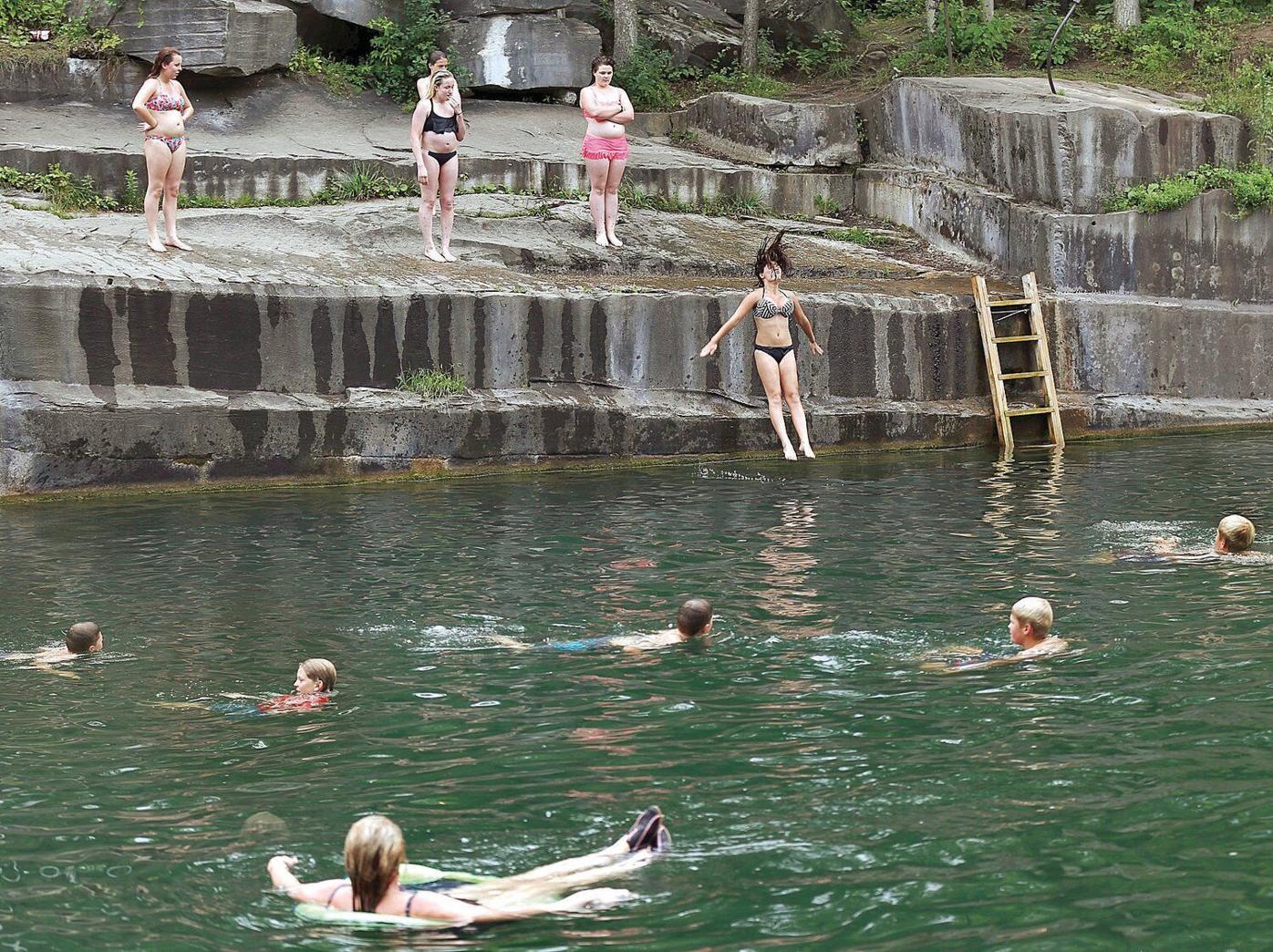 In this July 2015 file photo, swimmers fill the waters of the Dorset Quarry.

In this July 2015 file photo, swimmers fill the waters of the Dorset Quarry.

Dorset resident Ryan Downey acquired the quarry in October completing a deal that was years in the making.

Richard McDonough, who along with his wife tended to the site from when he bought the property in 1997 until he sold it to Downey in October, died in March, according to his obituary.

Downey praised his predecessor’s efforts and called him a “great friend.”

“Dick loved having the quarry,” Downey said. “It was something he took extreme pride in and had a real fondness for. He loved coming here and seeing the kids happy and seeing the smiles on their faces.”

Downey said McDonough took pride in keeping the quarry open to the public and worked for more than two decades to make it safer, cleaner and more family-friendly.

He also researched and collected the history of the quarry, filling shelves with documents and photos of the oldest marble quarry in the country.

The quarry area is two distinct parcels with the 3-acre Dorset Quarry and the adjacent Dorset Marble Park, which offers parking for a fee, a picnic area and toilets. There is a $15 per car fee for access to the Marble Park.

Access to the quarry remains free, Downey said. The fee is only for the parking area.

Downey said that if someone is dropped off, or walks in, they can access the quarry without charge, but they must register, sign a waiver and obtain a wristband.

To meet insurance requirements for the quarry, this season Downey is requiring visitors to register online and check a box stating that they have read and agree to a liability waiver. The requisite form is available at dorsetquarry.com and only needs to be completed once for the entire season.

Every person of all ages must register, which will produce a QR code that will need to be shown at the quarry’s gate to receive a wristband for entry.

Anybody caught on the quarry property without a wristband will be removed.

Downey said he has made landscaping changes in an effort to prevent people from entering the quarry without checking in with its attendant. If people are found to be at the quarry without a wristband, they will be asked to leave and escorted out by police, he said.

Visitors may notice a new iteration of the historic marker at the site, which was installed last October. Downey said the late McDonough worked with the town of Dorset to improve the sign’s paragraph describing the site’s history.

Downey said he is nearing the end of making various improvements to the area and that he “couldn’t be more excited” about the upcoming season.

“This is going to be the first year people will be able to enjoy everything that we’ve done down there without having to worry about machinery around and everything else,” he said.

Originally Downey had expected to acquire only the parking-lot parcel from the McDonoughs, with the nonprofit Vermont River Conservancy taking ownership of the quarry itself, which the McDonoughs also owned. But the nonprofit later determined that it did not have the capacity to manage the site, and the deal fell through last year.

“The River Conservancy held everything up,” Downey said, adding he was speaking only for himself and not the McDonoughs. Once the Conservancy finally realized how difficult it was to manage the quarry, how much money it would take and how much time it would take, it realized it wasn't the organization to manage it.

Downey said the effort was expensive to both himself and McDonough.

This past fall, when the negotiations ended, Steve Libby, executive director of the VRC, said that following months of negotiations the parties had been "unable to come to agreement on the goal of permanent, affordable, and adequate parking." The organization, backed by the Vermont Housing and Conservation Board, had sought to impose several restrictions on the quarry-adjacent parcel, including easements and a right of first refusal, that Downey viewed as excessive and/or incompatible with local zoning bylaws.

Downey began making improvements to the adjacent parking area in 2019, clearing the land and cleaning up the property from decades of abuse.

Downey said the amount of trash in the woods, including human excrement, tampons, needles and more required the land be scraped clean and hauled away with new topsoil brought in.

The property is now fenced to prevent people from leaving the property and trespassing onto neighbor’s land and large marble blocks have been placed to serve as barriers and decorations. There is only one access at the front gate and there are monitored cameras to catch offenders.

“You break the rules you’ll be asked to leave and not come back for the whole year,” Downey said. “I’m not asking a lot of people. Just follow some basic rules. They’re not hard rules to follow. Don’t act like a jerk.”

Downey had most of the marble blocks power washed this spring to return their brilliance.

No glass bottles are permitted at the quarry this year, Downey said, describing one new change to make the property safer.

The site will be following all coronavirus-related restrictions, Downey said. As of May 14, according to state guidance, outdoor events are limited to 900 unvaccinated people; if an event has no way to determine if visitors are vaccinated, it must assume all are unvaccinated.

The site doesn’t attract “much more than 300 (people) at a time,” according to Downey, which he said is about the capacity of the property.

Downey admits that local criticism has stung in recent years and wishes people could be more kind. He said most of the criticisms come from locals who lament the passing of “the old days,” when nobody knew about the quarry and it was just locals enjoying the cold water.

“I didn’t cause this problem,” Downey said, adding that he too was one of the locals enjoying the quarry before anybody else knew about it. He blamed a 2013 USA Today article that named the quarry as one of the top 12 swimming holes in the country.

“You don’t get that kind of notoriety and not have ramifications,” Downey said. “It blew this place up.”

On top of that, he said YouTube and the GoPro made the popularity of the quarry gain popularity.

He said McDonough worked to make it safer for locals and that’s what he’s continuing.

He said he and McDonough have only tried to keep up with what’s been dealt and he thinks they’ve been pretty successful.

“Nobody’s parking on Route 30 anymore,” Downey said. “Nobody is going to the bathroom in the woods anymore. There are people here every day cleaning this place up.”

Downey, who has served Dorset as the dog warden for eight years and as a Selectman, also served in the armed forces, and said he believes in giving back to his community.

Quarry parking for police, fire and rescue personnel as well as veterans and Dorset residents is free.

“I just wish my community was a little more accepting,” Downey said. “I’m really discouraged by how nasty people can be. This has been done with nothing but good intentions. I believe it’s improved this local area and I get nothing but flack from locals.”

He offered those who complain a chance to get to know him rather than read about him on Facebook.

The quarry has been open on occasion to get ready for the season, which kicks off this weekend. It’s expected to be open 9 a.m. to dusk, Memorial Day through Labor Day.

(This article was edited May 27, 2021, to better explain the negotiations with the Vermont River Conservancy.)