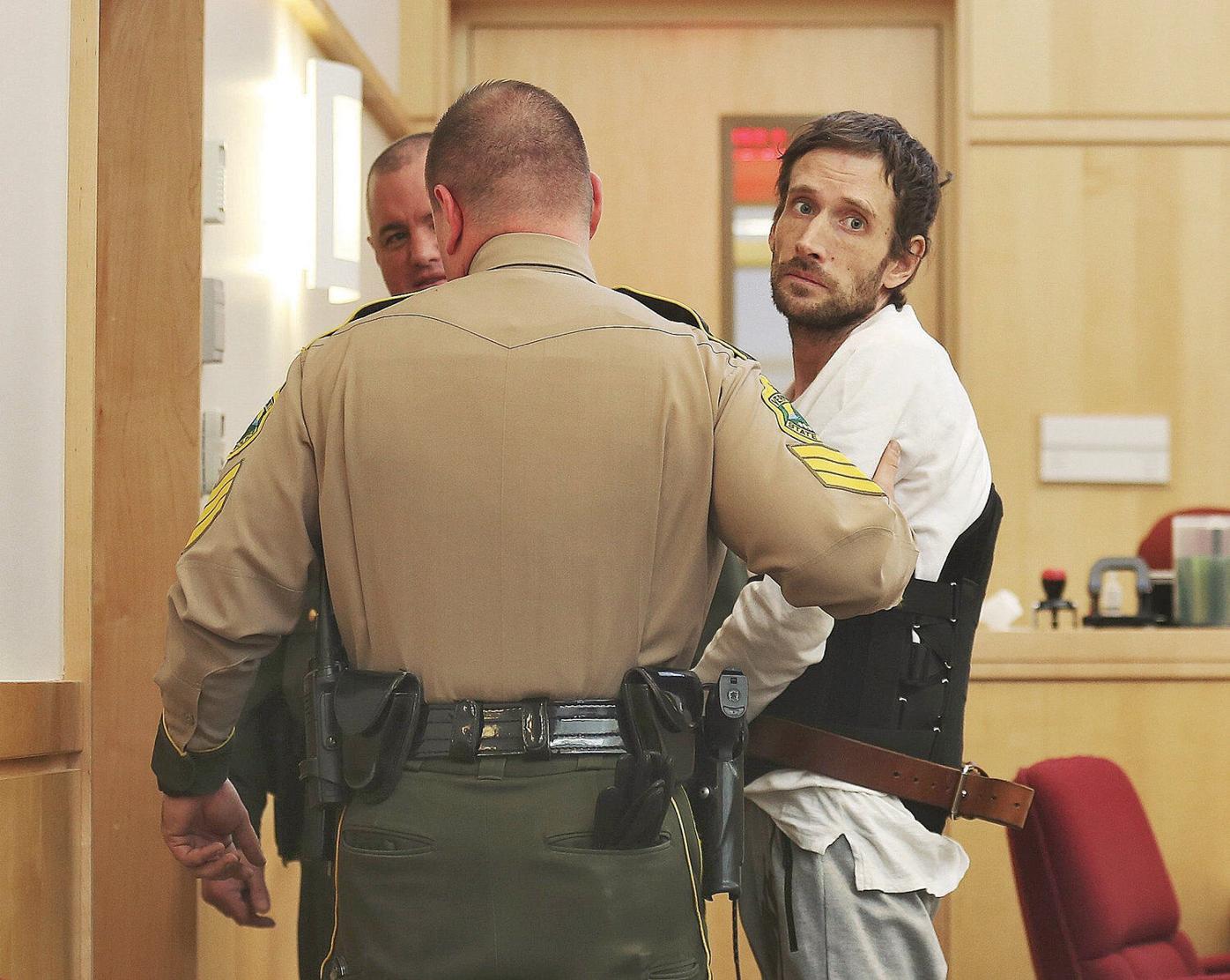 Matthew Novick is taken back into custody after pleading not guilty to his felony charges at the Bennington Superior Court in January of 2019. 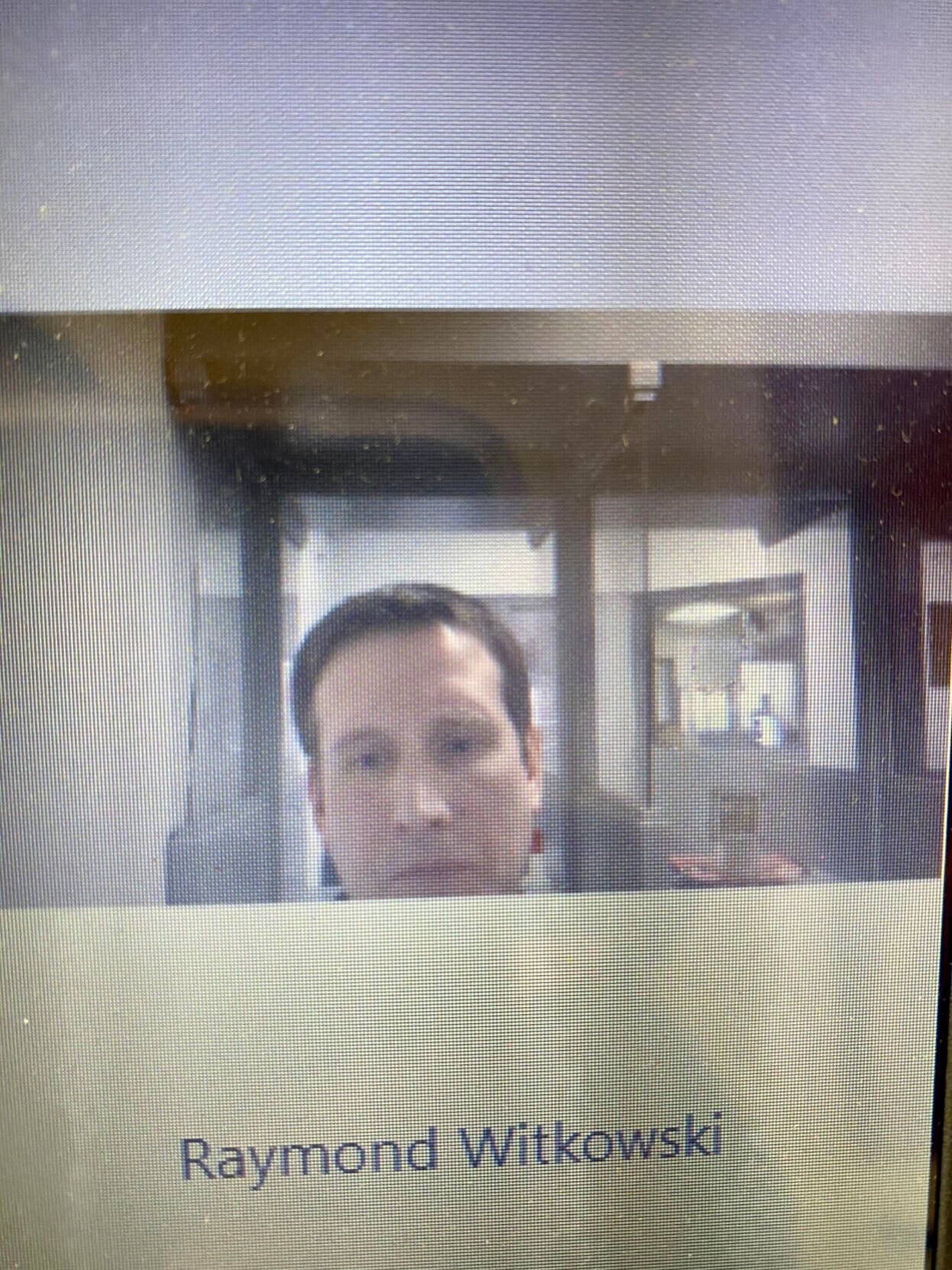 Matthew Novick, 42, appeared at his sentencing hearing on Tuesday through a video link from the Marble Valley Correctional Facility, where he has been detained since January of 2019.

Matthew Novick is taken back into custody after pleading not guilty to his felony charges at the Bennington Superior Court in January of 2019.

Matthew Novick, 42, appeared at his sentencing hearing on Tuesday through a video link from the Marble Valley Correctional Facility, where he has been detained since January of 2019.

ARLINGTON — An Arlington man who shot at state police while experiencing a mental health crisis was sentenced Tuesday to two years of jail time served and 10 years of probation.

The man, Matthew Novick, 42, was sentenced shortly after he pleaded no contest to a charge of aggravated assault with a weapon for the January 2019 shooting incident.

Novick’s other charge, attempted first-degree murder, was dismissed under a plea deal with the Bennington County State’s Attorney’s Office – an agreement to which a state trooper objected.

“This is more than a disappointment,” Trooper Raymond Witkowski told the court before Novick’s sentence was pronounced Tuesday morning. “This is a slap in the face to me, not only as a victim but as a law enforcement professional who dedicated his life to fair and equal pursuit of justice.”

The trooper asked Superior Judge Cortland Corsones for a 15-year prison term, the maximum penalty for aggravated assault with a weapon.

“Anything less than the maximum in this case is a travesty,” Witkowski said during the remote hearing. “I ask you to restore my faith in the system, Your Honor, because currently, I cannot tell victims or witnesses with a straight face that the system will take care of them, will fight for justice for them.”

Witkowski had been among two troopers whom Novick had fired at outside his house in the wee hours of Jan. 9, 2019. Novick had fired at least four shots with a rifle. Police had gone to his home at 535 Red Mountain Road after Novick’s mom called 911 to report that he was having a psychotic breakdown.

Witkowski and Trooper Shawn Sommers had taken cover behind Witkowski’s cruiser, which was later found to have multiple bullet holes, according to earlier reports. The troopers returned fire, with Witkowski hitting Novick in the abdomen.

When the shooting started, police decided to evacuate nearby residents. They included the family of state police Sgt. Todd Wilkins, who lived across the road from Novick.

Wilkins, in a letter read by a victim advocate on Tuesday, told the court he initially sought cover for his wife and children in their basement. But when he went out and learned that Novick was armed with a “high-caliber rifle capable of penetrating walls,” he decided to move his family to his parent-in-laws’ nearby apartment.

“The one place in the world a child should feel most safe is their home,” Wilkins said, “but for my family that was fractured.” Wilkins, who’d tried to speak with Novick during the incident, said he held no ill will toward the man and hopes Novick would find the help he needs.

Trooper Sommers chose not to speak at the hearing, but reportedly said earlier that he thought he was going to die during the incident.

The prosecutor said the plea deal was the best resolution the state could find given the result of Novick’s mental health evaluation. If the state had gone to trial, it risked getting a verdict of not guilty based on insanity, said Deputy State’s Attorney Alex Burke.

Burke acknowledged Witkowski’s frustration with the system, saying it is “completely valid.”

Novick and the state agreed on a jail sentence of time he has already served, but Novick’s attorney had argued for six years of probation. Judge Corsones granted the state’s request for the 10-year probation, citing the need for punishment, rehabilitation as well as Novick’s long-term monitoring.

Defense attorney Chris Montgomery said Novick woke up at Albany Medical Center (N.Y.) with no memory of the shooting incident, which made a no-contest plea appropriate in the case.

He said Novick has no criminal history, but rather showed a spiraling decline in his clinical depression and social anxiety disorders. These were exacerbated by Novick’s suspected self-medication, his lawyer said.

Novick, who appeared via video link from the Marble Valley Correctional Facility, apologized to his family, neighbors and the state police.

“I’m sorry this happened,” he said. “I’m grateful to the state for giving me a chance. I’m not gonna waste it. I’m gonna make sure that I’m never in a situation where anything like this can happen again.”

During a search of Novick’s house after the shooting incident, state police seized 61 firearms, including at least one assault weapon. Novick’s mom had described him to investigators as an avid gun collector. Because of his felony conviction, he will never be allowed to owned firearms again, the state said.

Novick has been detained since Jan. 22, 2019, after he got out of a coma and recovered at the Albany hospital. It’s not clear when he will start his probationary sentence. As of Tuesday evening, his name still appeared on the corrections department’s inmate list online.

Witkowski, who’d shot Novick multiple times, was also credited for saving his life through first-aid. “But for the quick actions of the trooper, we frankly would not have been here today,” the prosecutor said.