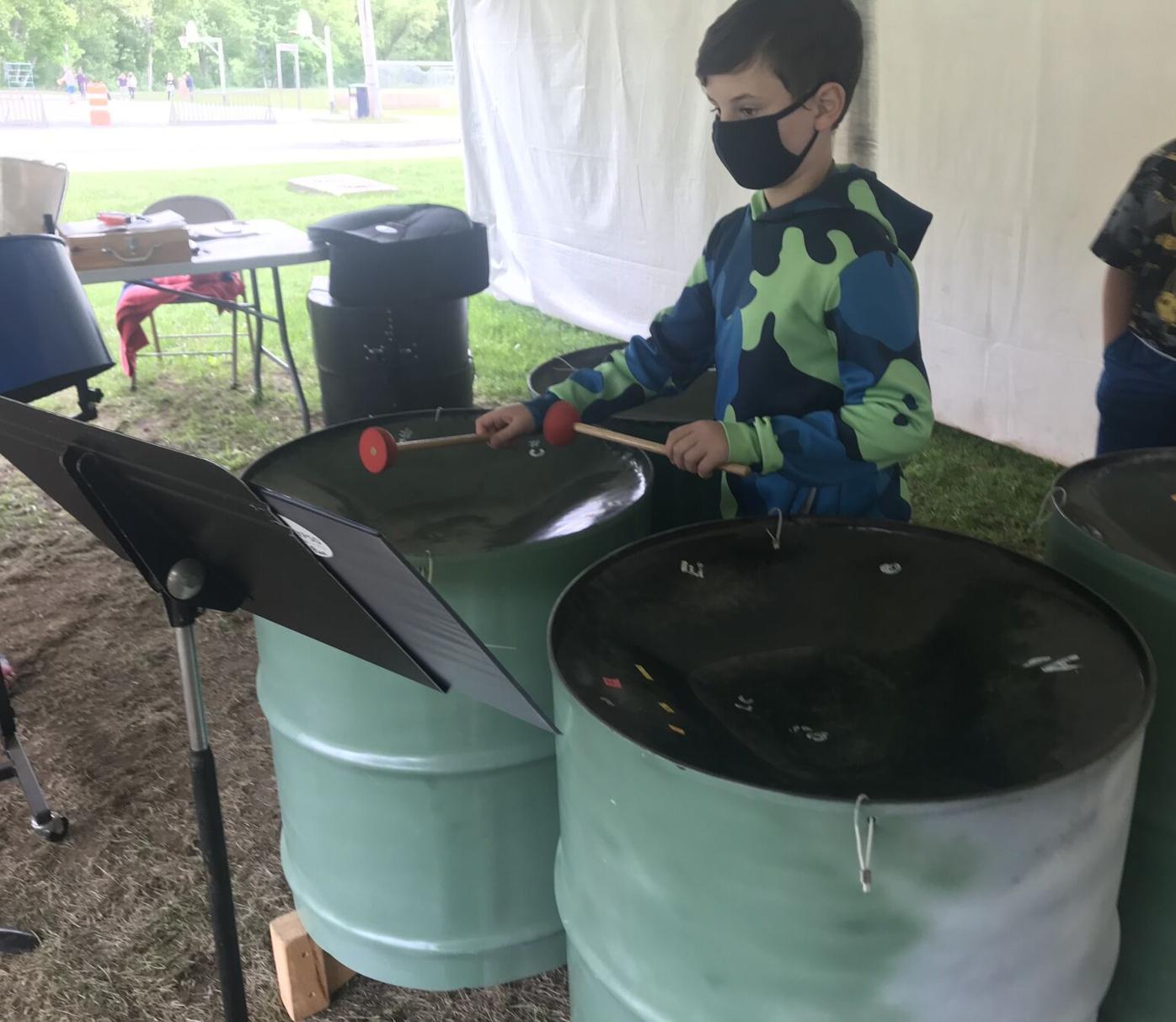 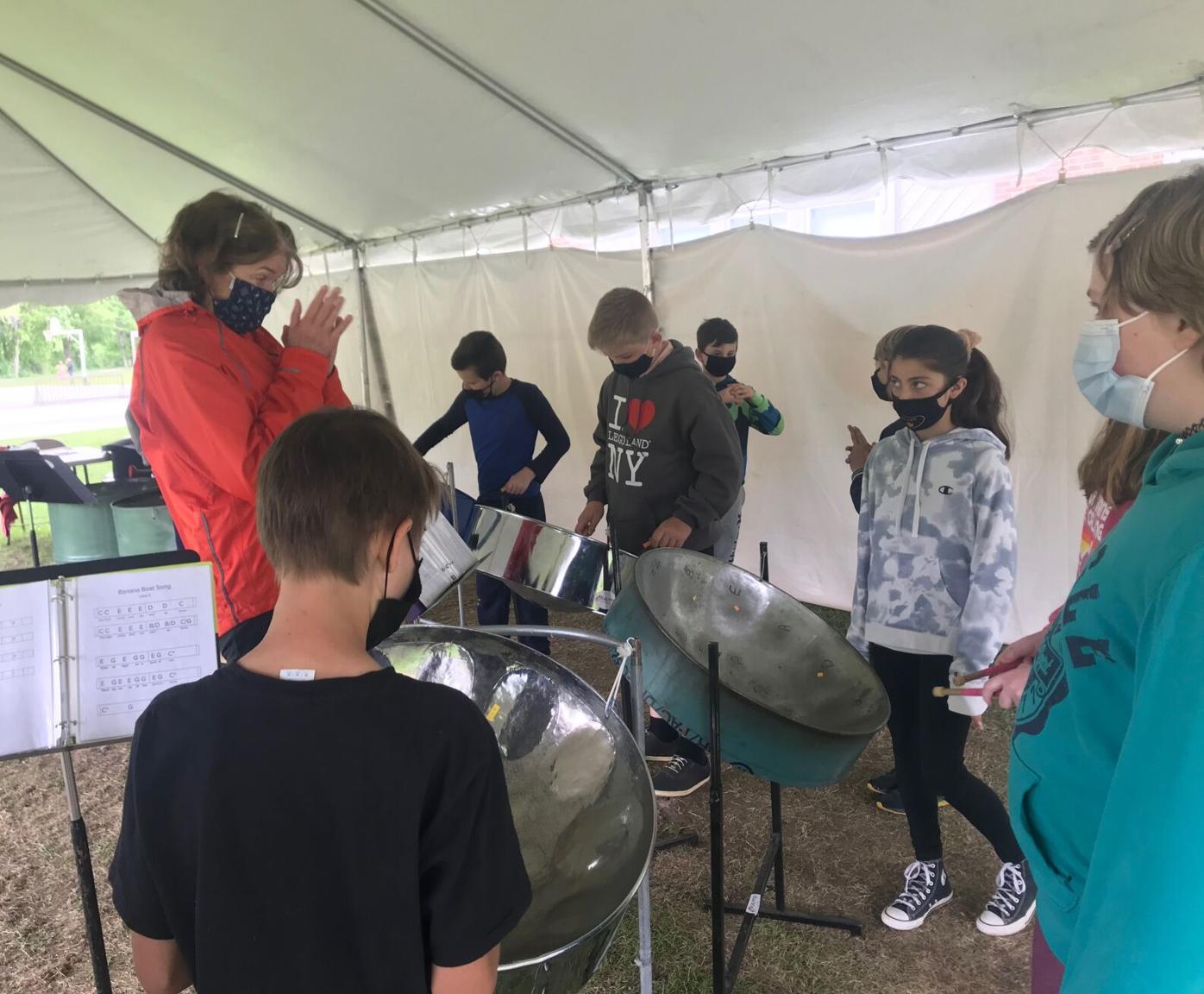 Calypso Connections Director Jen Cohen, delights at the performance of her fifth-grade steel drummers from MEMS.

Calypso Connections Director Jen Cohen, delights at the performance of her fifth-grade steel drummers from MEMS.

MANCHESTER — The grounds of Manchester Elementary Middle School are alive with the sound of music.

“It just floats in through the window,” said school secretary Paula Matteson. “It brings a smile to your face all day long.”

What Matteson hears is the rhythmic sound of MEMS students playing steel drums and singing along with the music, under the direction of Jen Cohen, director of Calypso Connections in Rutland.

For two weeks in late May, Cohen, an educator also classically trained in piano and violin, conducted steel drumming classes for all MEMS students during the school’s Artist in Residence program.

“As we end this challenging year, we looked for opportunities to allow the students to collaborate and celebrate,” says MEMS Co-Principal Debra Fishwick. “I know Jen from when we worked together at Mill River Schools and I’ve witnessed her passion for using steel drumming to build community and promote wellness. It’s just what we needed at this time.”

To work her musical magic, Cohen set up a dozen steel drums under a tent in the front yard of the school.

“I was a little concerned that some of my students might be wary about participating, but the drumming was easy to pick up,” said fifth-grade teacher Tracy Hughes. “Then when you add in the singing and dancing, there was something for everyone.”

The steel drum was invented in the Caribbean Islands of Trinidad and Tobago and is believed to be the only acoustic instrument created in the 20th Century. The islanders discovered that discarded oil drums could be molded into a musical device that could play the basic 12 notes of western music.

“With that range you can play anything from a Bach Invention to an Island folk tune, and all songs in between,” Cohen said.

Body language is an excellent indicator of unspoken feelings, and it spoke volumes about what the kids thought of playing the steel drum: The students listened, laughed and embraced all aspects of their musical training. They focused on their drumming and encouraged one another, as they quickly picked up the notes.

For those not drumming, they danced and sang Caribbean classics, including: “Four White Horses,” “Water Come a Me Eye,” and “Turn the World Around,” a folk song made famous by Harry Belafonte.

One student could have been talking for all when he declared, “Metal drums just make better noises!”

Cohen, who holds a master’s degree in education from the University of Vermont, was a music teacher at Mill River when she learned to play steel drums in a summer program at Villanova University. She immediately saw the power of steel drums to build community.

She founded Calypso Connections to spread the sound.

“Give people a chance to tap on some pans together, and you are well on your way to creating a positive, high-commitment culture,” Cohen said. “Participants share laughs, feel engaged and experience the joy of learning something new together.”

That is Cohen’s mission at Calypso Connections and she delivered on that promise with her students at MEMS.