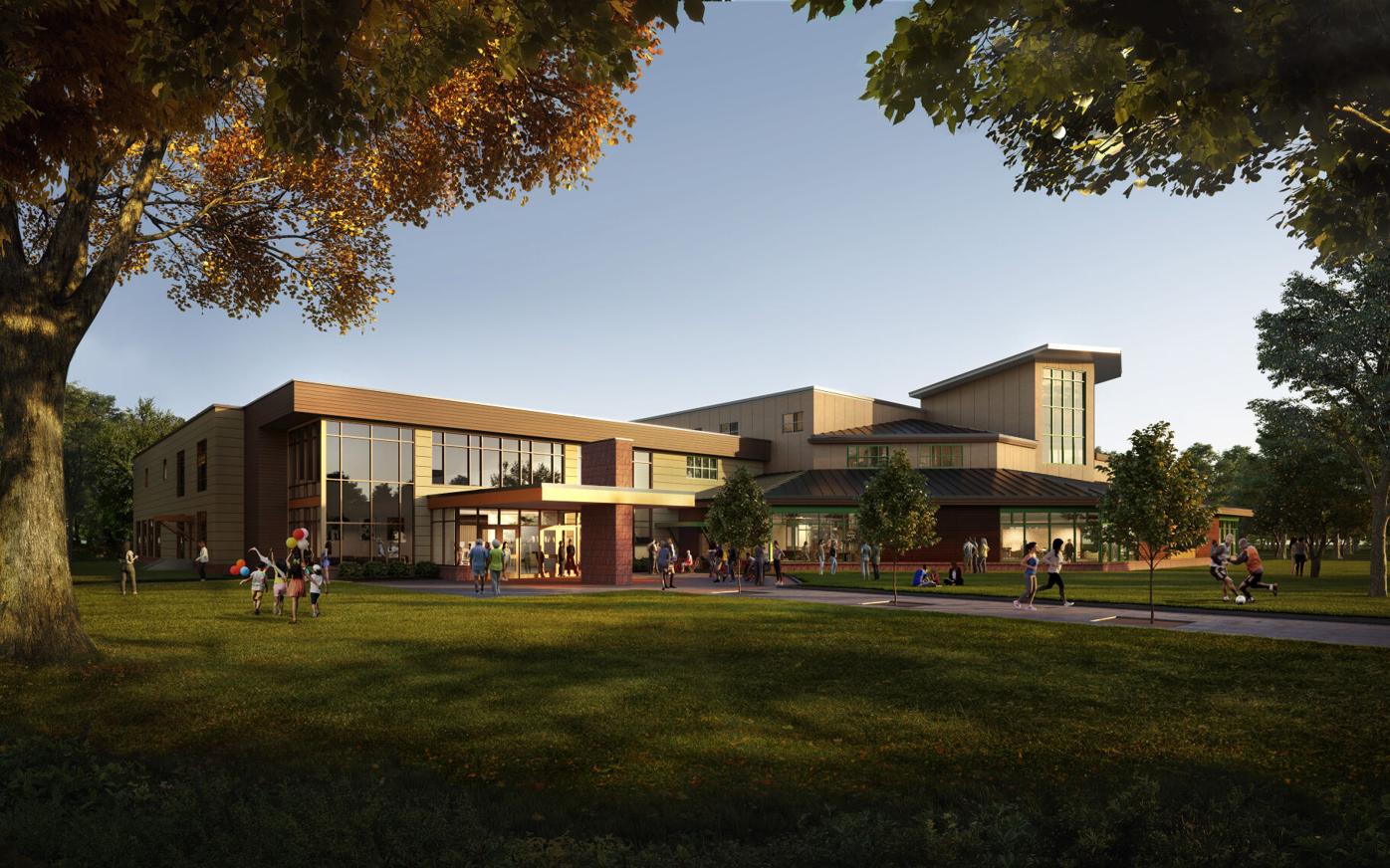 A $13.25 million, 67,000-square-foot Northshire Community Field House has been proposed for Dana L. Thompson Memorial Park, with a 200-meter indoor track, multipurpose athletic courts, a 45-foot climbing tower and a 3,000- square-foot fitness center that can be used year-round by residents from across the region. 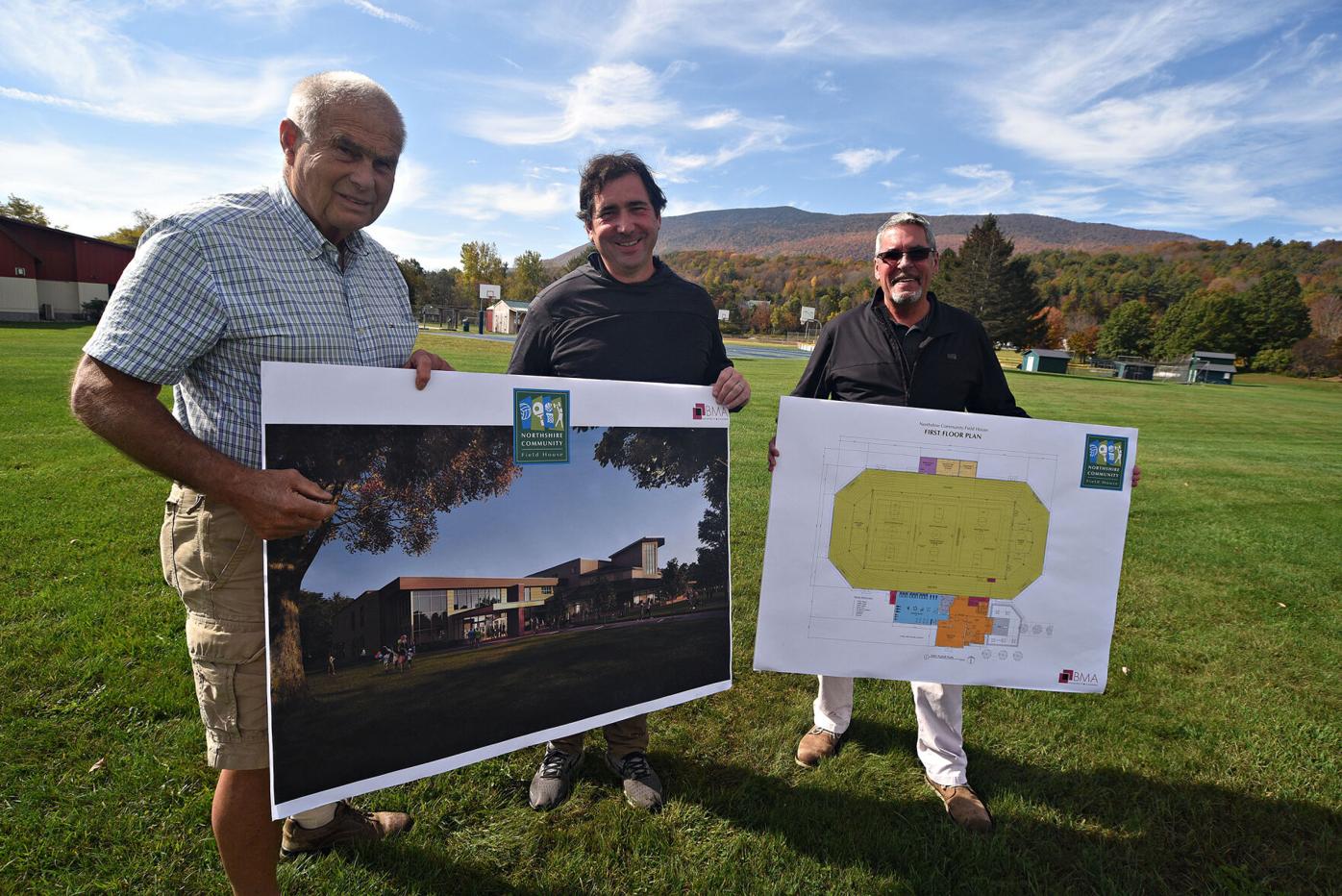 From left, Bill Drunsic, Manchester Town Manager John O'Keefe, and architect Kirk Moore pose on the field in Manchester with the plans for a $13.25 million field house on Tuesday. 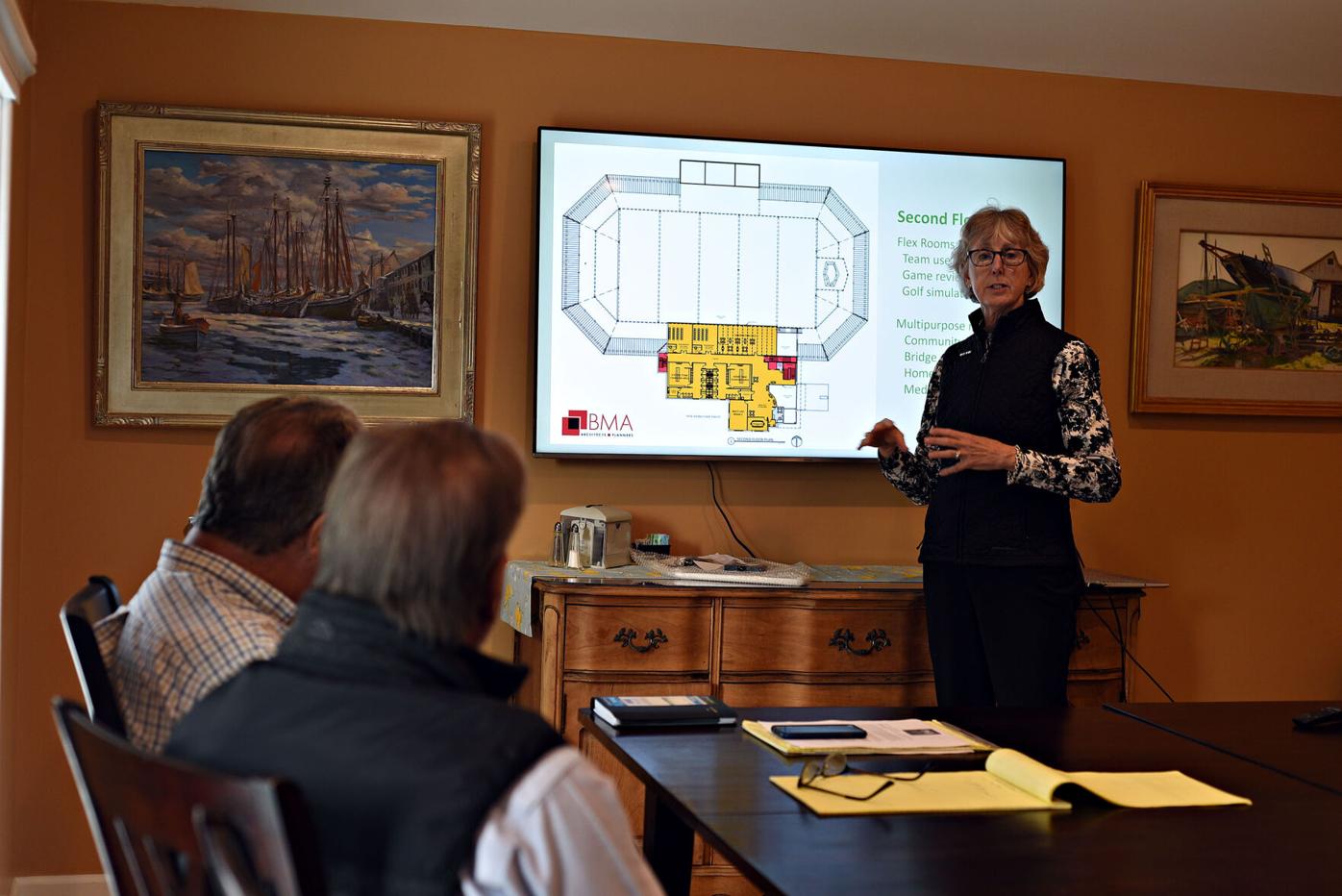 Cynthia Gubb, consultant with Gubb & Bongartz Nonprofit Consulting, discusses the plans for a new field house in Manchester, during the announcement on Tuesday morning.

A $13.25 million, 67,000-square-foot Northshire Community Field House has been proposed for Dana L. Thompson Memorial Park, with a 200-meter indoor track, multipurpose athletic courts, a 45-foot climbing tower and a 3,000- square-foot fitness center that can be used year-round by residents from across the region.

From left, Bill Drunsic, Manchester Town Manager John O'Keefe, and architect Kirk Moore pose on the field in Manchester with the plans for a $13.25 million field house on Tuesday.

Cynthia Gubb, consultant with Gubb & Bongartz Nonprofit Consulting, discusses the plans for a new field house in Manchester, during the announcement on Tuesday morning.

MANCHESTER — A 67,000-square-foot Northshire Community Field House has been proposed for Dana L. Thompson Memorial Park, with a 200-meter indoor track, multipurpose athletic courts, a 45-foot climbing tower and a 3,000- square-foot fitness center that can be used year-round by residents from across the region.

The $13.25 million project would be funded by private donations — including $3 million from the Drunsic family’s Right Track Foundation — and about $5 million in one-time taxpayer contributions from 11 area towns, including Manchester. Each contributing town would have one vote on a nonprofit board, which would hire an executive director to run the facility and other recreation programs at the park.

If all goes according to plan, groundbreaking would be in the spring, with completion in about 18 months.

An open house and launch party for the project is scheduled for Oct. 23 at the Park House, which would be next to the new building. The footprint of the new building will be staked out with information and artist renderings of the proposal. Food, drinks, ice cream and activities for kids will be available.

The field house would be available for public all-weather use for athletics, and indoor social and recreational programming, as well as for hosting sports tournaments year-round — a tourism market niche Manchester has been cultivating. The regulation 200-meter indoor track would allow Burr and Burton Academy and other regional high schools to practice and compete closer to home. The 45-foot climbing tower would be the tallest in Vermont.

Former Burr and Burton Academy development director Cynthia Gubb and former Hildene president and BBA Board of Trustees Chairman Seth Bongartz, who have been working in partnership as nonprofit consultants, helped assemble the plan. They joined Bill Drunsic, whose foundation has provided start-up “soft costs,” including the architectural design and renderings by Kirk Moore of BMA Architects and Planners, Town Manager John O’Keefe, and Manchester Select Board members Greg Cutler and Heidi Chamberlain at an information session held Tuesday.

Sessions in area towns are being planned, too, proponents said.

“No one town could do this on its own. But we can do this together,” Bongartz said.

“This facility will serve a multi-town footprint. It’s not just about Manchester, it’s about bringing in other towns so that this truly is a regional facility that can serve the towns in this area,” she said. “There’s no place like this in Southern Vermont. There’s nothing like this.”

Proponents emphasized the field house would be a community asset in Manchester, rather than a Manchester facility that also welcomed surrounding residents.

“If a town is in, all residents are treated exactly the same,” he said.

The Thompson Memorial Park location, Bongartz and Manchester Town Manager John O’Keefe said, makes sense as a central access point for area towns, as well as for its proximity to downtown Manchester Center.

For years, Northshire residents have pointed to a need for indoor recreation space and social centers for teenagers and senior citizens, proponents said.

Rather than address one need, “we decided to go bold,” he said.

“We’re in a fortunate position where my businesses have been good to me,” Drunsic said. “So I guess this is a message, that if you want a viable community, residents have to turn around and invest. ... I’m willing to step up to the plate and do my small part, and ask the rest of the residents if they feel the same way.”

The multipurpose courts would feature three basketball courts and a dedicated pickleball court. That space could also be used for volleyball, indoor soccer and lacrosse practice space, and baseball batting cages for local school teams when spring proves elusive. The fitness center would be equipped with the basics, such as elliptical, step machines and basic weights, Gubb said, and would not be intended to compete with area fitness gyms.

The programming options range from after-school athletics to senior bone-builders workouts, workout classes and sports clinics of all manner, and an expansion of the winter Junior Instructional Snowsports Program program to include rock climbing for kids who aren’t keen on ice skating or skiing.

“It’s going to be busy and vibrant all the time,” O’Keefe predicted.

One payment, use for a lifetime

In return for providing a one-time minimum contribution, which was determined using a formula accounting for population, grand list valuation and distance from Manchester, participating towns would enjoy resident user rates, a fraction of the market rate for fitness gyms, in perpetuity.

Proponents are hoping to get ballot questions for one-time contributions on next spring’s Town Meeting warnings for 11 area towns: Arlington, Danby, Dorset, Landgrove, Londonderry, Manchester, Mount Tabor, Peru, Sunderland, Weston and Winhall. Interest is welcome from other towns that might want to take part.

When Gubb and Bongartz consulted with bond experts last month, the interest rate sat at 2.1 percent, they said. But towns would not be required to pay for their contributions via bonding, Bongartz said.

The funding formula would generate more than $5 million, in addition to the $3 million put up by the Right Track Foundation. The remainder would come from fundraising and donations.

Manchester would contribute the land. “That’s a huge factor,” Bongartz said. The town would also handle personnel and back-office functions for the field house.

Yearly membership fees for residents would start at $125 for a single person, $200 for a couple, $250 for a family, and $20 for middle school students and $50 for high schoolers not part of a family plan. Nonresidents would pay more per year: $370 for single memberships, $500 per couple and $750 per family. Additionally, residents would receive priority consideration for memberships and for reservation times for amenities.

The Right Track Foundation has also agreed to cover any shortfalls in the operating budget for five years. But the initial budgeting, Bongartz and Gubb said, shows projected costs of $741,000 and revenue of $875,000. Up to $100,000 of annual revenue would be set aside for capital needs, overseen by the nonprofit Northshire Community Fund.

The building is designed to be energy efficient, with heat pumps and solar panels providing heat and electricity. While many multipurpose facilities tend to look like aircraft hangars, the building is designed with multiple windows to let in natural light. The second floor, which would include meeting rooms, locker rooms and an observation deck, would allow for a more appealing roofline, proponents said.

While proponents considered an indoor swimming pool as part of the project, the regular staffing and maintenance costs of running a pool proved prohibitive, stakeholders explained. Site visits to municipal pools in White River Junction and Springfield bore that out, they said.

“We looked at that pretty hard early on, and the sustainability aspect of an indoor pool is extremely challenging,” Moore said. And O’Keefe noted that the town’s six-lane outdoor pool, also at Thompson Memorial Park, costs $100,000 to run — but brings in $50,000 in revenue, and requires constant lifeguard staffing.