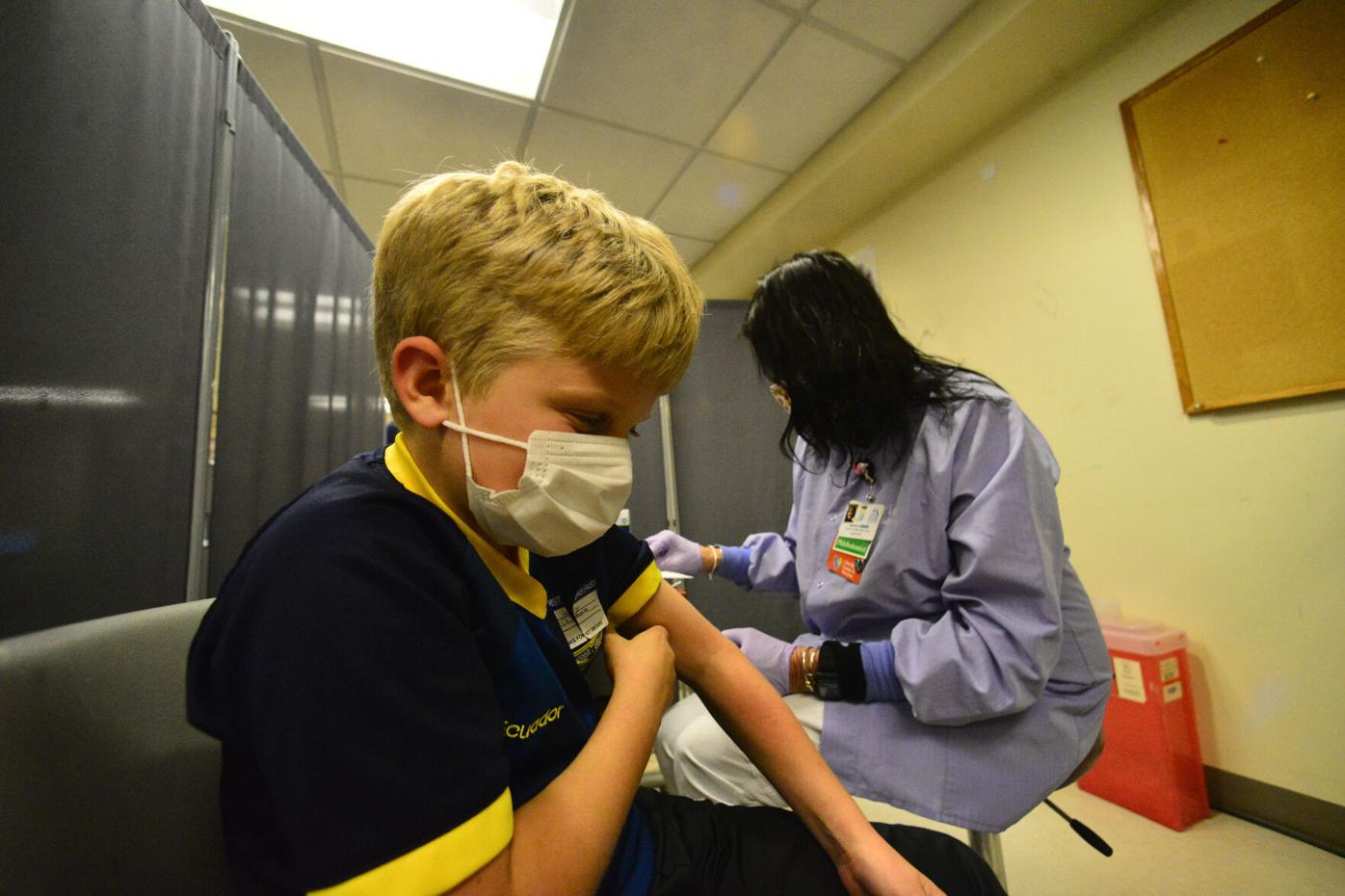 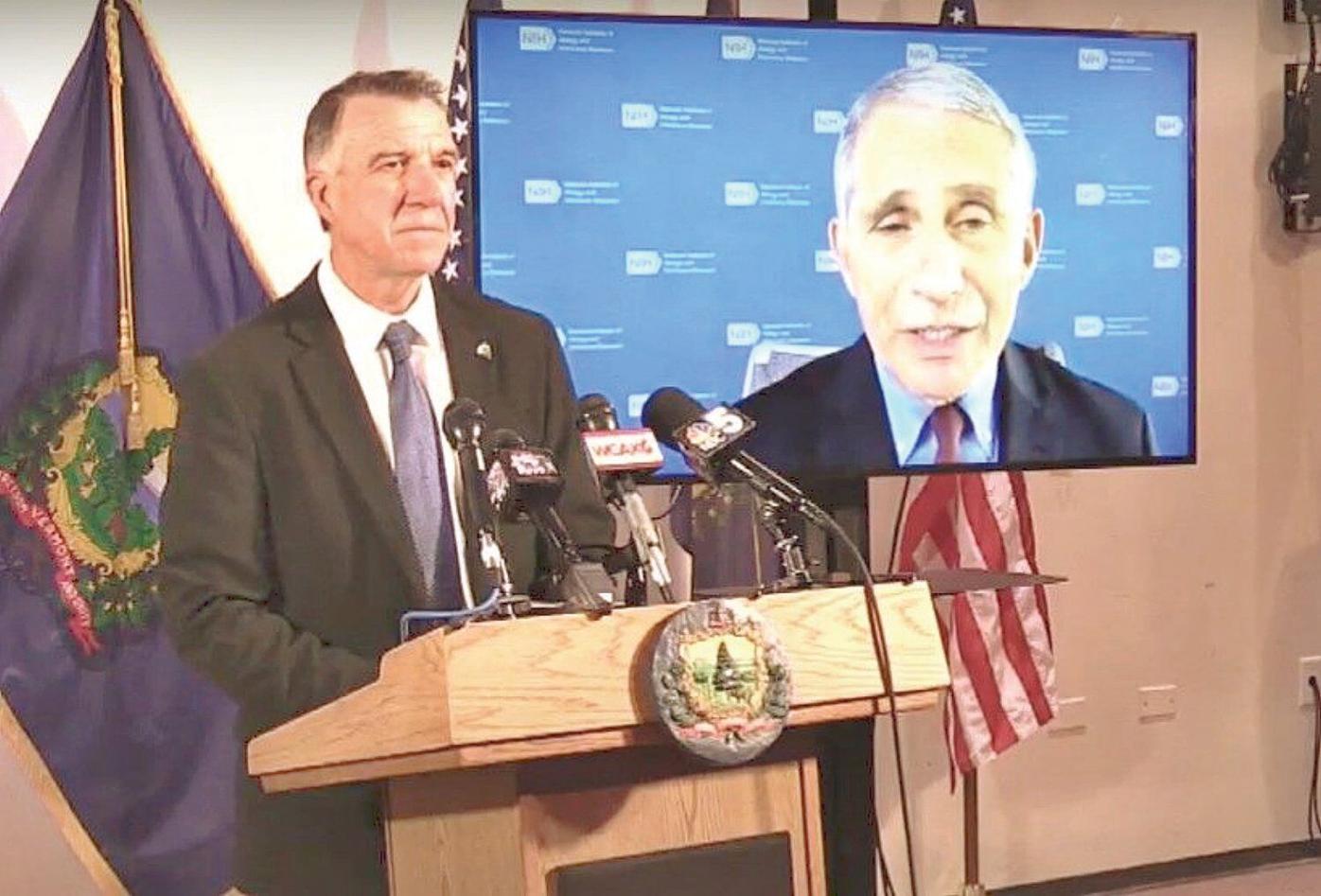 Dr. Anthony Fauci, director of the National Institute of Allergy and Infectious Diseases, speaks remotely during a press conference as Gov. Phil Scott listens in September.

Dr. Anthony Fauci, director of the National Institute of Allergy and Infectious Diseases, speaks remotely during a press conference as Gov. Phil Scott listens in September.

MONTPELIER — Vermont is leading the country in several COVID-19 vaccination benchmarks from the Centers for Disease Control and Prevention, including the percentage of population fully vaccinated overall, and fully vaccinated as newly eligible 5- to 11-year-olds and for most residents who have received booster shots.

Asked at his weekly news conference what have been the most effective strategies for his administration, Gov. Phil Scott credited “the people of Vermont and their willingness to accept the vaccine and some of the guidelines and advice we’re giving them.”

“Without their willingness, we wouldn’t have been able to be as successful as we’ve been,” he said.

Having experts communicating with the public and participating in news conferences “has been advantageous,” Scott said. They have given “honest news,” whether it’s good or bad, he added.

According to the CDC, about 76.1 percent of eligible Vermonters are vaccinated against the coronavirus.

Mike Smith, secretary of the Agency of Human Services, estimated just more than 40 percent of the recently eligible 5- to 11-year-old children in Vermont have started the process of vaccination or made an appointment. Scott said, knowing it would be a more difficult age group to reach, state officials asked pediatricians to talk with families about the importance of the vaccine.

“I think some [families] are just taking a little bit of time, waiting to see,” he said. “In the early stages, a number of kids have received their vaccinations. I think we’ll see it will give them more comfort once they see the results of that over two, three weeks, and we’ll see more vaccinations over the next few weeks.”

Smith counted nearly 152,600 Vermonters who have received boosters. He noted anyone 18 or older is eligible six months after receiving their second dose of the Pfizer or Moderna vaccines, or two months after getting a Johnson & Johnson shot.

“So please make an appointment,” he said.

Michael Pieciak, commissioner of the Department of Financial Regulation, said COVID-19 case counts increased by about 15 percent across the U.S. and 27 percent in New England in the last week. Vermont experienced a 4 percent increase over that period and a 20 percent increase in the last two weeks.

Testing has increased in the state by 16 percent in the last week, and the positivity rate decreased by 11 percent, Pieciak said. He noted Bennington County, Rutland County, and the Northeast Kingdom are seeing higher case counts than other areas.

Vermont is leading the nation in administering COVID-19 booster shots to adults 65 and older, Pieciak said.

The state is tracking 12 active outbreaks at long-term care facilities. Of the 181 COVID-19 cases in the facilities, 68 are at the Crescent Manor Nursing Home and Rehabilitation Center in Bennington.

Pieciak said many of the cases at long-term care facilities are among staff.