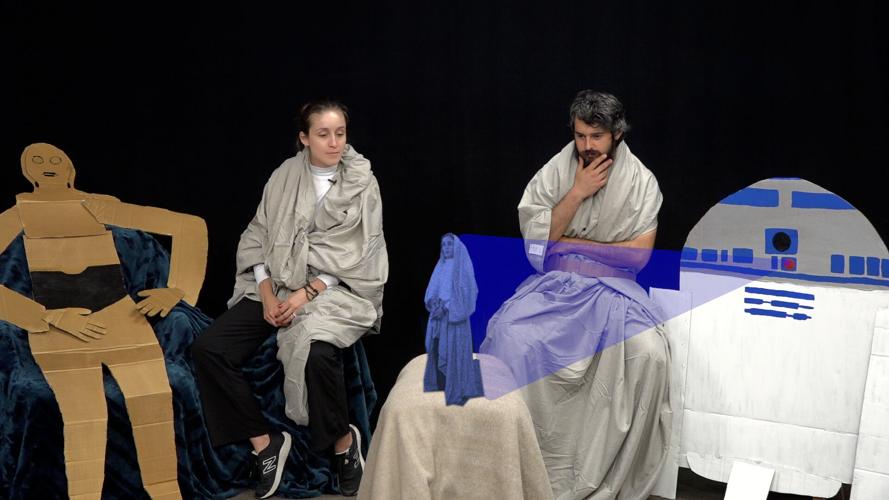 Cristina Perez, left, and David Morelos, of North Bennington, watch on as a hologram of Perez as Princess Leia plays during a scene from Crowdsourced Cinema VT's production of "Star Wars: A New Hope." The adaptation of the science fiction classic will be screened Sept. 30 at the Manchester Community Library. 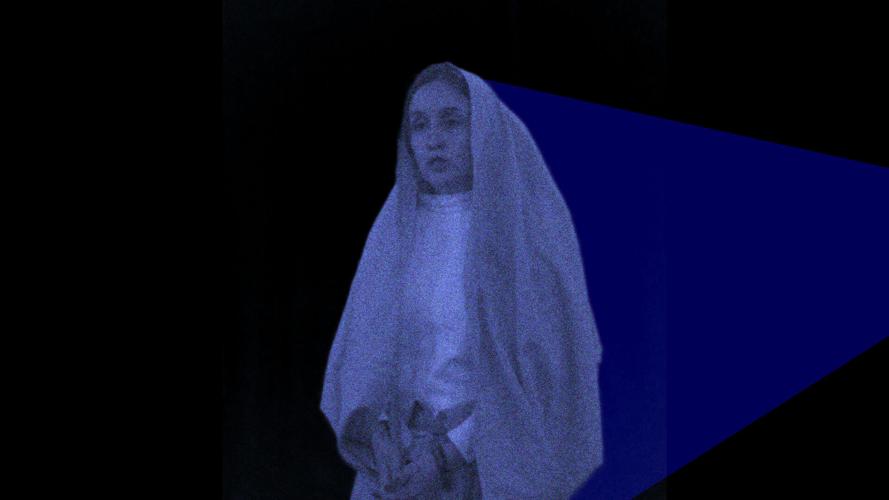 A close-up of Cristina Perez playing Princess Leia in a scene from Crowdsourced Cinema VT's production of "Star Wars: A New Hope," which will be screened Sept. 30 at Manchester Community Library. 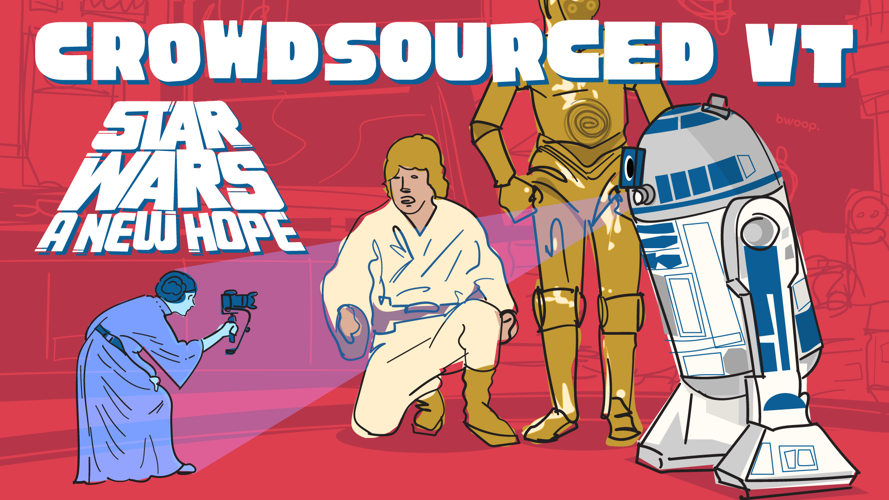 Cristina Perez, left, and David Morelos, of North Bennington, watch on as a hologram of Perez as Princess Leia plays during a scene from Crowdsourced Cinema VT's production of "Star Wars: A New Hope." The adaptation of the science fiction classic will be screened Sept. 30 at the Manchester Community Library.

A close-up of Cristina Perez playing Princess Leia in a scene from Crowdsourced Cinema VT's production of "Star Wars: A New Hope," which will be screened Sept. 30 at Manchester Community Library.

MANCHESTER — As a photographer, David Morelos of North Bennington is accustomed to being on the business side of the camera — not in front of the lens.

But when necessity dictated that Morelos take on the role of an aging Jedi knight confronted with the mission of a lifetime, he did what the heroes of “Star Wars: A New Hope” would have done, and took the job.

Fortunately for him, his wife, Cristina Perez Ayala, was willing to deliver the lines that launched the plotline of a science fiction classic into the galaxy: “Help me, Obi-Wan Kenobi. You’re my only hope.”

The couple is part of Crowdsourced Cinema VT’s production of “Star Wars: A New Hope,” produced by volunteers working with community access media centers across the state. Morelos is looking forward to attending the Manchester premiere of the movie Sept. 30 at the Manchester Community Library.

The library is planning a party for the occasion, and patrons are encouraged to indulge their inner sci-fi geek and attend wearing a “Star Wars” costume. The party starts at 5 p.m., followed by the screening at 6 p.m. Admission is free.

It didn’t require a Jedi mind trick for GNAT to coax Paige Vignola, the library’s assistant director of education and community engagement, into hosting the screening.

“When GNAT initially said they wanted to do that, I said we’re not doing a screening — we’re having a party,” she said.

“Star Wars” cookbooks are being consulted. Light saber duels are planned, as is a Death Star-shaped pinata.

“My favorite part is I’m going to steal some Nerf guns from my son and do stormtrooper target practice,” Vignola added. (Which, if you know the movies, means the object of that game will be to miss, badly and repeatedly.)

The organizers split the science fiction classic into scenes to be distributed across the state. Morelos was handed the scene in which Luke Skywalker and his odd couple droids deliver Princess Leia’s desperate plea to Kenobi in hologram form.

Like dueling Darth Vader or making the Kessel Run in 12 parsecs, taking on an iconic role played by Sir Alec Guinness was a challenge for Morelos, a photographer at Bennington College who has also done freelance work for GNAT-TV. He’s accustomed to working as a director, camera operator or audio technician — not as an actor.

But a casting call didn’t bring the response Morelos was expecting. So, with the gusto of a blaster-wielding space princess ordering her brave-but-outmatched rescuers into the garbage chute, he took on the role — and let cardboard cutouts play the role of Luke’s trusty droids.

“Acting is tough. It’s always a good exercise, [so you can] empathize with the actors,” Morelos said.

As for Ayala as Leia? “She’s great. She’s more natural than me,” Morelos said. “It’s always great to have the support of my wife, my family and my friends.”

GNAT Executive Director Tammie Reilly explained that Crowdsource Cinema VT got its start several years ago at a Northampton (Mass.) Open Media. As community media centers love to share good ideas, the concept made its way to Vermont, where members of the Vermont Access Network said, “Hey, we want to try that,” she said.

Crowdsourced Cinema VT is a statewide initiative produced by the Burlington-based Media Factory community media center in partnership with other media centers statewide. Brattleboro Community Television is also part of the challenge, which in the past has taken on films including “Jurassic Park” and “Castaway.”

Ross Ransom of Media Factory said the state’s community media centers adopted the model as a way of encouraging engagement during the COVID pandemic, as well as education in how to use video equipment. As many as 150 people work on each project, including musicians, he said.

“This all came together in a way that really engaged the community,” Ransom said. “We wanted to bring people together that weren’t seeing each other — and also get people out there into the field and start creating content.”

“It’s not about it being a professional project. It’s a learning experience first and foremost,” he said.