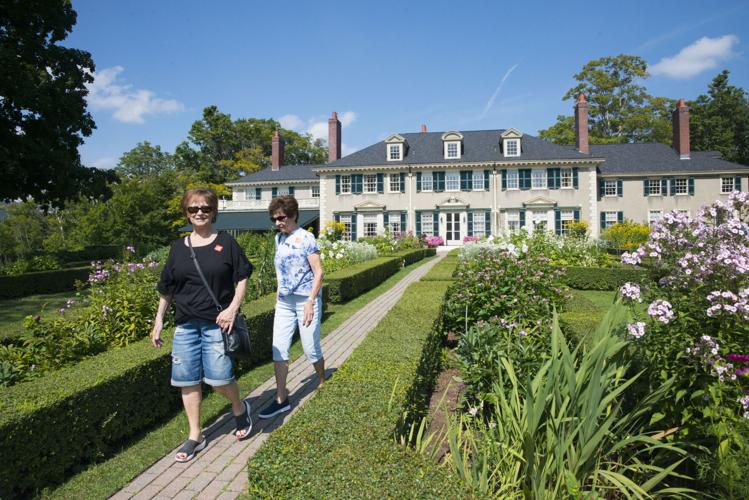 Visitors stroll through the formal garden at Hildene, The Lincoln Family Home in Manchester on Tuesday. 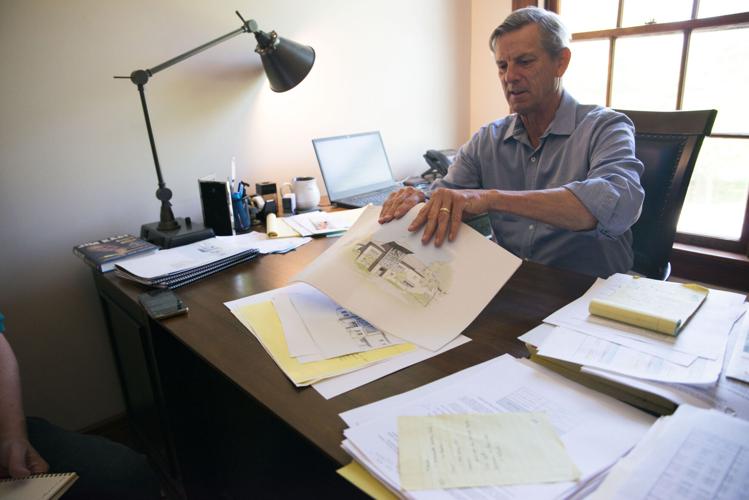 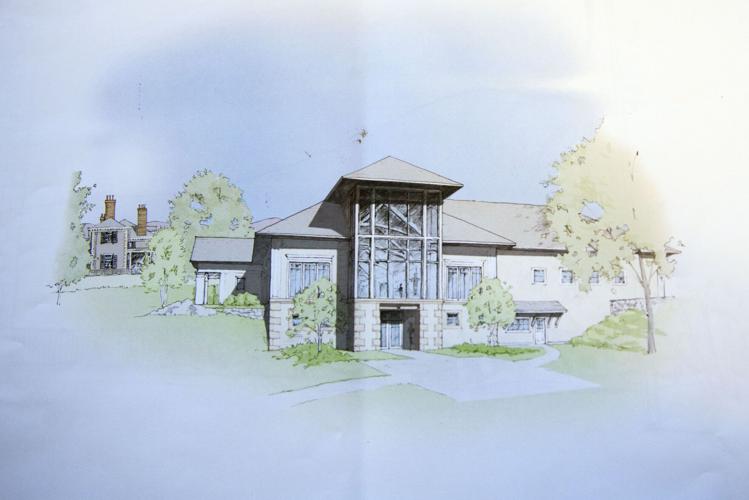 A rendering of Lincoln Hall, a proposed 14,000-square-foot multipurpose event space at Hildene.

The event tent at Hildene, The Lincoln Family Home. 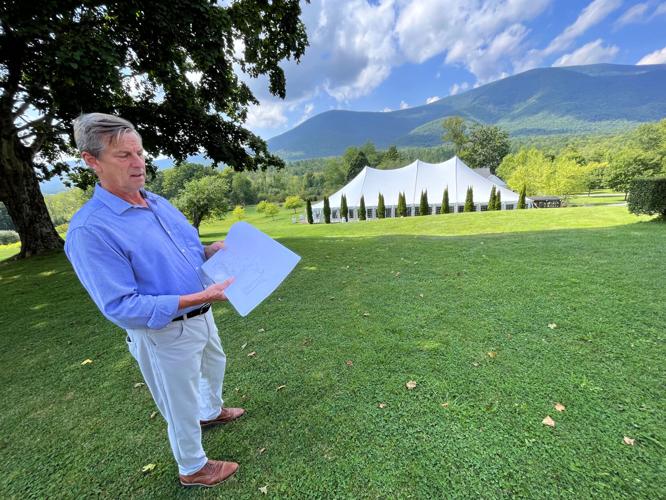 Brian Keefe, president of Hildene, The Lincoln Family Home, shows a rendering of a proposed 14,000-square-foot multipurpose event space would replace the museum's event tent and offer the opportunity to host more educational programming and events, including weddings.

Visitors stroll through the formal garden at Hildene, The Lincoln Family Home in Manchester on Tuesday.

A rendering of Lincoln Hall, a proposed 14,000-square-foot multipurpose event space at Hildene.

The event tent at Hildene, The Lincoln Family Home.

Brian Keefe, president of Hildene, The Lincoln Family Home, shows a rendering of a proposed 14,000-square-foot multipurpose event space would replace the museum's event tent and offer the opportunity to host more educational programming and events, including weddings.

MANCHESTER — Hildene, the Lincoln Family Home, is planning the most significant addition to the historic homestead and farm since Robert Todd Lincoln built the estate more than a century ago — a 14,000-square-foot, multilevel, multipurpose building that will host events and educational programs year-round.

Construction of the building, to be known as Lincoln Hall, is estimated at $5.7 million. It would replace a three-season tent where weddings and events have been held, and a 14-year-old building nearby. It will be situated to minimize its visibility from the 8,000-square-foot Georgian Revival mansion, which has been listed on the National Register of Historic Places since 1978.

It’s a significant step for one of the region’s most important historic and cultural attractions — the estate and farm built by Robert Todd Lincoln, the only child among President Abraham Lincoln and first lady Mary Todd Lincoln’s four children to survive to adulthood.

Hildene, with its motto of “Values into Action” reflecting its desire to educate current and future generations on the legacy of the 16th president, is confident the new asset will help further that goal. The building will help expand current education and programming offerings, enhance its wedding and event service, and develop innovative programs that reach a wider audience, President Brian Keefe and Director of Development Nan Bambara said.

In addition to educational and community events, the new building will give the historic estate food service capacity, which it presently lacks, as well as up-to-date high tech that will allow for remote video participation in educational programming, discussions and lectures.

“Primarily, this project is to provide a space where we can offer programming year-round related to our mission,” Keefe said. “Right now, we don’t have a gathering space that’s adequate.”

A fundraising gala, which has already sold out, will be held Sept. 9, and construction is scheduled to begin on Nov. 1. If all goes according to plan, the new building will be opened to the public in May 2024. According to Keefe and Bambara, fundraising for the project is two-thirds of the way to the goal.

The event center will make it possible for Hildene, a popular site for destination weddings over the years, to host receptions all year. At present, the tent hosts 36 weddings annually. That accounts for about $400,000 in revenue for the nonprofit’s $3 million operating budget, Keefe said.

Hildene welcomes 42,000 guests annually from all over the world and 3,500 students of all ages through visits and summer camps, including Burr and Burton Academy classes focused on sustainable agriculture, food systems and ethnobotany. It includes 12 miles of hiking trails, a goat dairy and cheesemaking facility, an 1832 schoolhouse, a 600-foot floating boardwalk and an animal barn and teaching greenhouse. It also houses a restored Pullman car, “Sunshine,” helping to tell the story of how African American porters manned the cars built by the company when it was the largest manufacturer in the world.

When Keefe arrived at Hildene in 2019, succeeding Seth Bongartz as president, “there was talk that about this need for the space,” Keefe said. “We have all kinds of great stories to tell related to history and preservation and animal science and regenerative agriculture and cheese making and beekeeping and school programs and any number of things.”

With the current lack of year-round space, “We just can’t tell that story,” he said.

One example of the tent’s limitations was how weather interrupted the museum’s annual essay contest, held in the spring. “We had 100 people in there, and then I was up there to speak, and the rain started coming,” Keefe said. ”We just had to stop and wait it out.”

As for weddings? “The tent is wonderful for weddings and such, but it’s only a limited season,” Keefe said. “Weddings are a revenue source for us. So if we’re able to do more weddings on the property, that helps our business case.”

The lack of food service at Hildene also affects the museum when visitors shorten their stay. Providing food will help visitors spend more time exploring everything the site has to offer, Keefe said.

“A lot of people get here, especially families, and then they find out, ‘Wow, you’ve got so much more than I thought,’ but the kids are hungry or they’re impatient. … And they say, ‘We’re going to go to town, and we’ll come back.’ And then they oftentimes don’t come back. This will keep them on our campus and help them be able to experience the full breadth of our programs.”

As a national historic site dedicated to the Lincoln family and its legacy, Hildene could offer a great deal more programming, connecting to the fascinating history of the 16th president, the times in which he lived, and the family’s effect on the world. A modern building wired with technology for the 21st century will help Hildene meet that mission, Bambara said.

Before the pandemic forced so much programming onto online platforms, Hildene didn’t have the ability to offer hybrid programs. But the success of a quarterly book group, with participants from Canada and California, helped the museum realize the potential in online programs.

“We realized if we build a tech-ready state of the art facility, we could possibly have a speaker on screen. Now, we don’t have to worry if they can’t make it from Montpelier in a snowstorm,” Bambara said. “We could get a world-renowned speaker to call in or Zoom in, and lead an history seminar. This whole tech-ready piece is not to be missed. We’re hoping to connect way beyond our borders.”

Lincoln Hall will be about halfway down the hill between the mansion and the visitors center, which will remain in the estate’s former carriage barn. The roofline of the hall will be lower than the peaks of the tent, and it will be oriented east to west rather than north to south (as the tent is now) to further minimize the exposure. From its main function room, the new building will provide a signature view of Mount Equinox.

According to the Natural Resources Board, the body that administers Act 250, the project is “pending, awaiting information.”

A proposed permit, sent to Hildene in June, stipulates that an Act 250 permit for the project is contingent upon the District 8 administrator signing off on a number of permits, including stormwater discharge, water and wastewater, a construction waste reduction plan and a comment letter from the Vermont Division for Historic Preservation.

“We’re down to a final punch list that includes formal approval of the stormwater discharge permit,” Keefe said of the Act 250 process. “[The Agency of Natural Resources’] requests and suggestions have been reasonable, and we’re doing our best to get them the information in a timely and responsive manner. It helps that we share the same desire for outcomes that are respectful of the environment, as well as of the historic nature of this property.”

Keefe said Hildene has been working with Efficiency Vermont to meet energy efficiency requirements. The new building’s climate systems will rely on heat pumps, and Hildene already purchases its power from a solar-powered supplier, Keefe said.

As for the conversations with the Vermont Division for Historic Preservation: “They gave us a lot of ideas, really,” Keefe said. “They were concerned about the impact of construction on the existing buildings — there’s a lot of ledge out there, so there will be some blasting involved. So we’ll be very careful that we don’t jeopardize any of the other buildings.”

The building, designed by Manchester architect Ramsay Gourd, takes design cues from the mansion’s architecture, but doesn’t seek to duplicate it.

When the pandemic pressed pause on life in spring of 2020, “we took a look around to see what we liked about the existing design and whether we can improve upon it,” Keefe said. The trustees authorized Keefe to invite three firms to submit conceptual plans, and Gourd’s plan was the choice.

Robert Todd Lincoln (1843-1926) built Hildene in 1903 as a summer home for his own family. He had visited Manchester Village in the summer of 1864 along with his mother and his younger brother, Tad, staying at the Equinox House. After the Civil War, he became an attorney, served as secretary of war under Presidents James Garfield and Chester Arthur, and as ambassador to the United Kingdom under President Benjamin Harrison. He also joined the board of directors of the Pullman Co., becoming its president.

The Lincoln family lived at Hildene from May through October most years, giving Robert Todd Lincoln the opportunity to play golf at the Ekwanok Country Club, where he served as president, and entertain notable guests, including President William Taft.

In 1975, Peggy Beckwith, the last Lincoln family member to live at the mansion, died. As her grandmother, Mary Harlan Lincoln, had requested, Beckwith left the property and its original furnishings to the Christian Science Church with the stipulation that the estate be maintained as a family memorial.

The church was unable to fulfill the request, and a group of local citizens, the Friends of Hildene, won the right to purchase the property. The group opened the estate to the public in 1978.