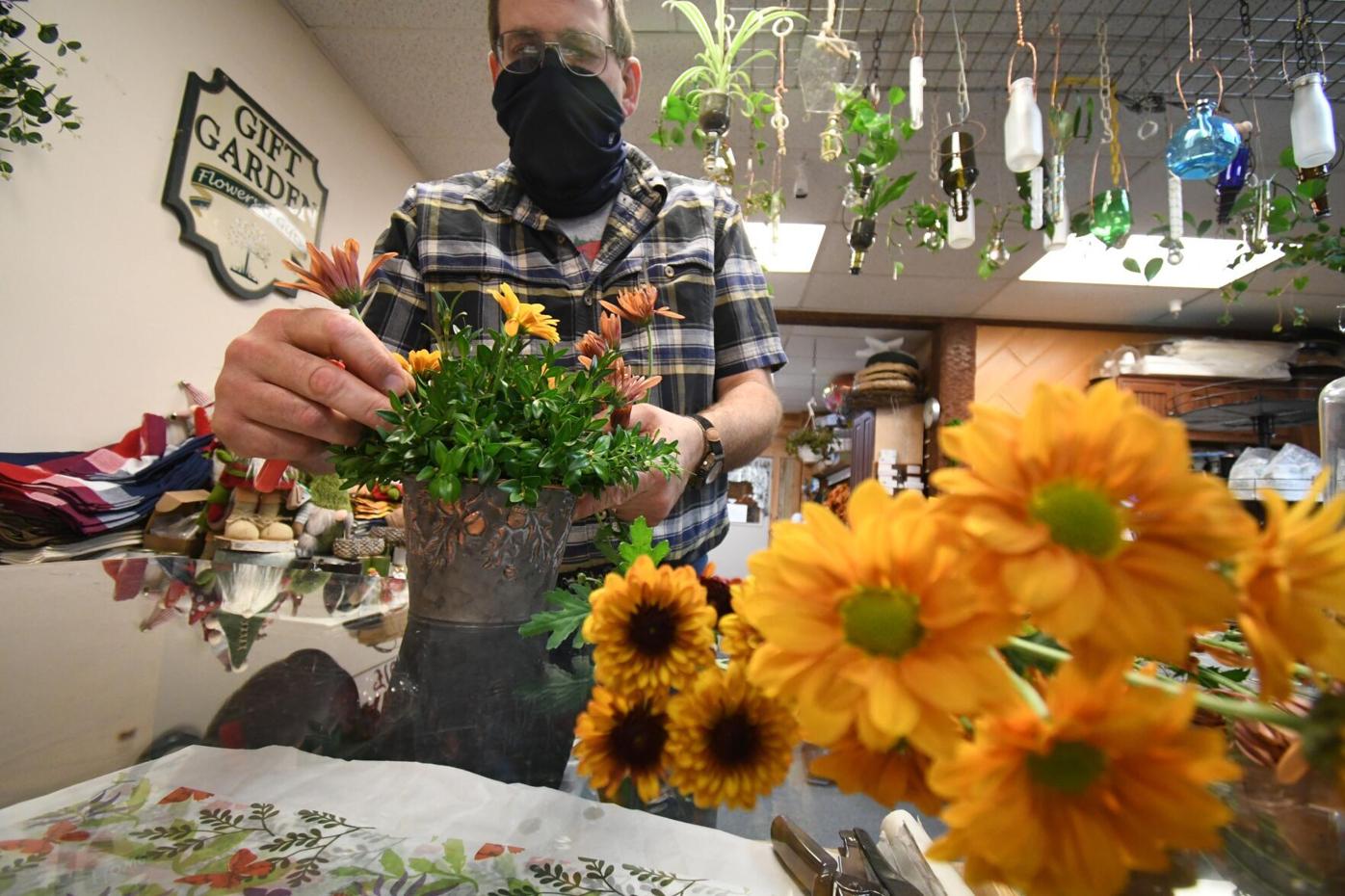 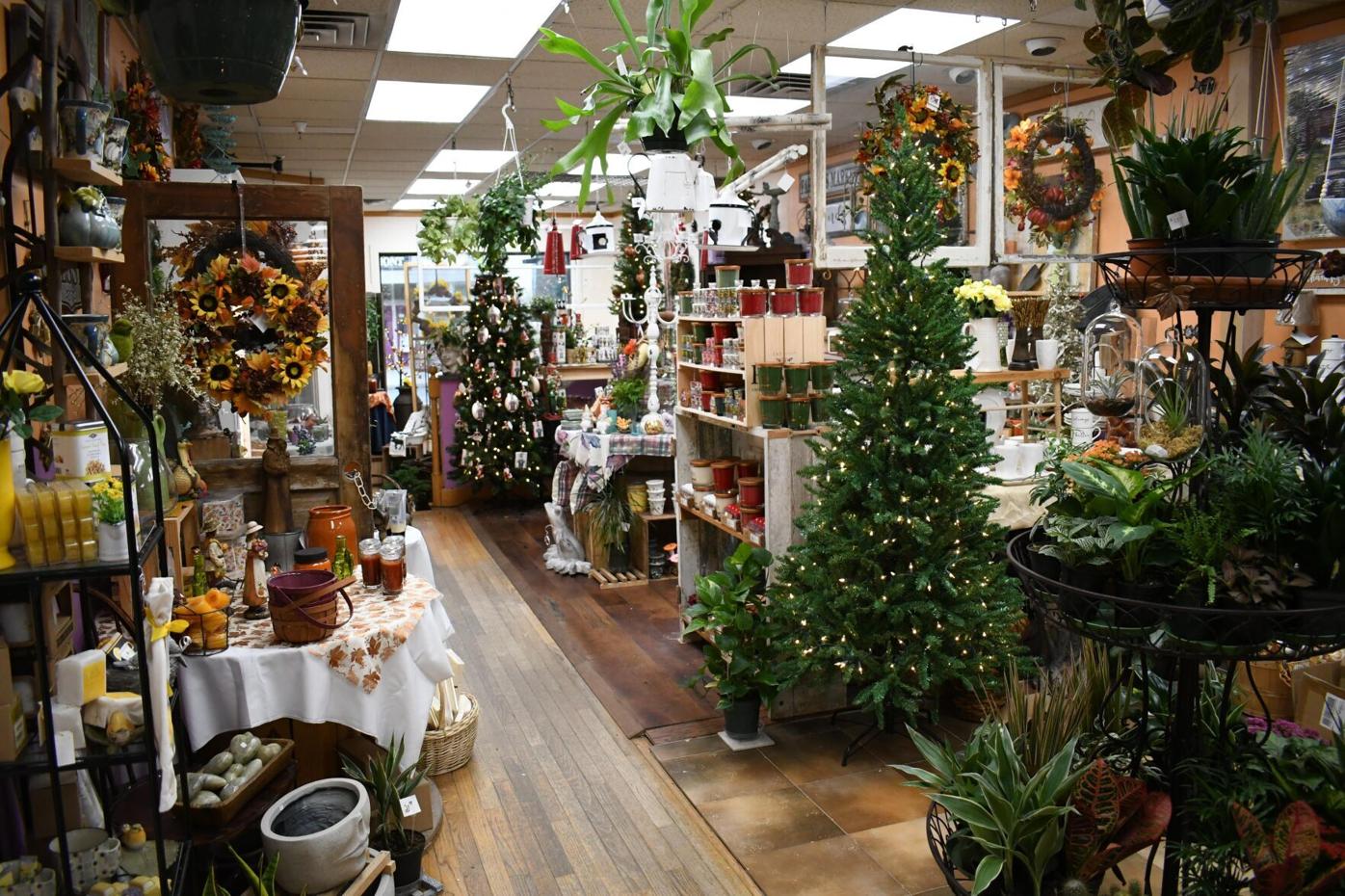 The Gift Garden, located at 431 Main St. in Bennington, has 900 more feet of space than its prior location. 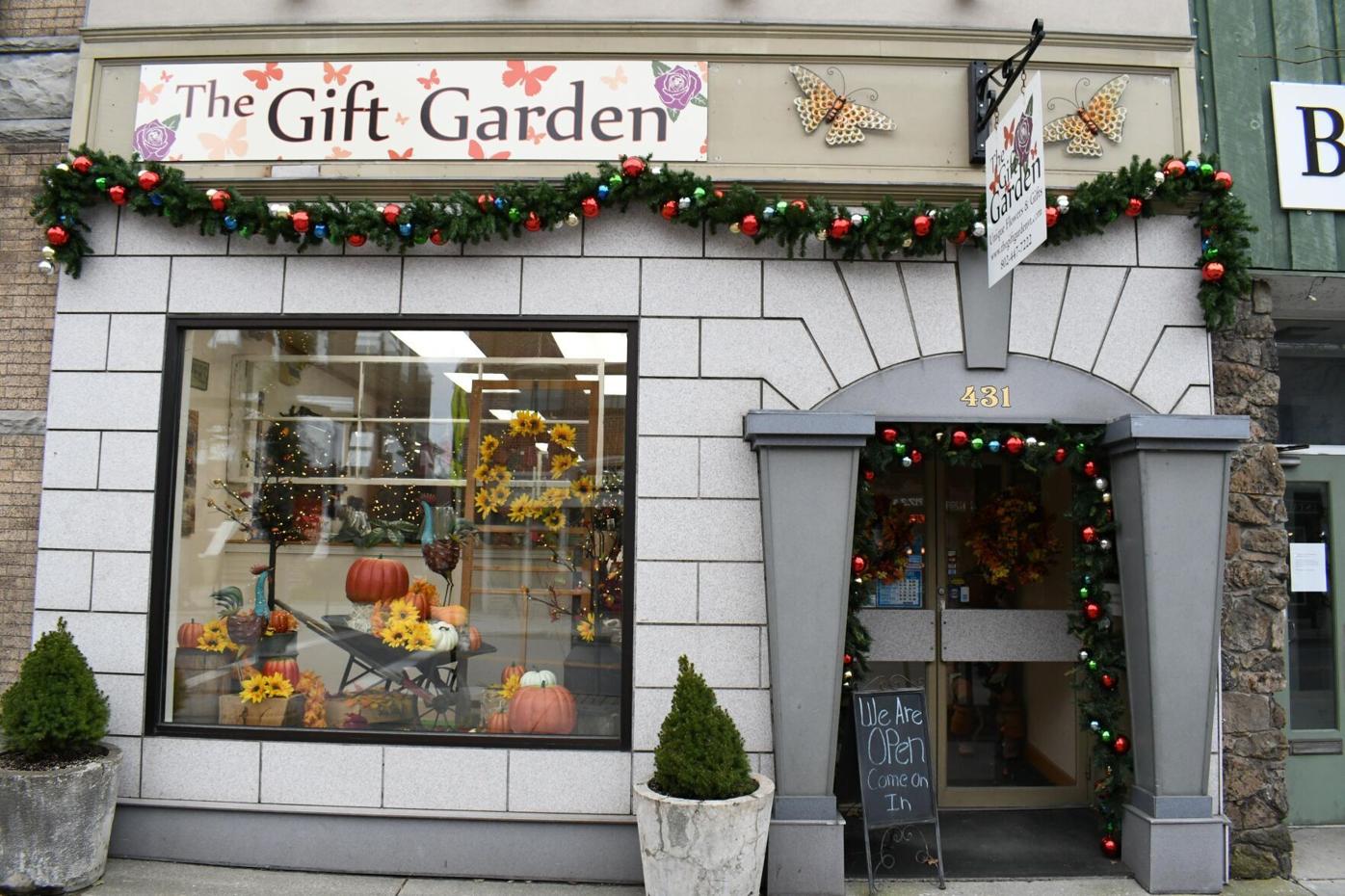 The Gift Garden is located next door to the Bennington Banner offices on Main Street. 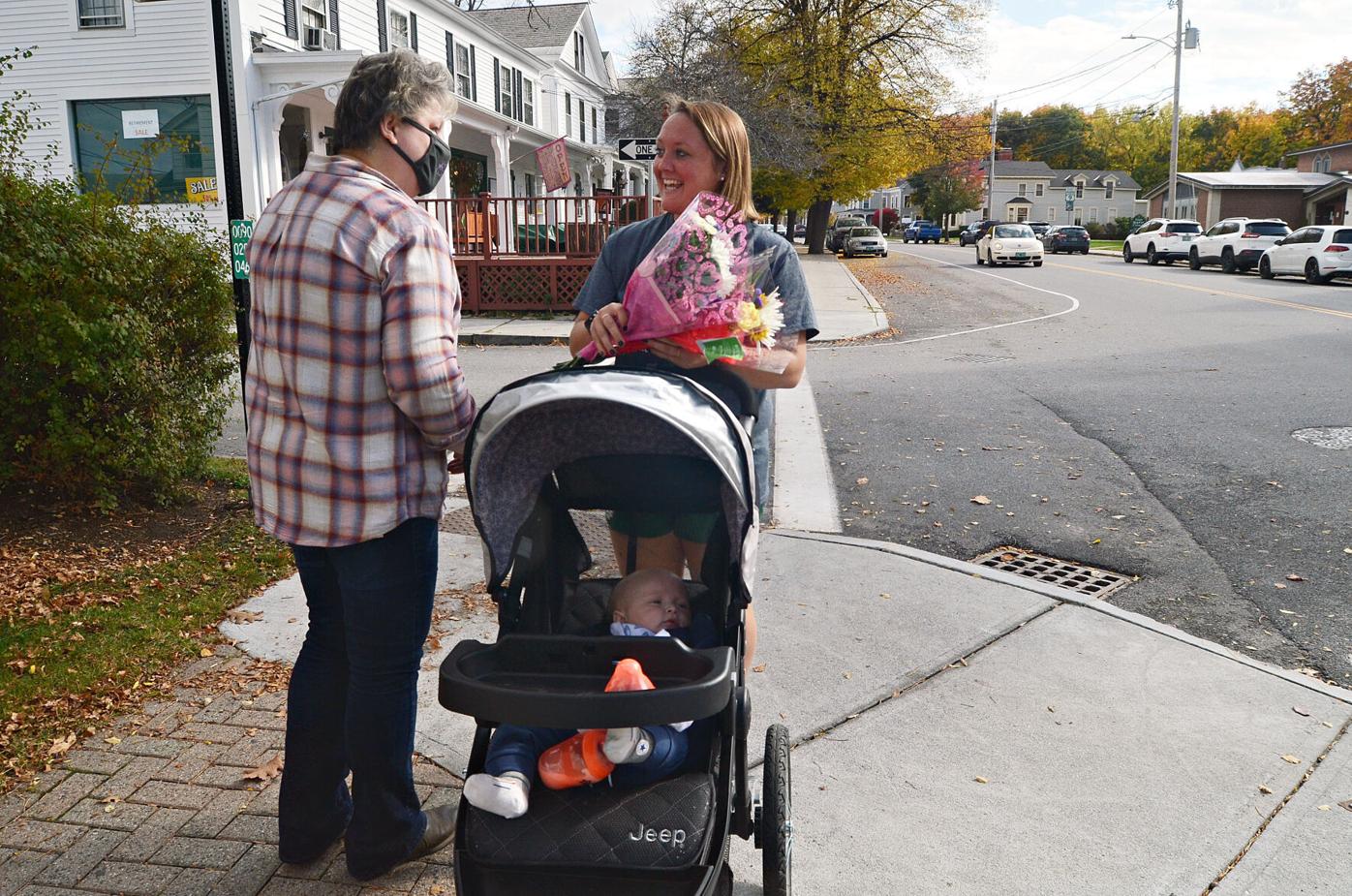 Beth Wilwol of The Gift Garden in Bennington surprises a mother on Main Street as a part of Petal It Forward Day, a national movement to spread joy by randomly surprising people on the street with flowers. 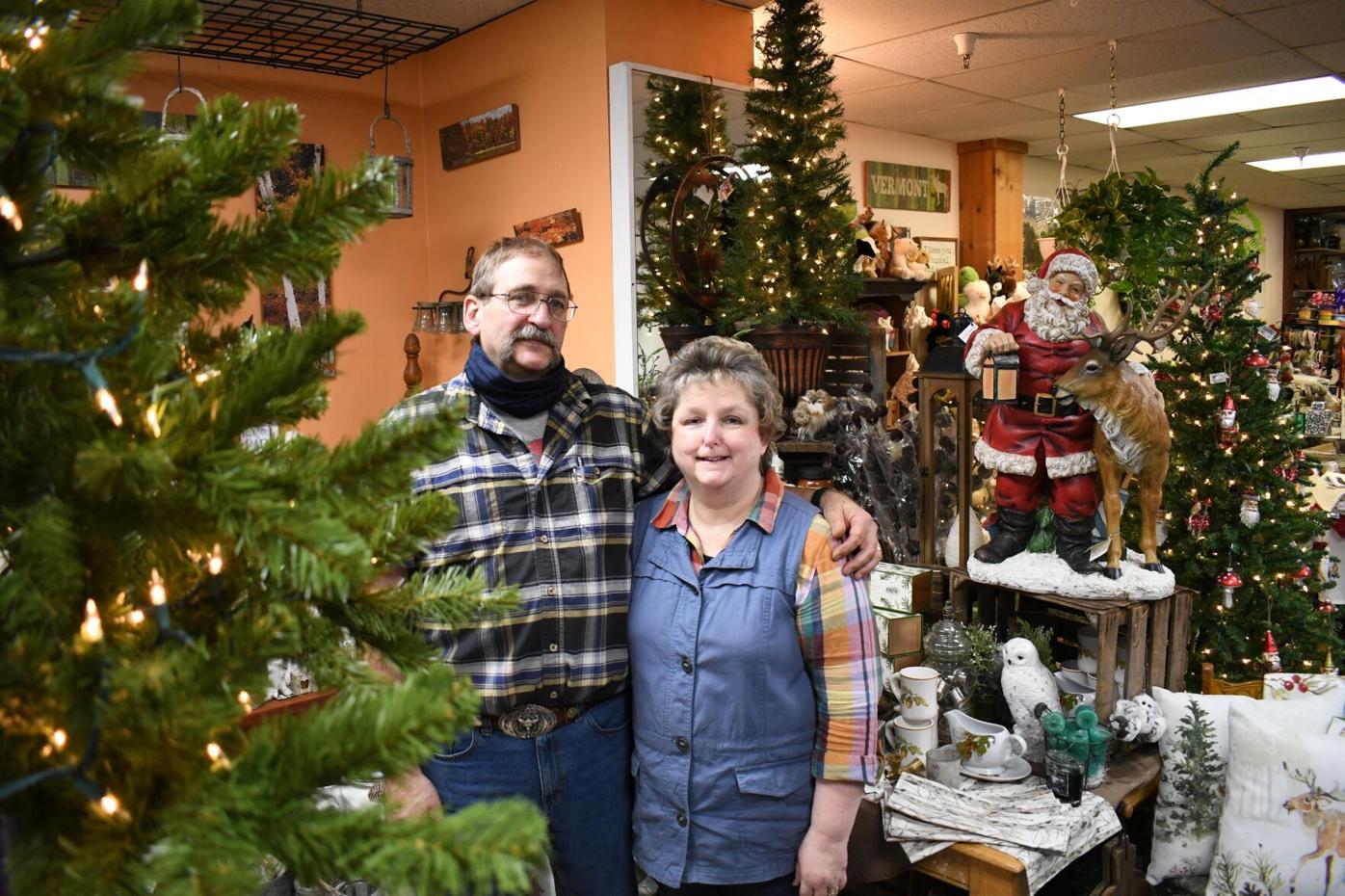 Dwain and Elizabeth Wilwol of The Gift Garden. Call 802-447-7222, email garden33@myfairpoint.net or visit thegiftgardenvt.com to place your flower order today. 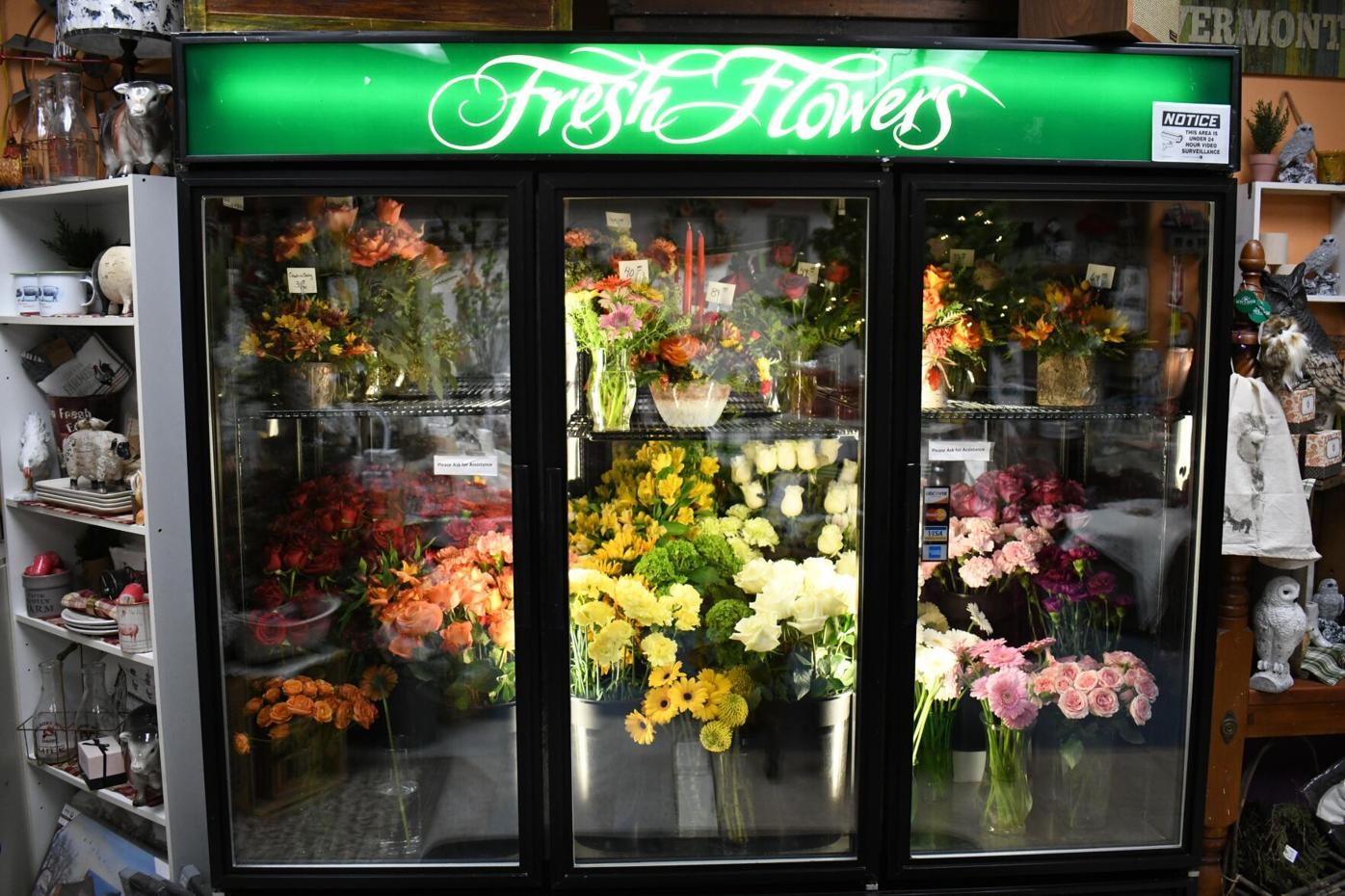 The Gift Garden takes pride in the quality of its flowers.

The Gift Garden, located at 431 Main St. in Bennington, has 900 more feet of space than its prior location.

The Gift Garden is located next door to the Bennington Banner offices on Main Street.

Beth Wilwol of The Gift Garden in Bennington surprises a mother on Main Street as a part of Petal It Forward Day, a national movement to spread joy by randomly surprising people on the street with flowers.

Dwain and Elizabeth Wilwol of The Gift Garden. Call 802-447-7222, email garden33@myfairpoint.net or visit thegiftgardenvt.com to place your flower order today.

The Gift Garden takes pride in the quality of its flowers.

BENNINGTON — When Gov. Phil Scott ordered a lockdown back in March and ruled Elizabeth and Dwain Wilwol’s flower and gift shop as non-essential, Elizabeth Wilwol decided to contact the executive office to explain to him: “We are essential.”

Wilwol and her husband are the owners of The Gift Garden at 431 Main St., just next door to the Bennington Banner offices; the Banner and The Berkshire Eagle have the same parent company, New England Newspapers Inc.

She says when the lockdown order came, the governor’s office allowed them to keep the business open, but their storefront had to close. They were able to do curbside pickups and no-contact deliveries.

The Wilwols, of neighboring Pittstown, N.Y., have been with The Gift Garden for a combined 35 years, first as employees and then as owners, buying the business from the previous owner in 2015.

Heading into 2020, like the rest of us, they had no idea what the year had in store for them. On March 17, when the governor shut down restaurants in the state, Elizabeth and Dwain were a little concerned about the future of their business.

When March 25 came, and the business was deemed non-essential, the Wilwols weren’t having it, the couple says.

Moreover, they were riled because big-box stores and supermarkets, which were deemed essential, were selling flowers and plants to the public.

With their determination and the governor’s allowance, The Gift Garden survived the lockdown.

At first, they thought they would shorten store hours but, “It ended up that we were here from 8:30 to 6 during the whole entire shutdown,” says Dwain Wilwol.

Adds Elizabeth Wilwol: “There was not a day that we didn’t conduct business; some things we didn’t have, but we did have something that customers were willing to substitute.”

There were also major supply and demand hurdles to overcome. For one, normal bulk flower purchasing had been upended by travel restrictions and business closures. Luckily, Flower Farms reached out and contacted The Gift Garden and was able to connect the Bennington shop with other wholesalers and flower distributors in a similar situation.

The Gift Garden owners were skeptical at first, because they couldn’t see what they were buying, the couple says. But, “they really came through when we needed them to. We would order what we needed one day, and it was here the next,” says Dwain Wilwol.

During these days where internet shopping is hitting new record levels, Wilwols want flower customers here and elsewhere to know how important it is to buy locally from your neighborhood florist, and to beware of middlemen that charge hefty fees in between the grower and the merchant.

“They (order gatherers) are not flower knowledgeable. They’re in a cubicle, just taking the consumers’ money,” says Elizabeth Wilwol. A $100 arrangement through an online order gatherer might land a local business $30, and for $30, a local merchant can’t hand over an arrangement worth three times that. “If you’re going to shop online, use a real local florist.”

What The Gift Garden offers is not your ordinary bouquets, like those found at a supermarket.

“We buy quality, and we try to explain that to the consumer. We get flowers every day of the week. We get access to wholesalers, who come every day. We pick and choose. We buy the freshest quality there is to buy,” says Elizabeth Wilwol.

Even with the economic challenges faced by many businesses, The Gift Garden has benefited somewhat from restricted travel: There were more flowers ordered on Easter and Mother’s Day than in years prior.

“It was unbelievable. Even with our storefront closed, we put in 97 plus hours in the store on Mother’s Day week. We sold out of every hanging plant and every fresh flower arrangement. It was the busiest holiday we’ve ever seen in a very long time.”

Dwain Wilwol has another full-time job, working afternoons and evenings as campus security supervisor at Hudson Valley Community College; he works at The Gift Garden in the morning and early afternoon.

The pair also care for Dwain’s mother, 83, who has dementia; they have hired help four days a week now for that, with Bennington Project Independence closed because of the pandemic.

Lots of gifts for the holiday season

With the Banner’s help, The Gift Garden will be able to widely broadcast its new offerings: a new gift web page has been live for a month, including a baby line; women’s tunics and leggings; wraps, purses, scarves and hats; soaps and bubble baths, as well as seasonal paper products, such as facial tissue, paper, cloth napkins and table runners. The shop sells silk and dried flowers, potpourris, framed prints and more.

There are lots of under $20 gifts, helpful for Yankee swaps or Secret Santa events in the workplace.

The Gift Garden’s mainstay, cut flowers, start at $1.50 per stem, up to $15 to $20 per stem, depending on the variety. Arrangements start at about $40, but The Gift Garden will create something less expensive to suit consumers’ needs.

The Gift Garden is one of a number of businesses throughout the region that will receive print and digital marketing grants from the state, via the Bennington Banner.

Banner Advertising Sales Manager Susan Plaisance applied to the state for the $3,000 technical assistance grant, and also has been working with dozens of other businesses to get their online presence raised for the holiday shopping season. They’ll all be included in The Shires of Southwestern Vermont Digital Holiday Marketplace, a compendium of made-in-Vermont wares in a digital platform; that, too, was paid for with a $10,000 state grant.

In landing its grant, The Gift Garden additionally will get a marketing and advertising plan that includes a sponsored content article on the Banner website and in print, and also in regional newsletters; related social media pushes, and a series of digital ads.

The Wilwols love their jobs, and the community knows it. With Petal It Forward, a national goodwill event in which The Gift Garden has taken part for the past four years, the flower shop hands out bunches of flowers to total strangers, one for them to keep and one to pass on to someone else.

“Usually Dwain hands out the flowers for Petal It Forward. This year, I was able to do it. Dwain said, ‘You’ll see what it’s all about.’ He was right,” says Elizabeth. “The reaction of how happy it makes the recipient, even with a mask on, you could tell. I was on Cloud Nine for the rest of the day. It makes my job not really a job. It makes what we do all worthwhile.”

In addition to getting to know the business inside and out before they finally bought it, the Wilwols themselves approached their marriage the same way: they dated at Hoosick Falls High School, went their separate ways and got together again a little later in life. Today, they’re looking back on 31 years of marriage.

First opening in 1976, The Gift Garden was formerly located in the Winslow building, seven doors down from its current location. Starting out, Elizabeth did the flower designing, and went on to do the purchasing and merchandising; Dwain did the floral deliveries and took care of the plants.

These days, they’re still working together, splitting the duties, with Dwain even returning to school to learn the art of flower arranging. “It’s a 50/50 relationship,” says Elizabeth. “We work well together.”

Adds Dwain,”A lot of people can’t believe we can do both.”

The Gift Garden delivers to Southwestern Vermont and nearby New York but has the ability to send flowers all over the world by partnering with other local florists. The Gift Garden is open from 8:30 a.m. to 6 p.m. Monday through Friday, from 8:30 to 2-ish on Saturday, and on Sunday afternoons during the holiday season.