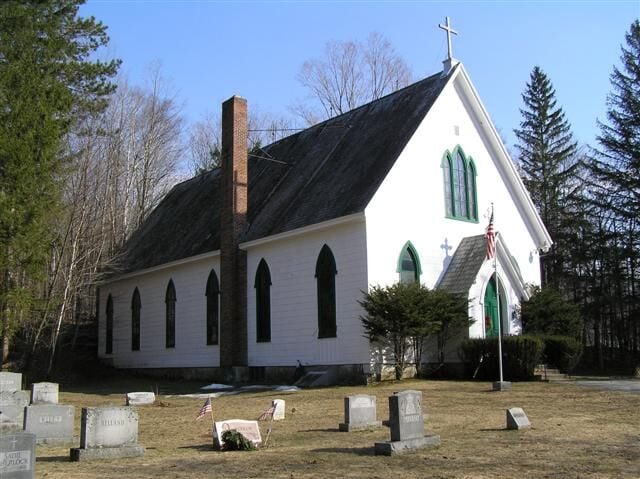 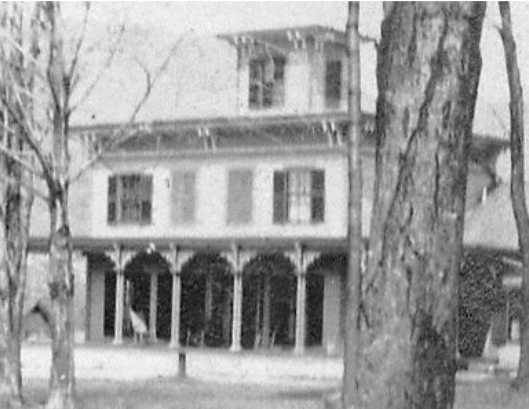 Catholic parsonage in East Dorset, circa 1900.

Catholic parsonage in East Dorset, circa 1900.

Tucked away off Mad Tom Road in East Dorset there was a little chapel surrounded by pines. It is no longer there, since 2017, but perusing the church’s sacramental records, one has a window into 19th century East Dorset and who was born, married and died here.

The Vermont French-Canadian Genealogical Society recently compiled all the marriage and baptism records for three local Catholic parishes. The genealogy of families who were Catholic church members during the years 1860-1961, for three parishes: St. Jerome’s in East Dorset, St. Columban in Arlington, and St. Paul in Manchester, VT can now be traced.

In addition to these three Catholic parishes, there were “missions” in Danby, Wallingford and Mount Holly where Sunday worship (Catholic Mass) could be performed — in private homes, if necessary. Over this period of 101 years, 1,166 marriages were performed — 645 at St. Jerome’s alone. From those 645 marriages, 3,136 baptisms ensued.

Many of the earliest diocesan records were written in Latin and had to be transcribed to English to be made useful to later generations. Information relating to the specifics of race, illegitimacy, adoptions or marriage annulments existed at the diocesan level but were not publicized.

The first recorded priest serving the area was an itinerant one, the Rev. John B. Daly. He celebrated the first Masses by visiting members’ private homes of the quarry workers on the east side of Dorset Mountain. Father Daly retired from this assignment in southern Vermont in 1854. The large old Catholic cemetery remains on Dorset Hill Road along with two small family plots.

In 1855, a church was constructed in East Dorset Village on a small piece of property bought from Ira Cochran, whose own house was right across the road, now known as Village Street.

The Rice/Harwood map shows this church immediately to the right, or east, of the railroad tracks. This location enabled the families of those working on the railroad or nearby mills and quarries to have easy access to daily or Sunday Mass. There is no record of a rectory for the priest at this time.

Rev. Thomas J. Gaffney became the first resident pastor in 1868. The Beers Atlas labels a building along East Street (Mad Tom Road) as the “R. C. Ch Parsonage.” In 1869, this building was purchased for him by the Catholic Bishop in Burlington from Mr. William Hulett Jr.

Mr. Hulett had been farming in North Dorset, and apparently had planned to move his household into the village, living in this fine home he had built for himself. These plans were never fulfilled as he died in 1867, at age 58 of consumption — today’s tuberculosis.

The building reflects the high style of the day: an Italianate, with a widow’s walk at the roof crown. The house features a four-square main block and central doorway. Elongated ceiling to floor windows and shutters are sheltered by a wraparound porch, the pillars with decorative brackets forming archways between each pair. The roof eaves are notable for their pairs of decorative brackets placed beneath the extended roof overhang.

The house was elegant and over-sized for just one priest and a housekeeper at a time. Maybe that’s why Father Gaffney advertised the property for sale shortly after buying it. The 1872 ad read: “Wishing to build a church and needing funds for that purpose the subscriber offers for sale this CATHOLIC PARSONAGE in East Dorset, consisting of a fine residence and an acre and one-half of land nicely fitted up at great expense. The whole forms one of the finest residences in the country; and will be sold on reasonable terms.”

Apparently, Rev. Gaffney changed his mind, for the house remained as the priest’s residence. Ads from then on were for various fund-raising events hosted by him, until the new church was finally built and completed in 1874. The original, smaller church was sold to a group that subsequently began the Village Street cheese factory on that site.

Catholic parishioners coming to East Dorset to worship had numbered 900 during 1868. They traveled from several outlying communities. Thus, a new, larger church was built on Leary Lane in the neo-Gothic style, very similar to the earlier Union Society church down East Road at Village Street. The church was dedicated in August 1874. Mr. D. L. Kent, one of the local marble quarry owners, donated the marble block front steps.

The people who first formed this parish were either the immigrant generation or first generation born here. Many entries in the French-Canadian Genealogical Society’s records state “Groom‘s parents born in Ireland,” or “Bride and groom are both from Ireland” without specifying exactly where home was.

The Digons, Whealens, Sheridans, Cassidys, Caissys, and the McCormacks mostly came from County Kilkenny – a coal-mining area. Perhaps they were ideally suited for working as stonemasons in the marble quarries? Maybe they were plenty happy to exchange the black coal dust of Ireland for the white marble dust of Dorset.

The Irish were not the only immigrant community to come to the area. Many French-Canadians also arrived, most of them also Catholic. What’s evident from these church records is how the French names were Anglicized as part of their assimilation process. Morin became Murray, Mereaux became Merrow, Courtemanche translated to Shortsleeve, Prudhomme became Wiseman; Roi translated to King, or simply Roy.

What a scene it must have been at church on some Saturdays when the itinerant priest was in town! For example, on January 13, 1861, three Irish couples were married at the old church by one of the itinerant priests. One couple’s parents came from Roscommon County, while the other couples had origins in Kilkenny and Limerick. Were they considered a “mixed marriage?”

Were they married all in the same service or were there separate ceremonies? Did the priest line them all up in a row in front of the altar railing? The records don’t say, but it’s fun imagining. This was well before brides began wearing white at their weddings, so no imaging them all in white. So long as the clothing was clean and in good repair, it would suffice for the immigrant generation.

On another Saturday, Nov 23, 1887, two brothers married two sisters in the new church; the brides, grooms and official witnesses were ALL either Brousseaus or Charbonneaus. Signing off as the official witnesses for each other’s marriage, we know which couple was married first: the bride from the first ceremony is listed as “Mrs.” as a witness for the second ceremony.

The records don’t always tell all the tale: Why was a couple married by a priest, at home, with no witnesses? Two witnesses were normally required, although they didn’t have to be Catholic.

Was it a deathbed scene, or perhaps the imminent birth of a child? It meant eternal damnation for the infant should it die unbaptized. Perhaps the off-site marriage was between a Catholic and non-Catholic? The priest performed the marriages off-site if a Catholic was marrying a non-Catholic.

Over the years, the ethnicities of the priests changed — they were not always French or Irish Catholic priests, although their ethnicity used to coordinate with their assignments. A Polish priest served the area for part of the twentieth century, having as his housekeeper both his mother and then a sister from Poland.

There never have been nuns assigned to St. Jerome’s, nor a Catholic school of any kind.

Today, the rectory still stands as a private home, and one of the largest and most beautiful homes on Mad Tom Road it is. Due to the shrinking number of parishioners and the expense of operation, the little chapel in the pines was closed in January 2009. It was dismantled in 2017 — its chestnut pews, stained glass windows, slate roof and timbers salvaged, sold and recycled.

The cemetery is still active with descendants of the original church members still being buried there. Some of those same early names continue in Dorset today, while the parish members now attend services at St Paul’s in Manchester.

Michele Pagan is a recently-returned native Vermonter. She is a textile conservator in private practice, and a member of the Dorset Historical Society and the Bennington Museum. She can be reached at Mpp1@comcast.net.