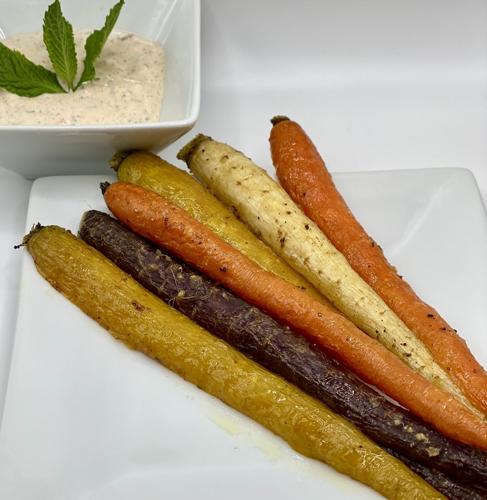 Roasted Carrots with Harissa Yogurt is a healthy option that can be prepared with farm-fresh vegetables. 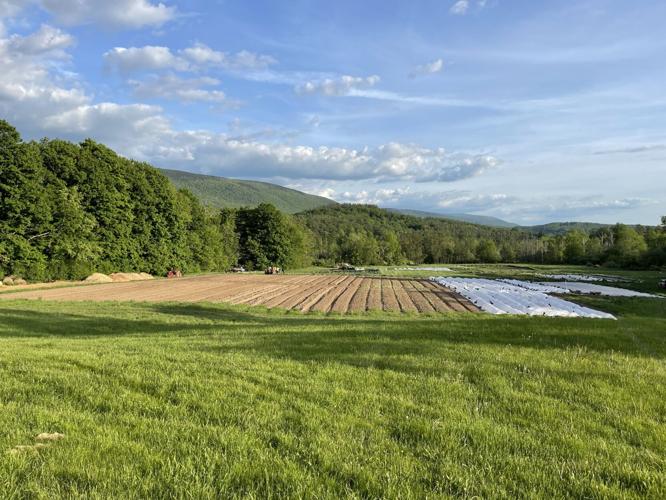 Two Vermont farmers who are focused more on doing right by their land and the community and less on labels are Oliver and Bonnie Levis of Earth Sky Time Community Farm in Manchester.

Roasted Carrots with Harissa Yogurt is a healthy option that can be prepared with farm-fresh vegetables.

Two Vermont farmers who are focused more on doing right by their land and the community and less on labels are Oliver and Bonnie Levis of Earth Sky Time Community Farm in Manchester.

It may feel that, collectively, these are the toughest times we have faced as a globe during many people’s lifetime. My mother remembers World War II, but doesn’t have vivid memories of it except for being shipped to her grandparents’ house in Newfane while her father was in the Navy in D.C. My father remembers more, as he was a bit older and in England at the time. He remembers seeing bombs explode over London in a blitzkrieg as a little boy and recalls being sent to the country where it was safer.

Of course, rations were common, even here in the U.S., during the war and shortly after. Having received margarine instead of butter, my mom and her brother would play catch with the bag of oleo, seeking to spread the little bud of yellow food coloring throughout the white substance, turning it the color of butter. Their job was revoked when one of them missed it and margarine painted the kitchen wall.

I’ve known many different economic circumstances during my life, though I’ve never wanted for a meal (which was apparent by my growing waistline as a child). I’ve never had to think about sustainability. Like many, I have had the luxury of not wondering when my next meal will be and how I would obtain it. Food is one of the pillars of life, but for many, it really is a luxury.

Arguably, for all of history, there has been global conflict and strife around the world, but the U.S. has managed to either initiate the trouble, or stay out of it. There are certainly people who suffer from hunger across our country which, in a nation such as this, is inexcusable, as we find so many things are today.

If nothing more, the pandemic may have taught us how delicate our supply chain is as a nation. It’s demonstrated just how dependent we are on large food companies, and also on farms, large and small. These supply chain issues have been coupled by the war in Ukraine and projected shortages of wheat. To compound matters even more, inflation has forced us to sit back and watch grocery prices tick up on a weekly, if not daily, basis.

These dilemmas beg the question: “How do we sustain our families on a daily basis while creating a sustainable food chain?”

Dr. Mark Hyman pointedly projected in his book “The Food Fix,” that in 60 years, our soil will be so compromised and devoid of nutrients, we will no longer be able to grow food to provide enough nourishment for Earth’s inhabitants. The default practices that most large-scale agricultural operations employ are not sustainable. Plastics are perpetually used in agriculture. Our foods are sprayed with insect repellant and weed killer before we ingest it. Foods are shipped around the globe, showcasing labels that highlight their original, coveted destination. We grow tons of food to feed cows corn they were never meant to ingest, while feeding farmed animals and fish low doses of antibiotics, contributing to our own antibiotic resistance.

Soil health and the developing consciousness about plastic use and recycling has sponsored many movements around the country and in Vermont specifically. It should come as no surprise that Vermont tops the list as the greenest state (and they’re not just citing those lush, summertime green mountains). As during most of the pandemic, Vermont continues to set an example of what to do during times of crisis. For many, living “sustainably” is a lifestyle. For many more, it’s become a trendy fad. But if sustainability is a trend we are ready to adopt, it’s good for everyone.

Having recycled for years in Townshend, it was a shock to me to move to Los Angeles where the building where I lived didn’t have a recycling program available. I would collect my plastics, cans and multiple wine bottles, lugging them to the local Whole Foods recyclables bin, tossing them in one by one. It was important to me to do something, anything, to support our beautiful Earth that we were scathingly marring day by day and hour by hour.

The organic movement started and, as more consumers turned to products certified as such, it was soon taken mainstream. The biggest food producers developed organic arms and soon “green washed” us into thinking that any food they processed “organically” was healthy. Organic products can contain up to five percent inorganic products (thank you, USDA) but are still labeled “certified organic.” Organic products can also contain inorganic ingredients IF there is not an organic alternative. Even organic natural flavors can contain chemicals and preservatives.

As the organic label began to lose its validity, grassroots movements gained momentum. In January 2018, the Real Organic Project was formed by a group of Vermont farmers and has quickly gained national momentum. Over the past several years, sustainable farms have garnered focus from some environmentally conscious groups and the term ‘regenerative’ has also become popular. In regenerative farming, a farm becomes its own ecosystem where farmers focus on soil health, water conservation and using organic matter to refuel the land. Simply stated, regenerative farms are how farming began.

According to the United Nations, food sustainability is “the idea that something (e.g., agriculture, fishing or even preparation of food) is done in a way that is not wasteful of our natural resources and can be continued into the future without being detrimental to our environment or health.”

Most of us are on to the overuse of plastics and do our best to “reduce, reuse and recycle,” as my son’s toy recycling truck sings, (very often too early in the morning). First in line to innately celebrate “sustainability” without even using the term, Vermont leads the rest of the nation in this regard as well.

Two Vermont farmers who are focused more on doing right by their land and the community and less on labels are Oliver and Bonnie Levis of Earth Sky Time Community Farm in Manchester. Having met at Cornell, they have tended their farm since 2005, growing their family to six in the meantime. They’ve been a sustainable, regenerative farm in purpose since the beginning. As Oliver says, they didn’t adhere to these standards for the label, they adopted these activities because it’s “the right thing to do for the land, it’s the right thing to do for the people.” There’s something special about these words.

The farm has been certified organic for 13 years, but Oliver acknowledges that as large corporations move into the organic space, the term is losing its meaning. Earth Sky Time attends seven farmers’ markets each week including those in Londonderry, Arlington and Dorset. They have a farm shop and host summer concerts frequented by their mobile pizza oven. The Levis family invented their popular veggie burgers, VT Goldburgers, 12 years ago by using what they called “ugly” potatoes and carrots that wouldn’t sell. Instead of composting them, they turned them into their veggie burger recipe.

This sweet farm operation is an example of what needs to be done. They don’t line sheets of plastic on their rows to keep pests away, which Oliver points out most organic farms use. It’s more difficult as a production, but worth it in the long run, he says. They use soil pods in their greenhouse rather than the plastic pots employed by many of their organic counterparts. I realize that I have never thought about all the plastic used in growing, especially organic growing.

When asked what we, at home, can do to be more ecological, Oliver suggests swapping with neighbors, seemingly the Vermont way. He sells products he doesn’t make that his neighbors do, as sort of a collective. There’s power in knowing where our food comes from and that we can grow it when we need it. Many of us already implement these practices. It’s the Vermont way. Now to spread the word.

Salt and pepper to taste

1 tablespoon harissa spice (I use dry)

Scrub carrots with a vegetable brush. Trim tops and cut into half lengthwise.

Sprinkle with salt and pepper.

Bake for 20 minutes, flipping once or until tender.

Stir. Add salt and pepper to taste. Refrigerate to allow the flavors to meld.

Drizzle carrots with yogurt or serve sauce on side with mint garnish.

Recommended: prepare yogurt sauce first and refrigerate for a few hours prior to serving.

Katharine A. Jameson, a certified nutrition counselor who grew up in Williamsville and Townshend, writes about food and health for Vermont News & Media. For more tricks, tips and hacks, find her on Instagram: @foodforthoughtwithkat