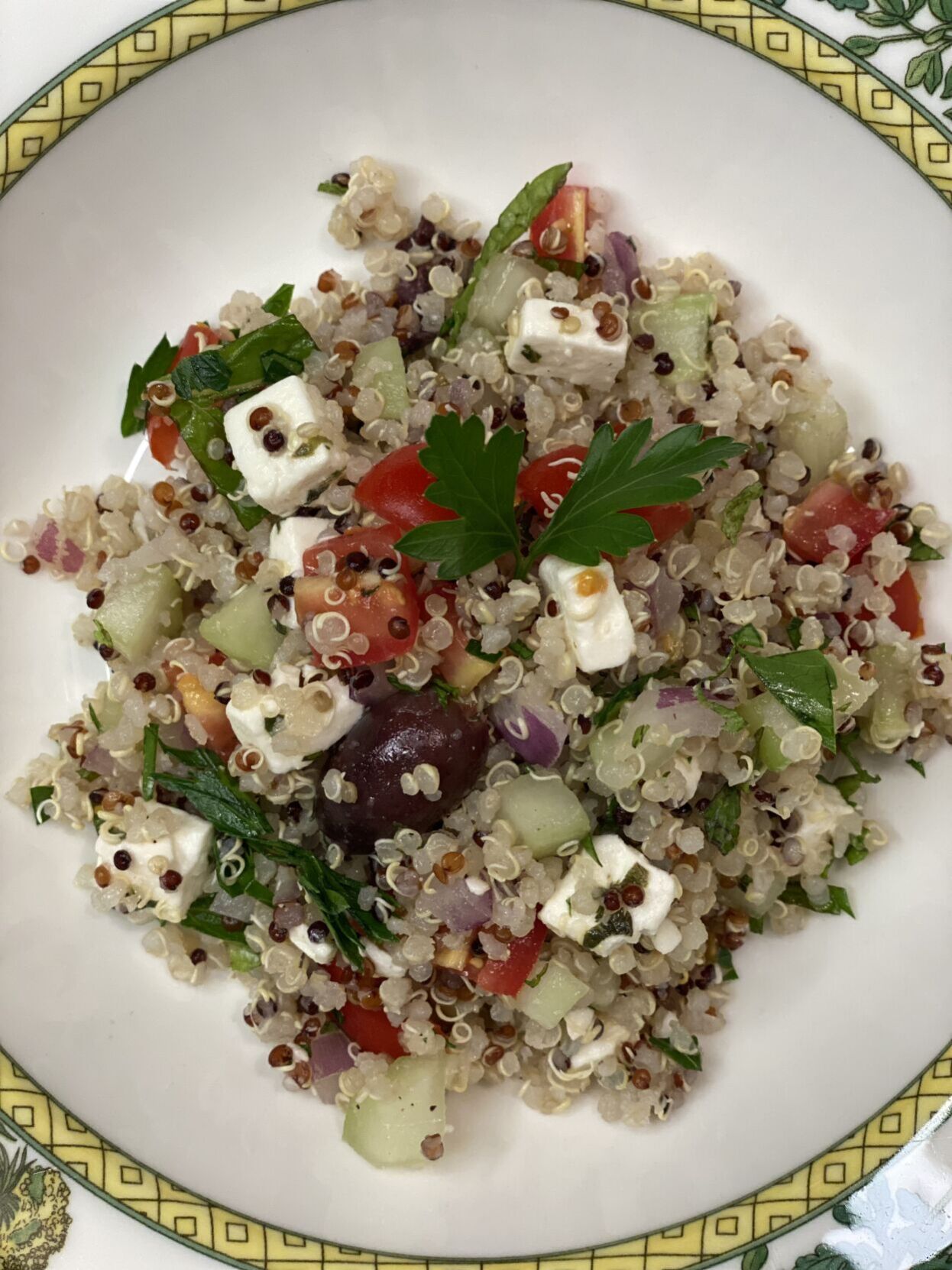 (Effortlessly Gluten-Free) Quinoa Salad is a healthy option for those seeking to avoid gluten. 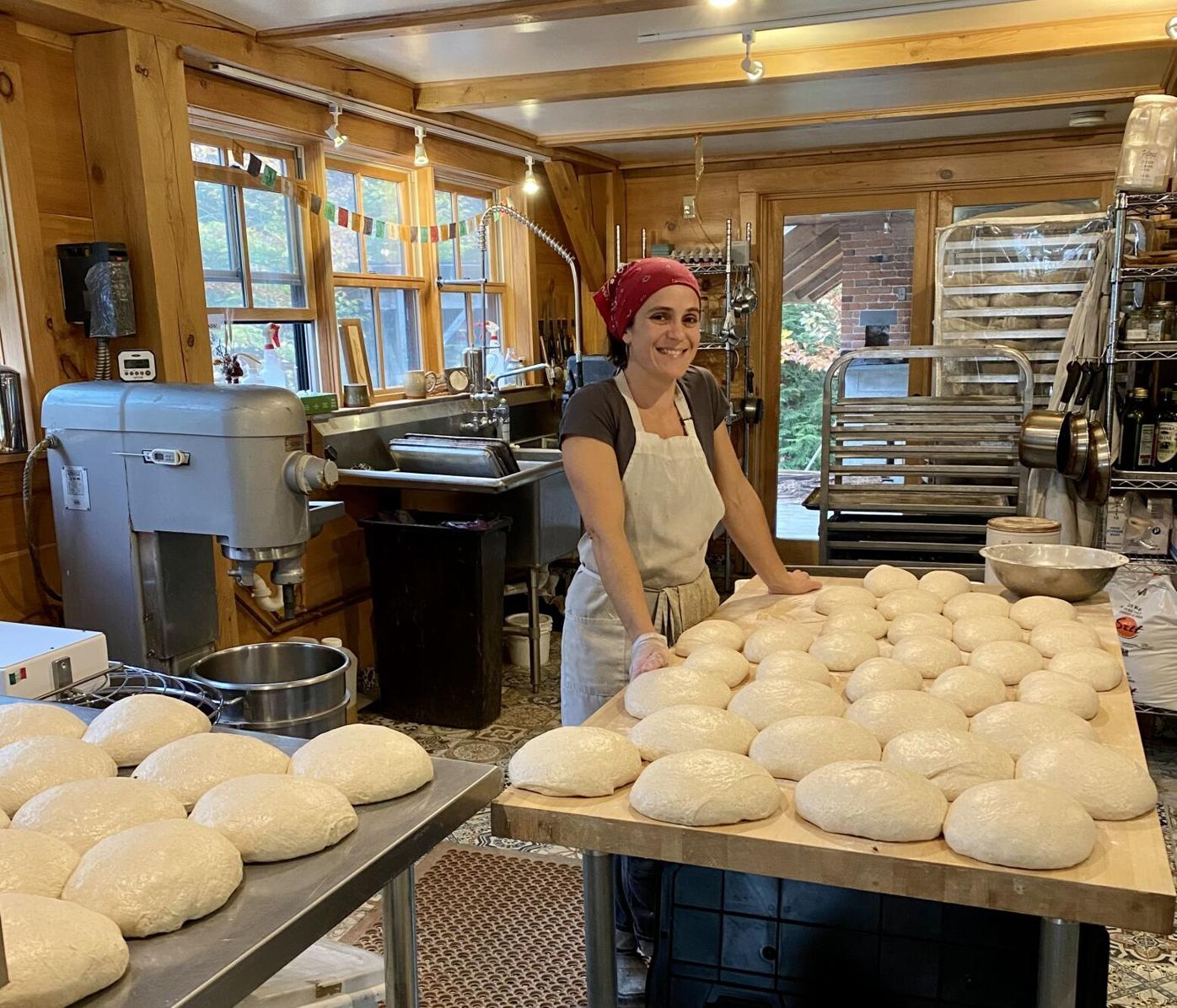 Sarah Schuldenfrei of Bread from the Earth in West Townshend. Quite literally a one-woman show, Sarah stocks local stores’ shelves and sells her organic sourdough at seasonal farmers’ markets.

(Effortlessly Gluten-Free) Quinoa Salad is a healthy option for those seeking to avoid gluten.

Sarah Schuldenfrei of Bread from the Earth in West Townshend. Quite literally a one-woman show, Sarah stocks local stores’ shelves and sells her organic sourdough at seasonal farmers’ markets.

Like many trends that catch fire in the health world, gluten-free eating is something many people, even those who don’t medically need to, have embraced for their overall health or as a weight loss tool. For individuals who have been diagnosed with celiac disease, eliminating gluten is an essential step in their recovery, but “going gluten-free” has been promulgated as a healthier way to live for everyone. If one doesn’t have celiac, is removing gluten a good way to address tummy trouble?

The term “gluten-free” is now such a household phrase, that we’ve given it the nickname “GF,” as if it were an old friend. It’s difficult to avoid because, like sugar and “natural” favors, it is a lot of places one might not expect, like in soy sauce, pickles, processed meats and ketchup. Gluten-free products are projected to increase globally from $5.6 billion in 2020 to $8.3 billion by 2025. No wonder everyone wants a piece of the pie. Gluten-free, of course.

The truth behind glutenA protein found naturally in many grains, gluten quite literally glues intestinal villi down in people who suffer from celiac disease, making it not only uncomfortable, hard to digest, but ultimately impossible to assimilate nutrients. It’s no secret that we, as consumers, constantly fall prey to Big Food, eating sugar, trans fats, flavorings and more ingredients that are secretly stowed away in our highly processed (and even minimally processed) foods. There are many foods that are naturally GF, but when the gluten gets taken out, we run into issues.

Remember the ’90s and early 2000s, when all fat was deemed evil and food companies busily set to removing it from every food they could find? Since fat gives our food the taste and ability to satisfy us, they literally took out the flavor. What did they add to get at least nominal taste back? Why, sugar, of course!

It isn’t as though glutenous grains are bad for us nutritionally. Plenty of healthy grains contain gluten, and these include wheat, barley, rye and spelt. With foods that are processed to get the gluten out, they are just that — highly processed. Whenever something gets treated, its integrity is compromised and some of its nutrient content is inevitably lost. Many processed gluten-free foods become higher in not only fat, but in sugar as well, thanks to added ingredients like tapioca, potato or corn starches, or rice flour. In conjunction with added sweeteners, the sugar content of these products can equal that of a candy bar.

Some grains canceled by the GF movement are not only high in fiber, but in essential nutrients. Couple this with the poor nutrient content of our soil, and even the most “overnourished” among us can be nutritionally malnourished. Ultimately, unless we walk a fine line in the gluten-free world, we risk becoming undernourished, developing type 2 diabetes, gaining weight and losing out on our coveted fiber.

Nutritional theories are just that — theories. Many of them take an entire group of foods and vilify them, placing them into “bad” categories, advocating that people steer clear of them altogether. This has been done with nearly every food group, but fad diets have little longevity. In reality, when we steer clear from an entire food group, that spells trouble. The next time we see anything belonging to one of these forbidden groups, we dive in … headfirst with carb-loving gusto.

Sourdough though?The art of sourdough has recently taken the artisanal bread world by storm. Beautifully baked and perfectly seeded loaves decorate storefronts from coast to coast, but it turns out that not all boules are created equal.

Stepping into Sarah Schuldenfrei’s beautiful bakery, Bread from the Earth, just up the road in West Townshend, one is transported to thoughts of Italy with her Mediterranean tiled floor and laid-back style. She expertly weighs and rolls baguettes and loaves of country white sourdough as we talk. Quite literally a one-woman show, Sarah stocks local stores’ shelves and sells her organic sourdough at seasonal farmers’ markets.

Our discussion takes a turn from how she got started (she trained with Earth, Sky, Time in Manchester) to her sourdough starter — a living, breathing, artistically cultivated wild yeast she likens to a business partner. She takes it on vacation with her or gets a starter sitter — all a very serious and fascinating business. Sourdough starter takes yeast and bacteria from its environment, so the end product will reflect the locale in which it was made.

Sourdough bread baking has taken on a fashionable feel in some circles, but the truth behind the sour induing fermentation process makes this bread not only delicious, but more easily digestible, higher in bioavailable vitamins and … lower in gluten. The 24-hour process sponsors proteases, a protein digesting enzyme, that “eats” the gluten, thereby decreasing it — sometimes below the 20 ppm, the level under which a food’s gluten concentration must measure to be labeled GF.

What to do?If you’re certifiably gluten-sensitive, and not overlooking another possible health condition, seek naturally gluten-free products, whether they’re born that way, or fermented so that the gluten levels decrease. When the GF craze really got going in 2012, potato chips, which are inherently gluten-free, were awarded a 456% increase in sales. This was simply because they were labeled as such, not because the recipe had changed. Very often, the GF label gives us the same sense of safety that the term “natural” does, but not all naturally GF foods are healthy choices either.

Quinoa, sorghum, buckwheat, amaranth and oats are gluten-free and provide fiber, protein and lots of other vitamins. Rice is naturally free of gluten as well, but elevated arsenic levels in our soil makes it a poor choice for daily eating. As oats are grown and processed with glutenous grains, it’s important to make sure they’re labeled GF if that’s important to you.

Add salt and pepper to taste. Dress with desired amount.

Katharine A. Jameson, a certified nutrition counselor who grew up in Williamsville and Townshend, writes about food and health for Vermont News & Media. For more tricks, tips and hacks, find her on Instagram: